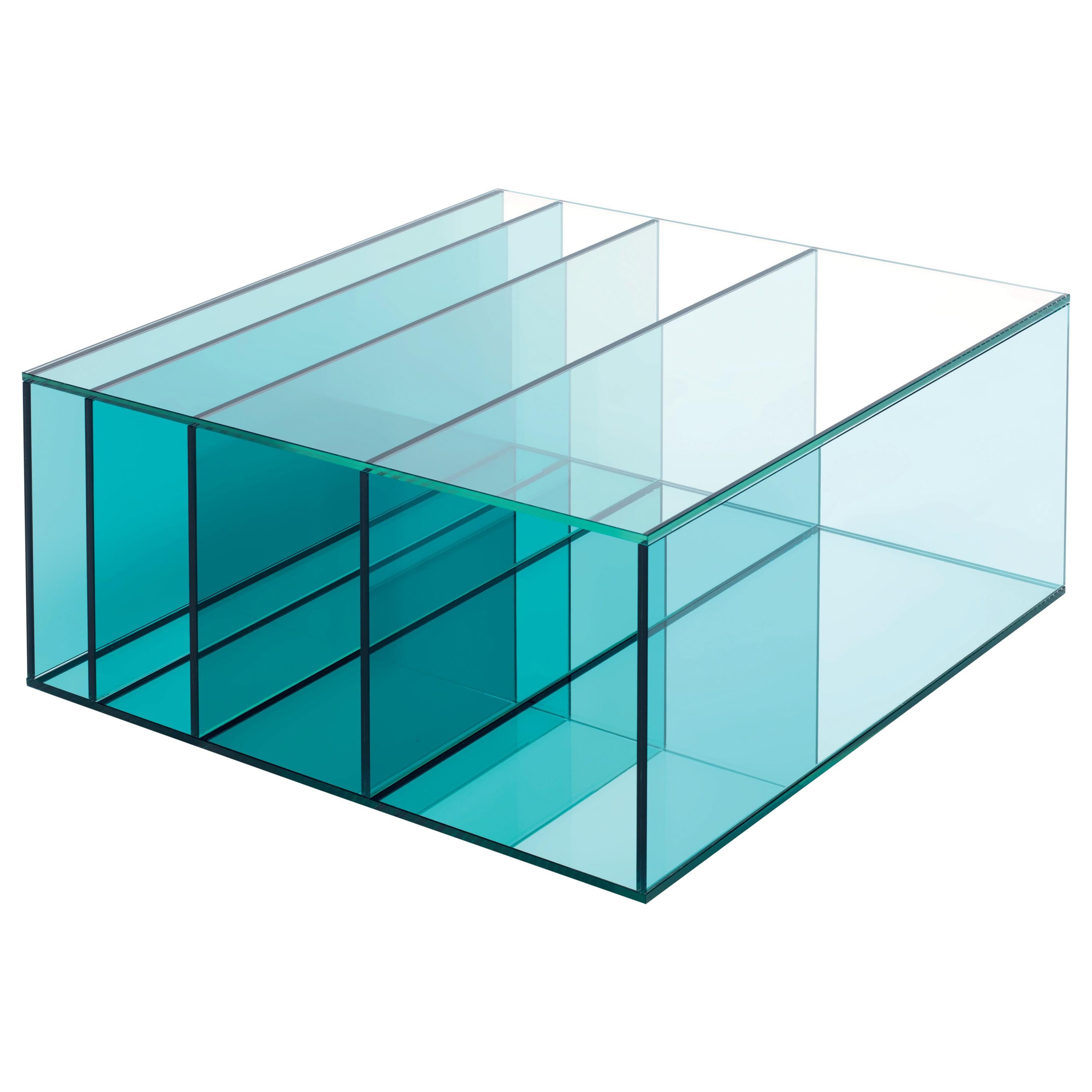 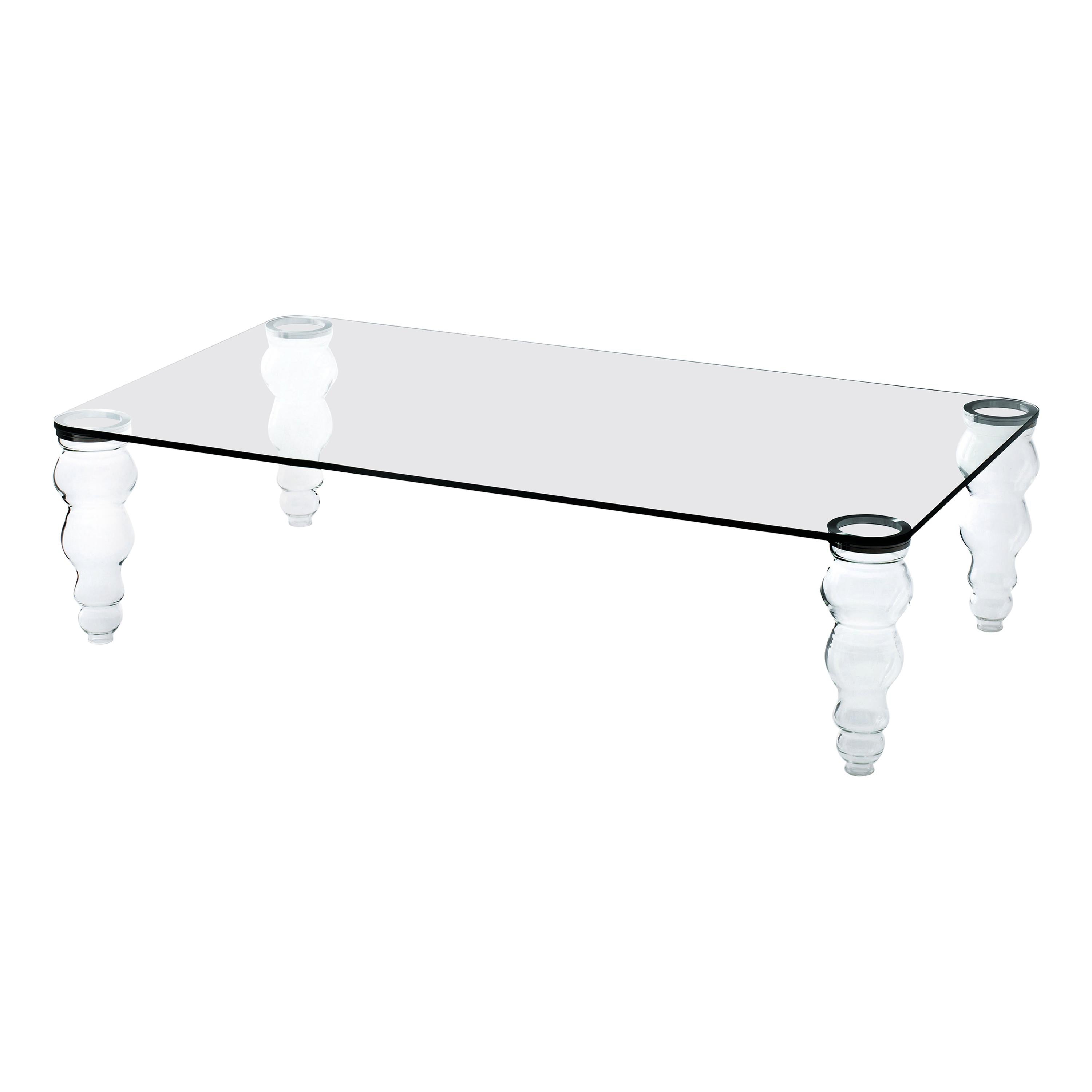 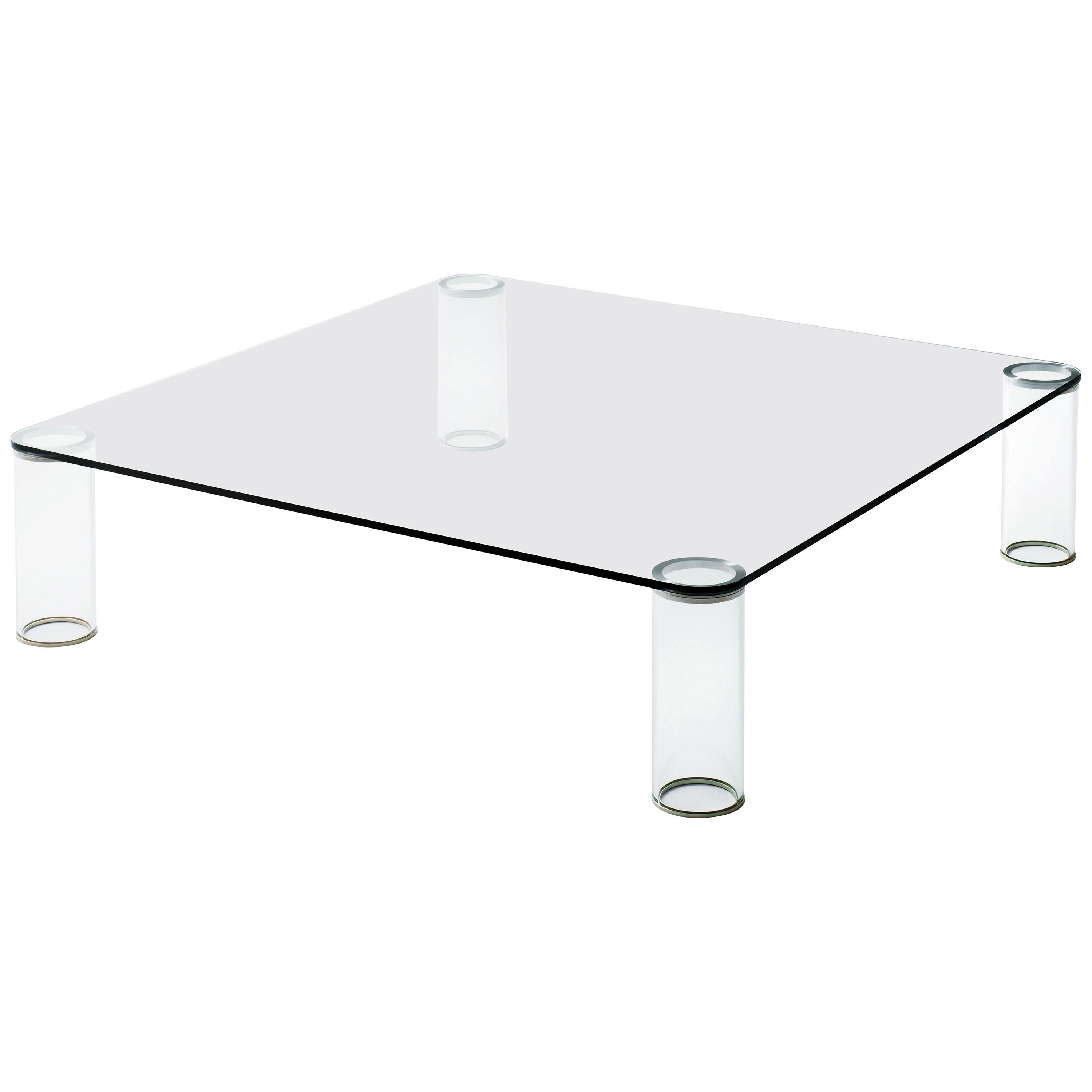 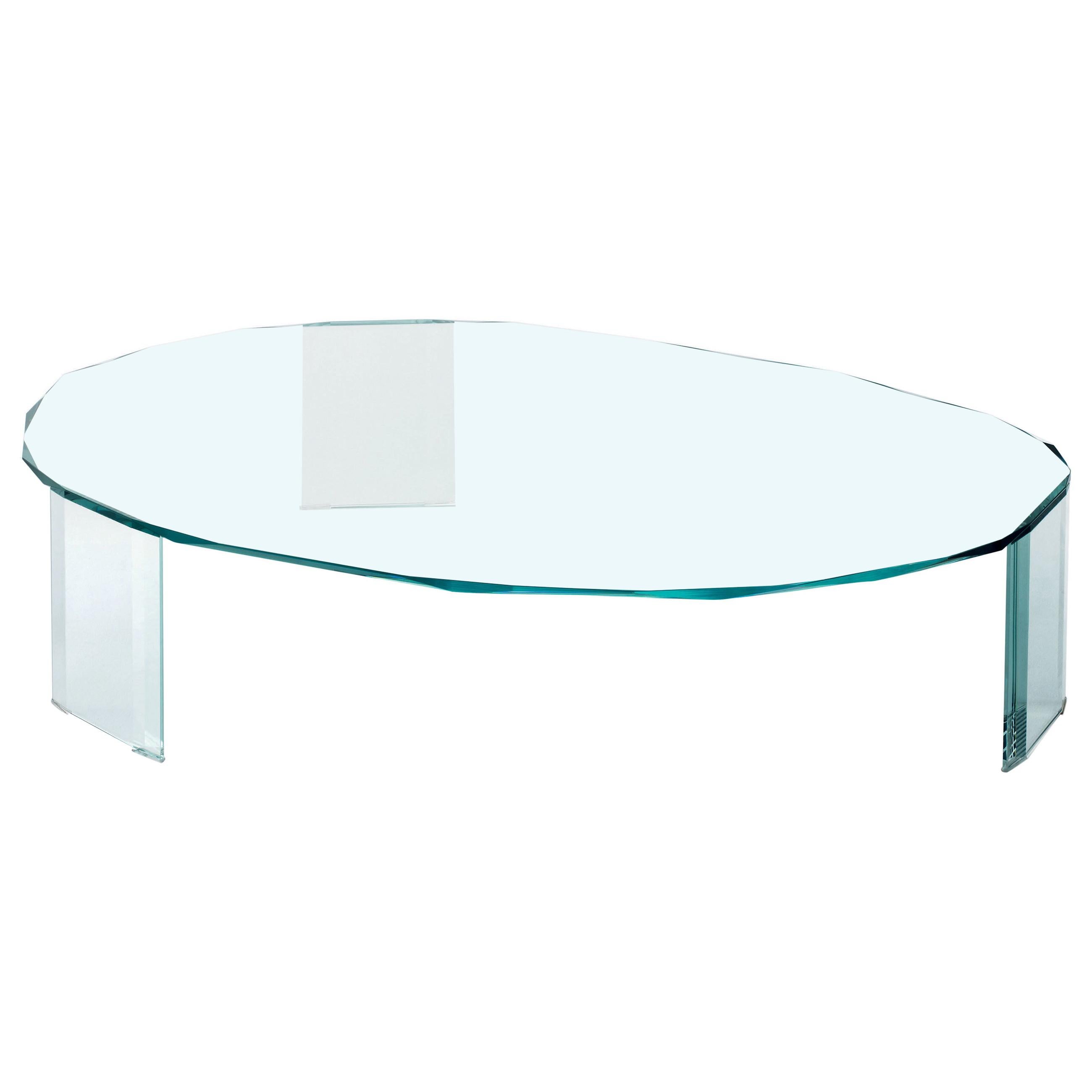 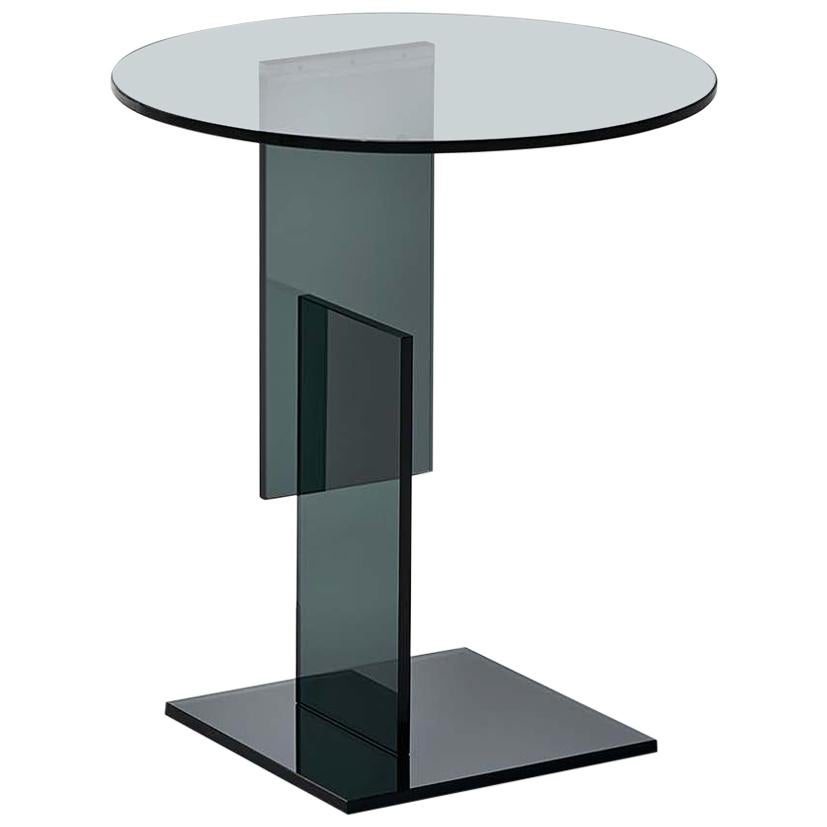 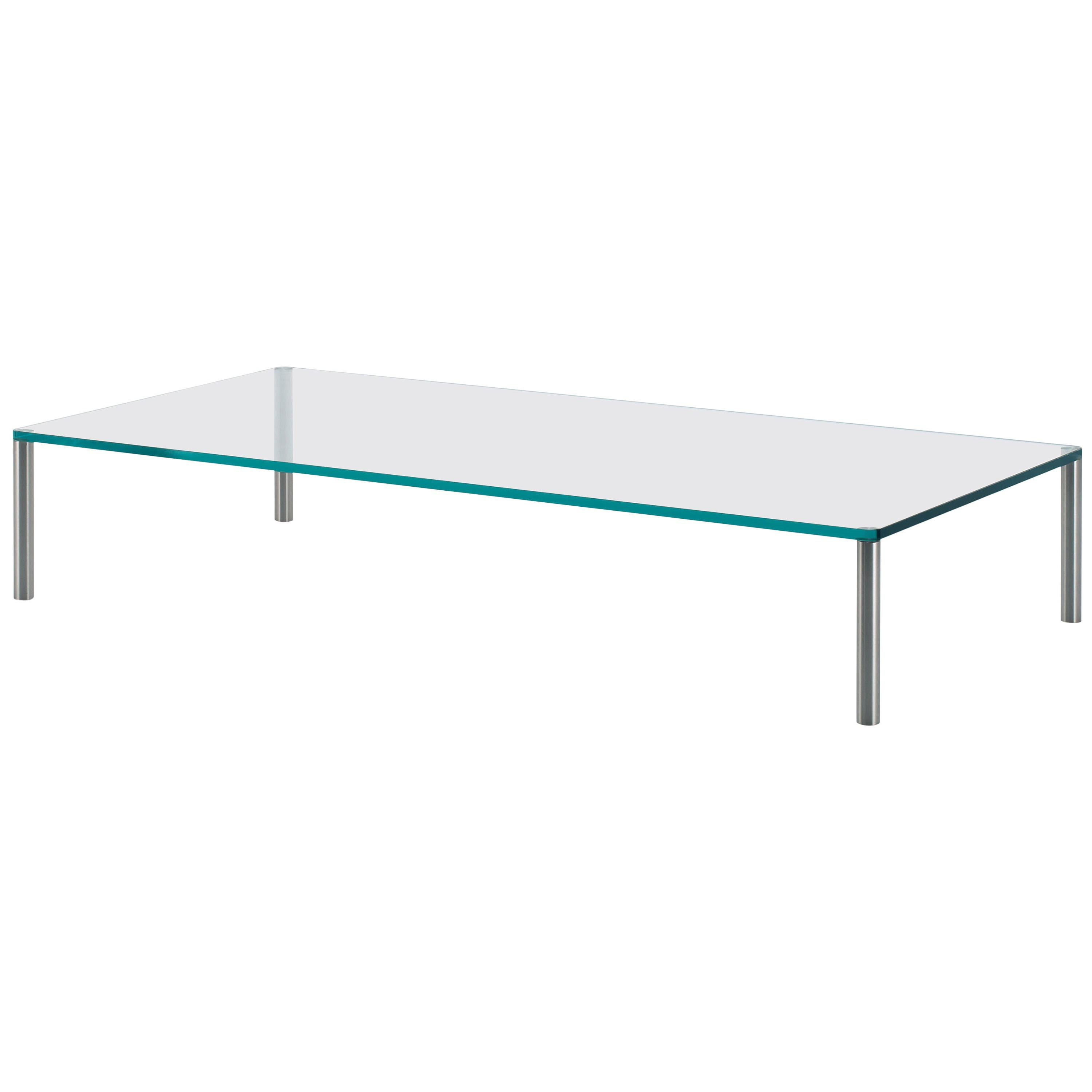 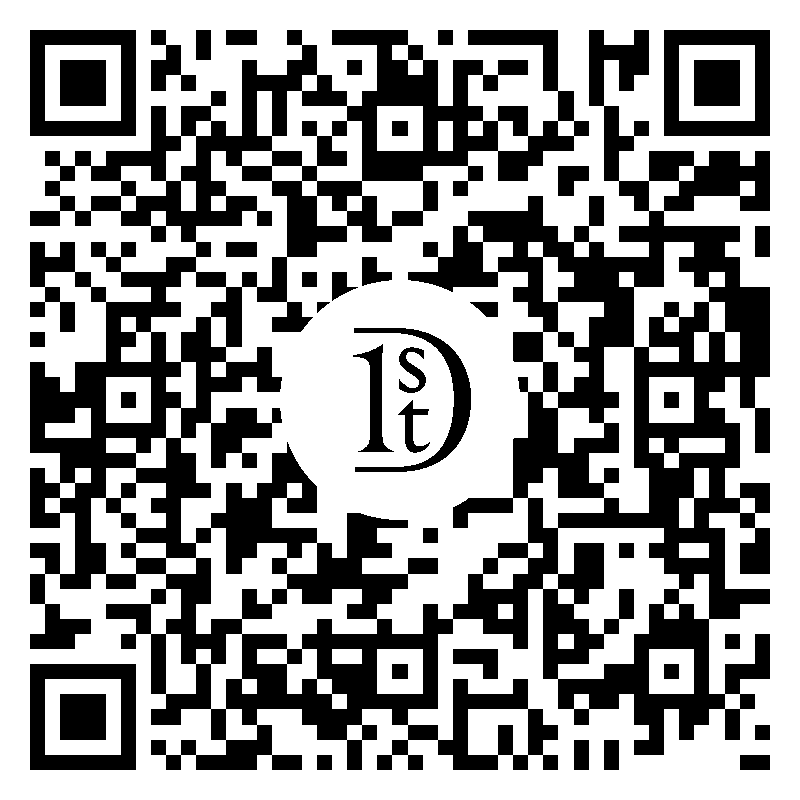 Deep sea low table is shown here in the grey transparent glass shelves, and in the large size. Collection of low tables in laminated and thermo-welded transparent extralight glass. The shelves of the bookcase and the vertical elements of the low tables are in colored transparent glass available in grey or blue tone. Moving from one element to the next, the distance between them gradually decreases, whilst the intensity of color increases. This chromatic effect, associated with the mirror bases, bestows great depth to the pieces and a play of magical reflections. Additional Information: -Dimensions: DEE02 W 125 - D 48 - H 37 -Finishes: Transparent colored glass -Additional size options: Small: DEE01 W 75 - D 75- H 37. Please note that the list price excludes VAT. An additional VAT charge may apply.

Available in one small size 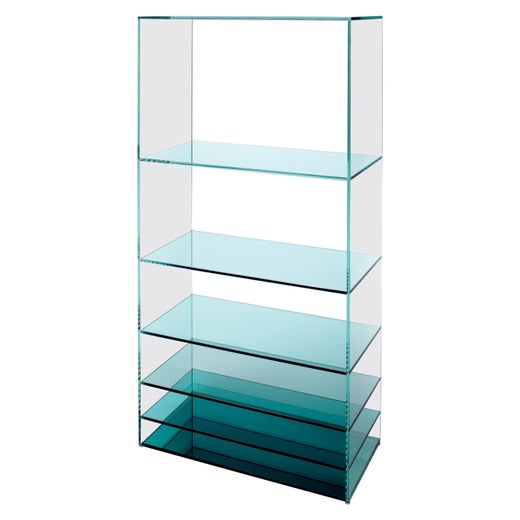 Some pieces of contemporary furniture try to command attention with statement-making forms, while others aim to seduce with pared-down, meticulously detailed perfection. Nendo is remarkable in its ability to blend these two seemingly disparate qualities in objects that are simultaneously provocative and beautiful in their simplicity. And this ability has made the Tokyo- and Milan-based studio one of the most sought-after design firms of the moment.

Nendo is best known for its expansive portfolio of furniture and accessories designed for such luxury makers as Baccarat, Bisazza, Boffi, Cappellini, De Padova, Emeco, FLOS, Foscarini, Fritz Hansen, Kartell, Lasvit, Louis Poulsen, Moroso and Swarovski, as well as for the one-off and limited-edition pieces presented by galleries like New York’s Friedman Benda. But its range is much broader.

Nendo’s full oeuvre runs the gamut from product packaging for such brands as Coca-Cola and Kenzo to large-scale urban-planning and architecture projects, including Tenri Station Plaza CoFuFun, which populated the space in front of a Japanese rail terminal with a series of conical pavilions, turning it into a sort of urban playground for people of all ages.

Whatever the undertaking, the studio’s approach remains the same: embodying lighthearted insights into the human experience in minimalist forms and details. Nendo’s Gaku collection, for the legendary lighting company FLOS, for instance, is based on a simple cup-shaped lamp in a square frame, which can be personalized and changed over time by adding magnetic accessories, including a bookend, mirror, vase and bowl, making it almost as playful as a grown-up dollhouse.

The now iconic Cabbage chair, Nendo’s most recognizable design, offers a whimsical way to deal with trash from the fashion industry. A fat roll of discarded paper used in the production of Issey Miyake’s pleated fabric is simply cut down the middle and its individual layers peeled open to create a seat.

It wasn’t always evident that chief designer and Nendo cofounder Oki Sato would spend his life finding subtle surprises in tables, floor lamps and chairs. He was born in Toronto, where his father worked for Pioneer Electronics, and moved with his family to Tokyo when he was 11. He studied architecture at Waseda University but found the program a little too narrow and rigid for his liking.

After graduating, in 2002, he traveled with friends to the Salone del Mobile in Milan and stumbled into the biggest aha moment of his life: He realized that architects could do more than design buildings — they could also design furniture, lighting and other objects. And the architects at the fair appeared to be enjoying plenty of creative freedom while doing so.

Upon returning to Tokyo, he founded Nendo, whose name means “flexible clay” in Japanese, with his classmate Akihiro Ito, the firm’s managing director. In 2005, they established a second office, in Milan. Within a few years, Nendo had become an omnipresent name at the fair that had inspired them.

Founded in Brianza in the early 1970s, Glas Italia produces glass furniture, wall-partitions, doors and accessories, all of which draw from its hundred-year-long experience and technical expertise as a family business, as well as a deep passion for the manufacture of glass. Glas Italia uses the most advanced, cutting-edge technology in the study and design of glass materials in order to meet the real and constant increase of complex manufacturing. Glas Italia collaborates with the top international designers, whose creative talent lies behind each of their products. Their sheer degree of refinement and originality of proposals, represents the core values and instant recognizable features of Glas Italia’s products. All of which can be used with equal effect, within a home, office, and in contract markets. 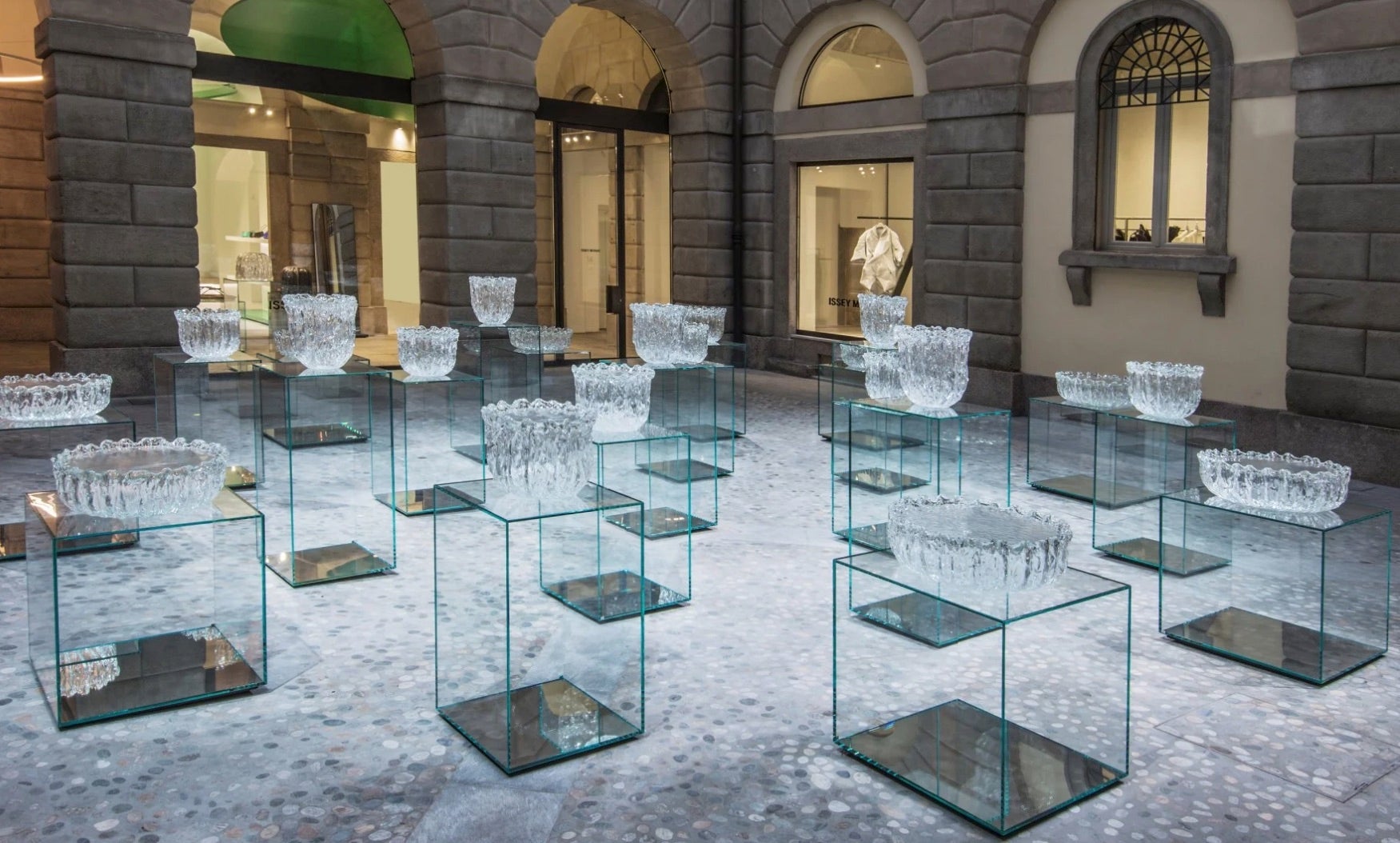 1stDibs Buyer Protection Guaranteed
If your item arrives not as described, we’ll work with you and the seller to make it right. Learn More
About the Seller
5.0
Located in Macherio, Italy
Vetted Seller
These experienced sellers undergo a comprehensive evaluation by our team of in-house experts.
1stDibs seller since 2019
154 sales on 1stDibs
Typical response time: 1 hour
More From This SellerView All
People Also Browsed
You May Also Like
Featured in The New IconsView All 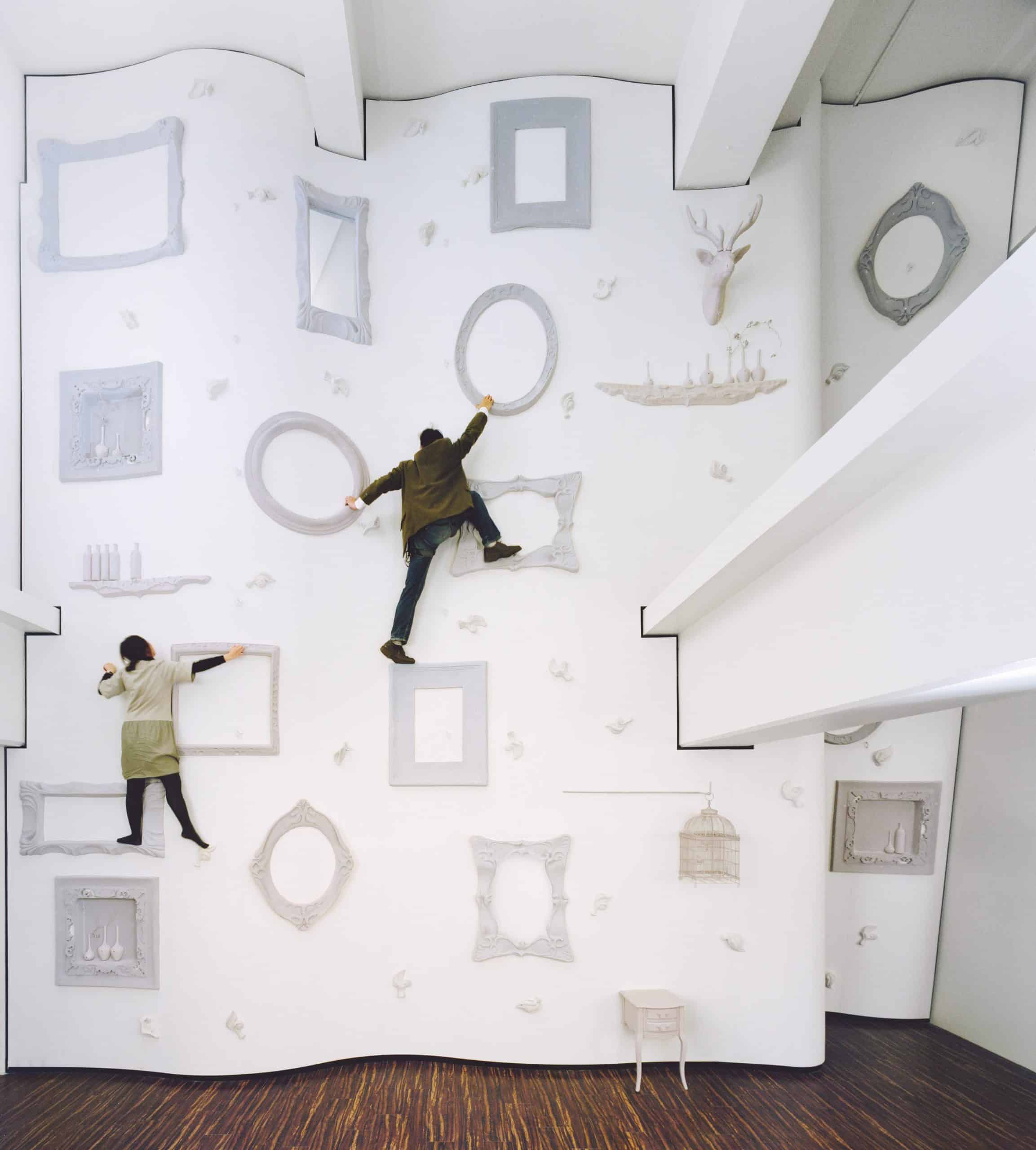 Nendo Susses Out the Silly Side of Minimalist Decor