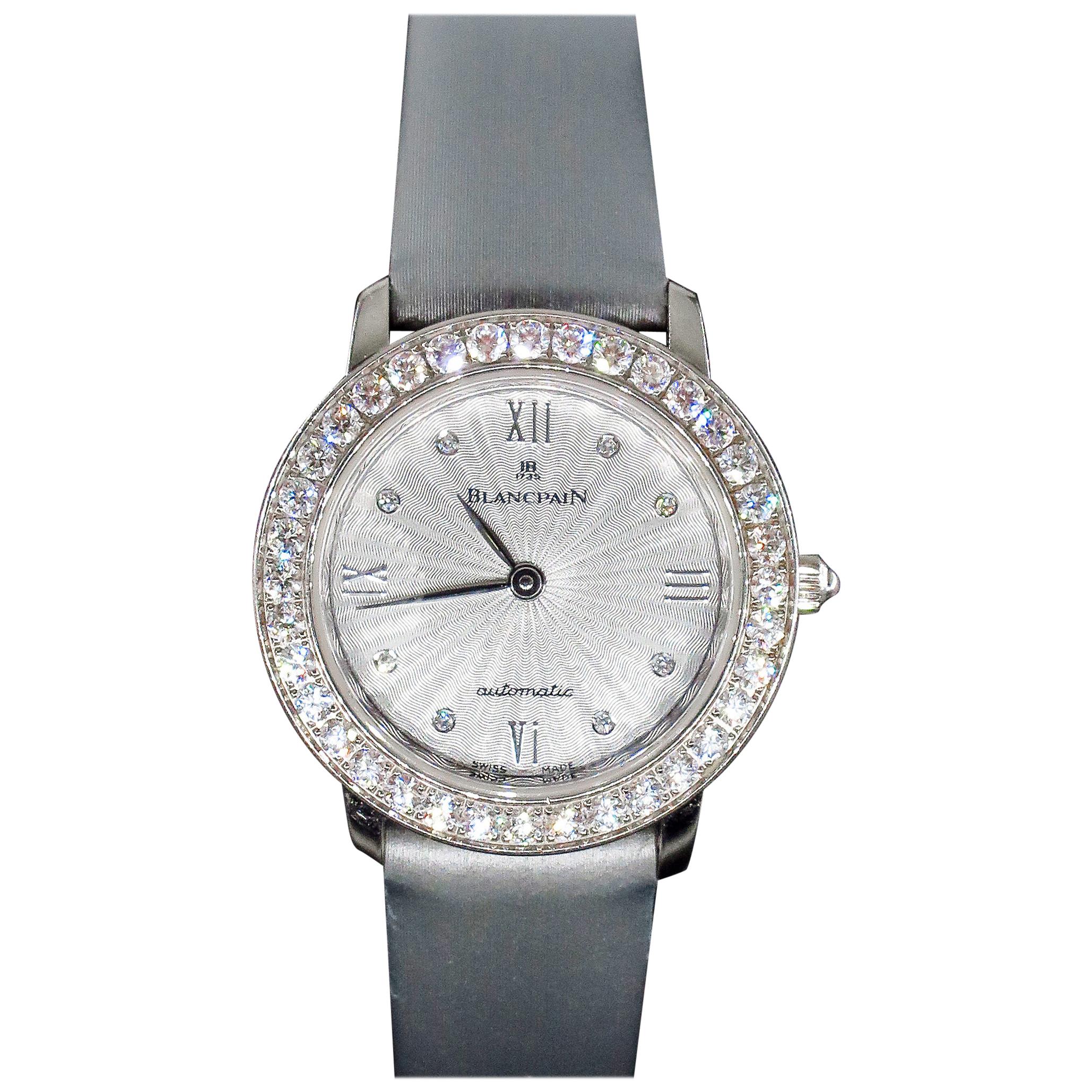 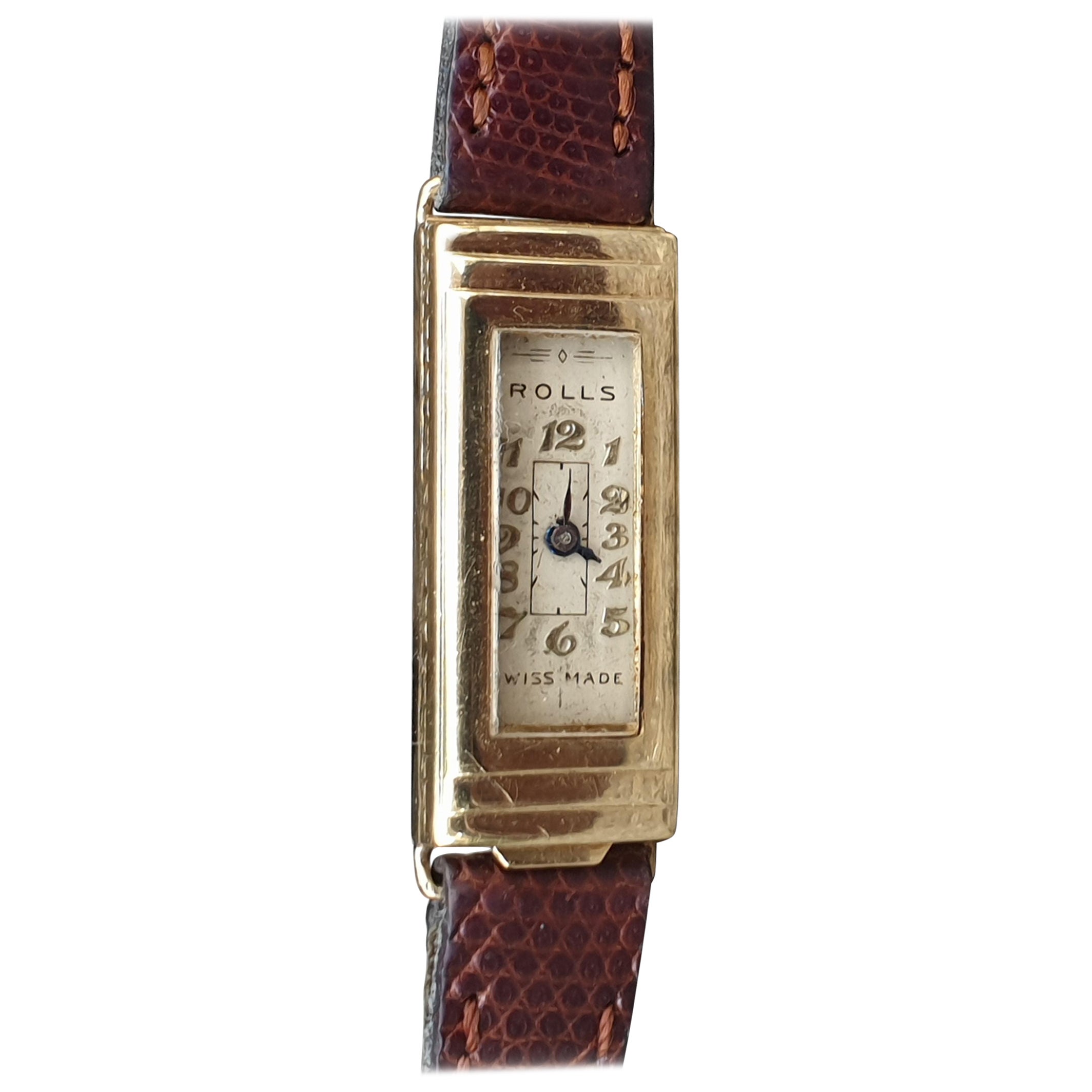 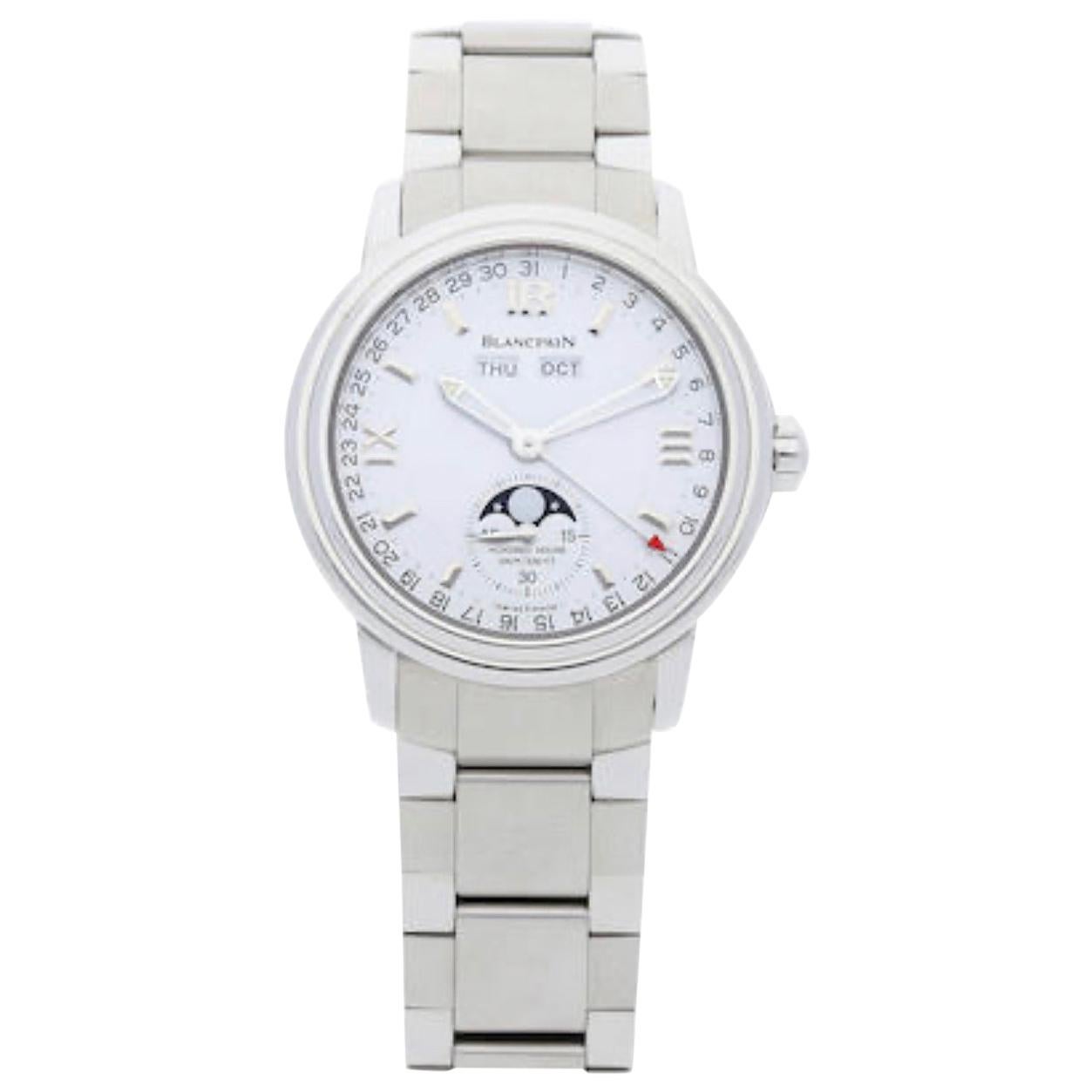 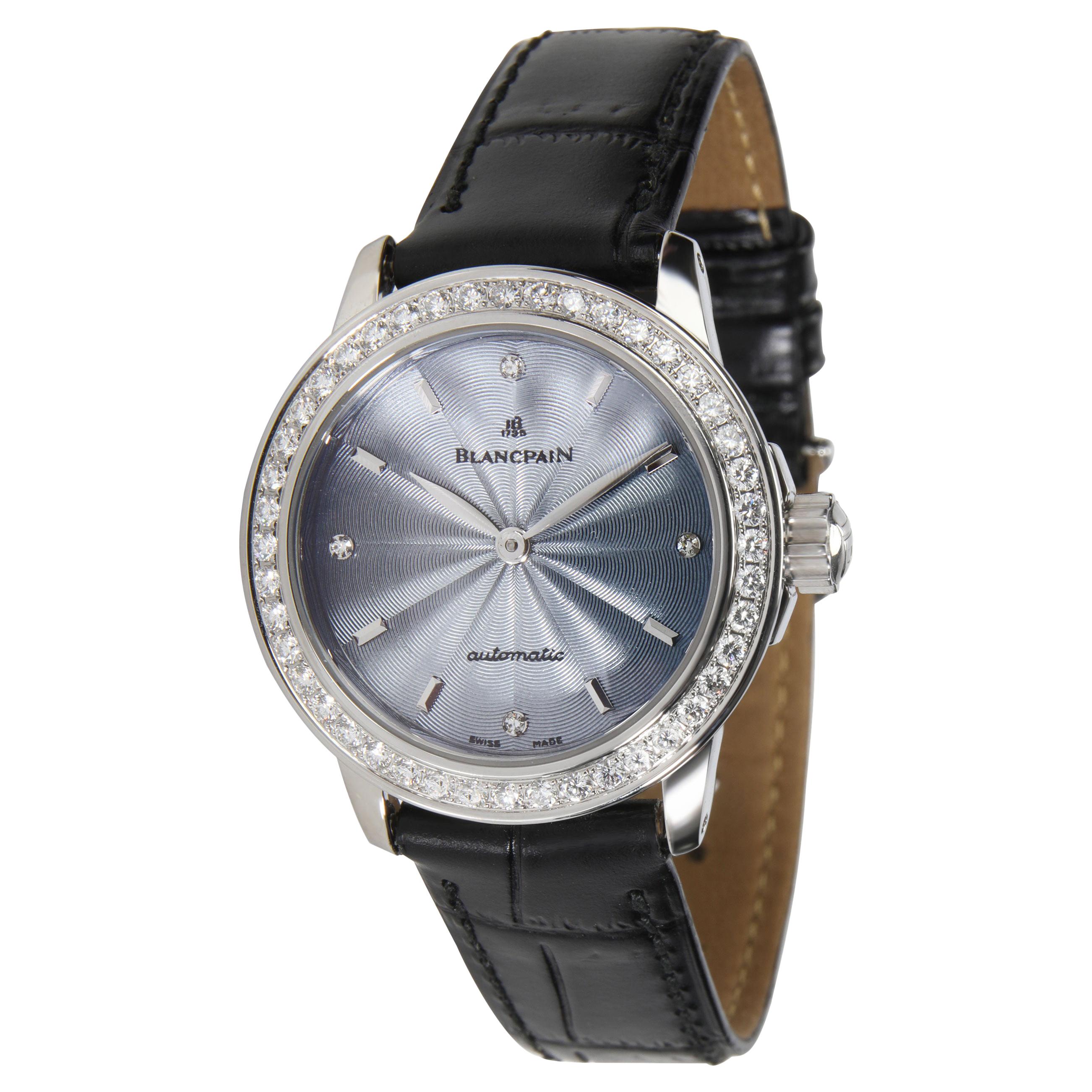 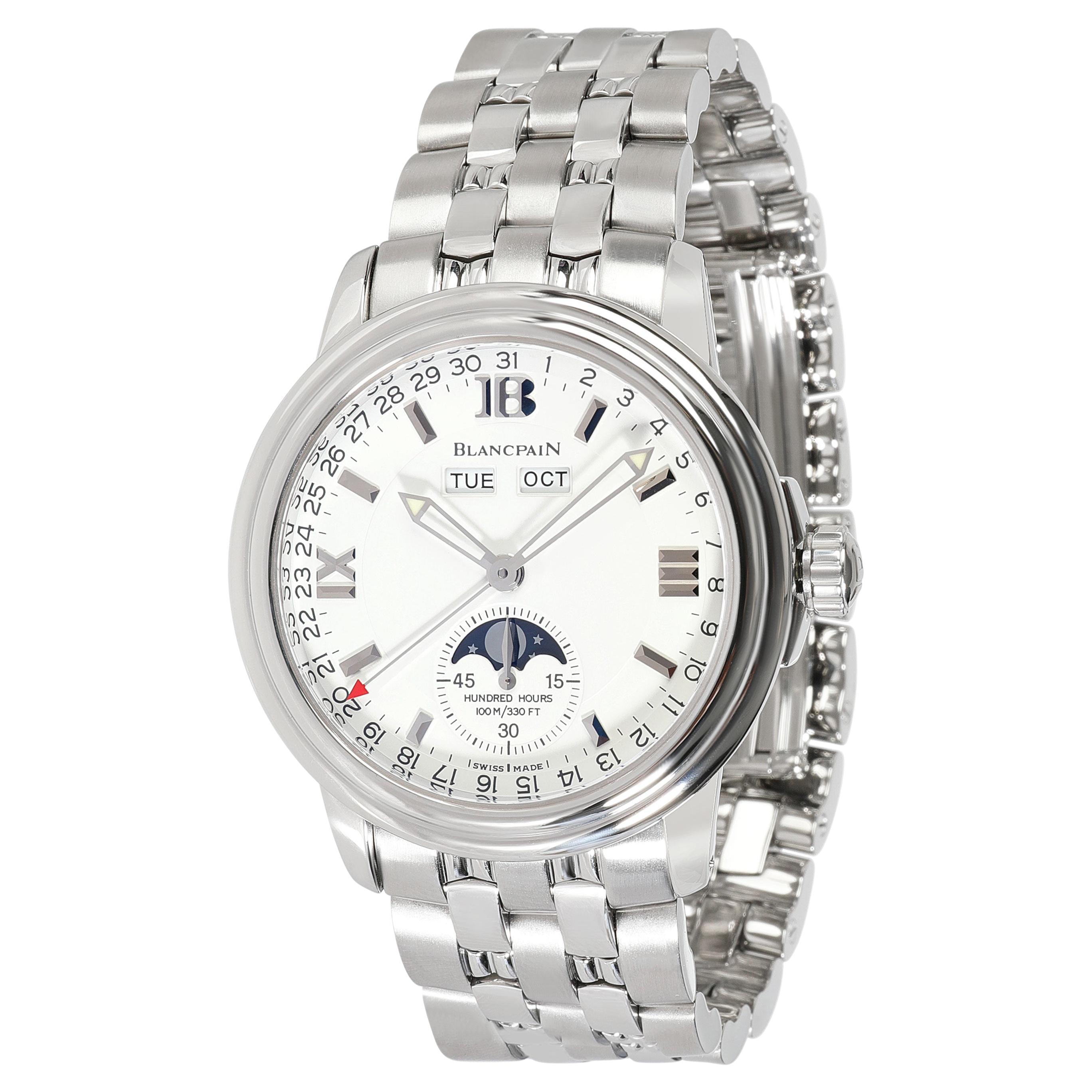 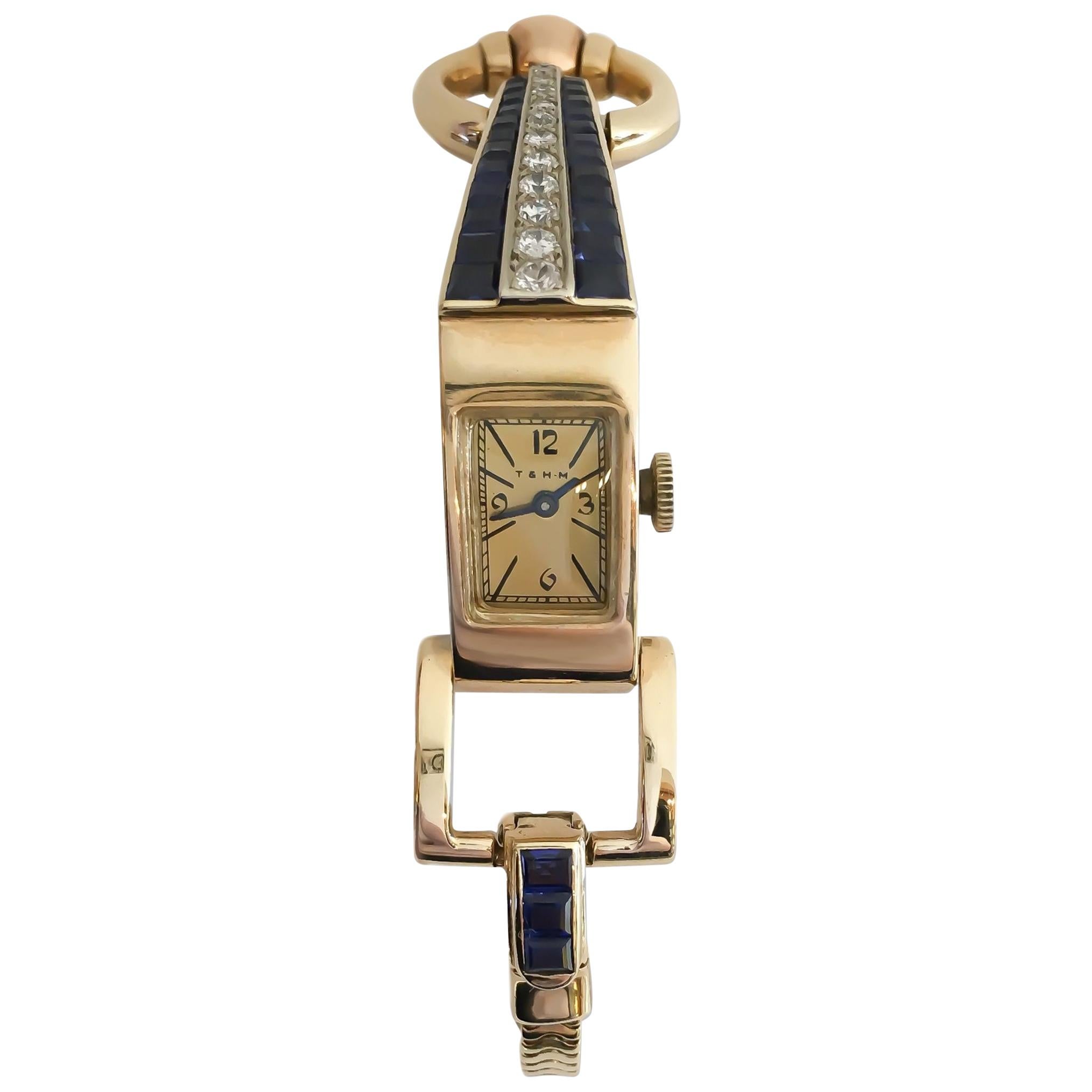 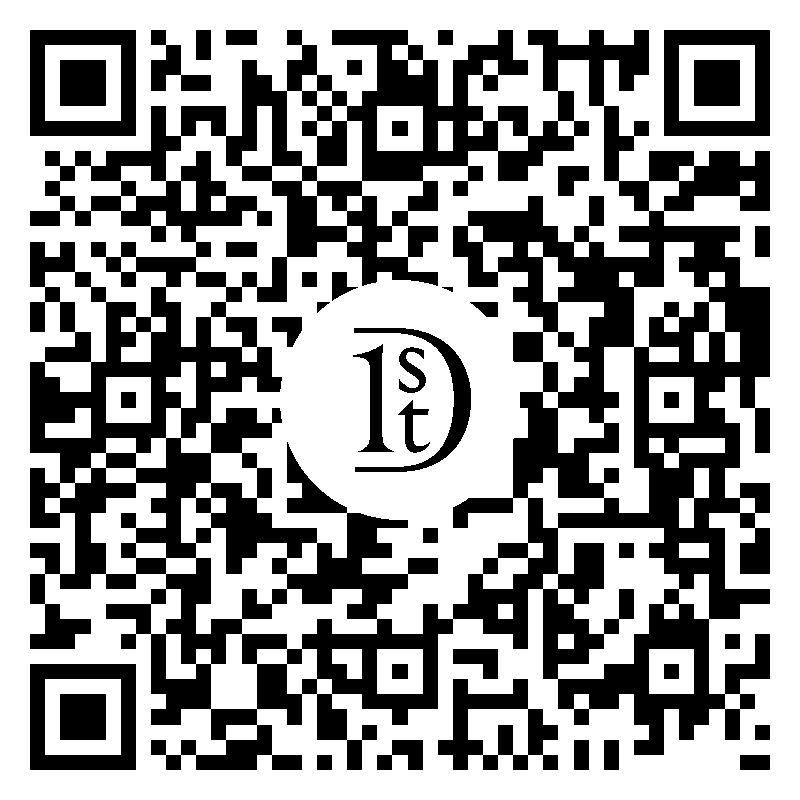 Blancpain Heure Decentree Ladies Watch Model: 3650A 4528 55B No. 256 This authentic Blancpain watch has a stainless steel case with a white diamond dial. Case is 36.8 mm in diameter and 10.3 mm thick Retrograde seconds Automatic Movement Skeleton Back NEW Blancpain White Crocodile Band and stainless blancpain deployment clasp Just authenticated and serviced by our certified watchmaker. Excellent pre owned running condition. Original box and paperwork are NOT available. Will come shipped fed ex with insurance and signature required and in a gift box. This watch retails for $18,100 12390019AD 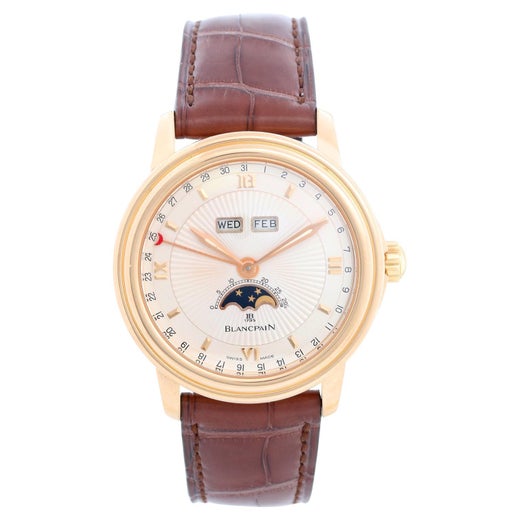 In 1735, Jehan-Jacques Blancpain opened a modest workshop on the second floor of his farmhouse in the Jura village of Villeret in Switzerland. These humble beginnings would form the foundation of what is now the world’s oldest existing watchmaker and one of the premier brands within the category of Swiss watchmaking.

Like most horologists at the time, Blancpain’s business was, at the beginning, a family affair: Jehan-Jacques’s son and siblings joined in the work at hand. After all, between the honing, polishing, design and assembly, the making of an innovative watch calls for all hands on deck. Since then, even given its deep history, Blancpain has remained a forward-looking brand.

At the end of the 18th century, Jehan-Jacques’s grandson David-Louis endeavored to turn the family business into an international one, traveling to cities across Europe to proffer the family’s distinctive timepieces, which were known for their roue de rencontre, or meeting wheel, escapements. By the early 1800s, Frédéric-Louis Blancpain, Jehan-Jacques’s great-grandson, had begun work on ultra-flat movements and implemented modern means of production at the factory. Soon, Blancpain built a two-story factory that further bolstered its production capacity.

In 1926, Blancpain partnered with British watchmaker John Harwood to produce the first automatic wristwatch, an innovation that had existed only in pocket watches at that point. Then nearly 30 years later, when the race to craft modern dive watches had gained speed and Rolex was unveiling its iconic Submariner, Blancpain introduced its Fifty Fathoms, a timepiece designed initially for the French Navy to be waterproof up to a depth of 50 fathoms.

After two centuries of family management, Blancpain left the hands of its namesake family in 1932, passing between a few owners before being acquired in 1961 by SSIH, the venerable Société Suisse pour l’Industrie Horlogère, whose other subsidiaries include Omega and Tissot. SSIH would sell Blancpain to a member of another Swiss watch family, Jacques Piguet, in the early 1980s. In 2010, Piguet merged with Blancpain under the Swatch Group. Today, Blancpain maintains its painstaking attention to detail, producing fewer than 30 watches per day, each crafted by a single watchmaker.

Find a wide range of vintage Blancpain watches for sale on 1stDibs today.

1stDibs Buyer Protection Guaranteed
If your item arrives not as described, we’ll work with you and the seller to make it right. Learn More
About the Seller
4.9
Located in Washington Depot, CT
Platinum Seller
These expertly vetted sellers are 1stDibs' most experienced sellers and are rated highest by our customers.
Established in 2008
1stDibs seller since 2018
1,959 sales on 1stDibs
Typical response time: 1 hour
More From This SellerView All
People Also Browsed
You May Also Like