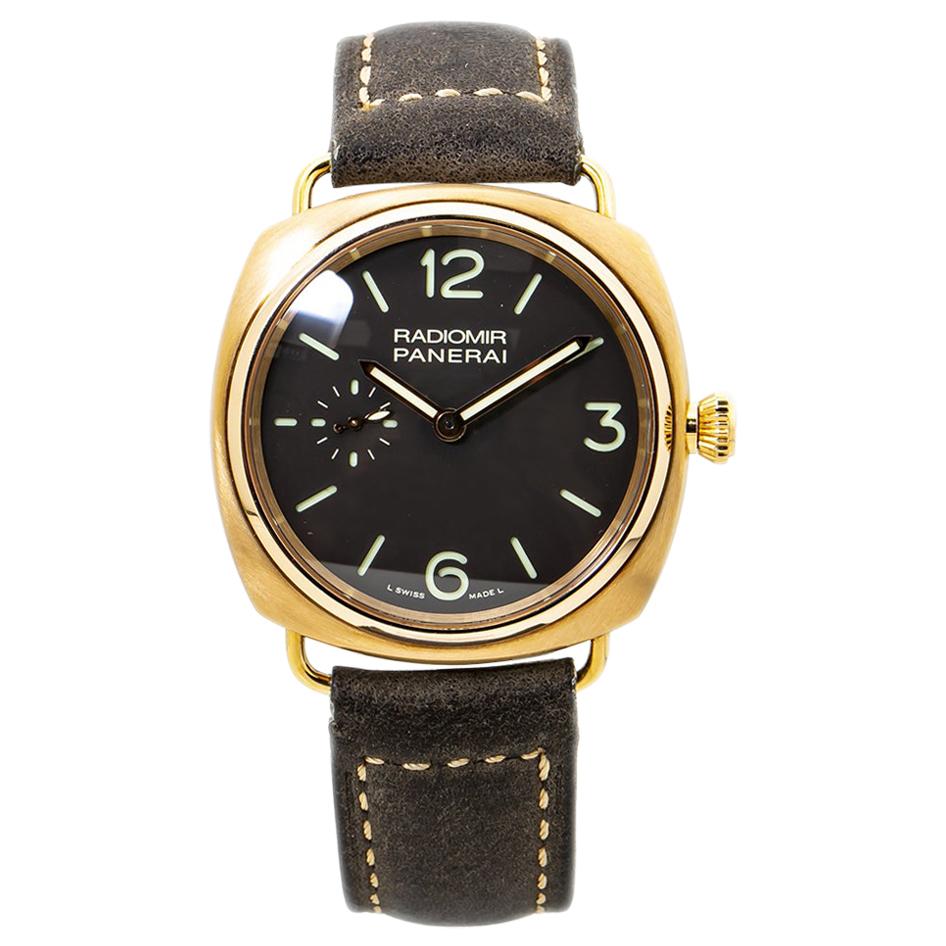 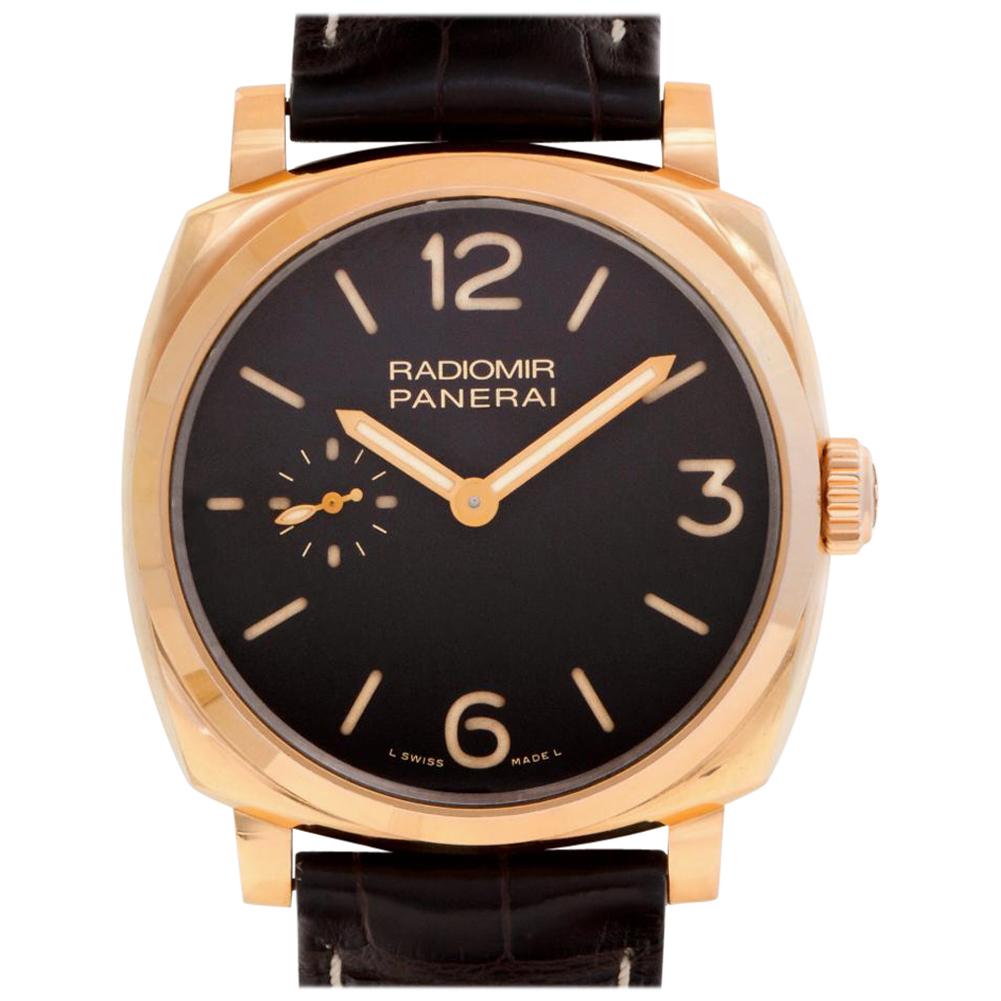 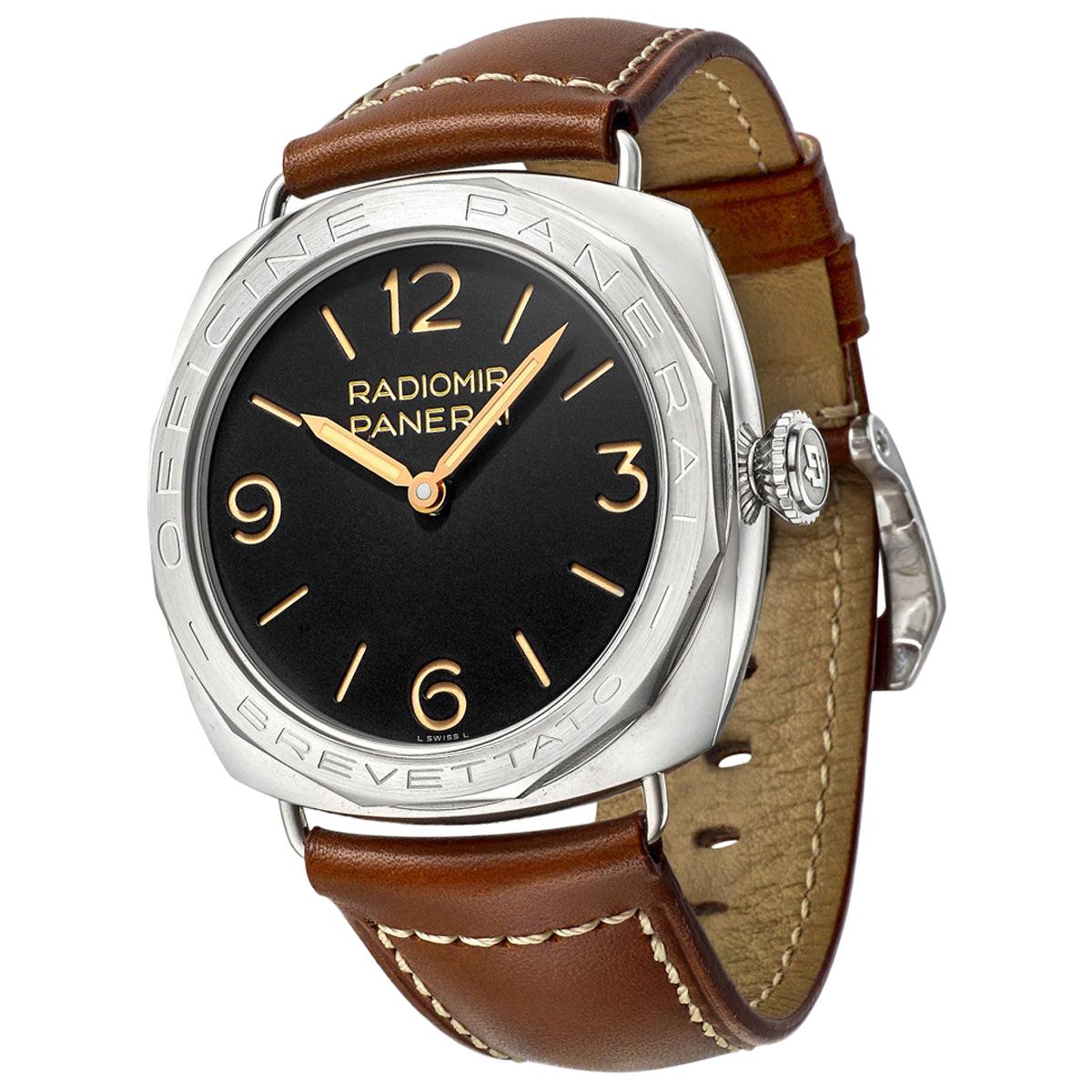 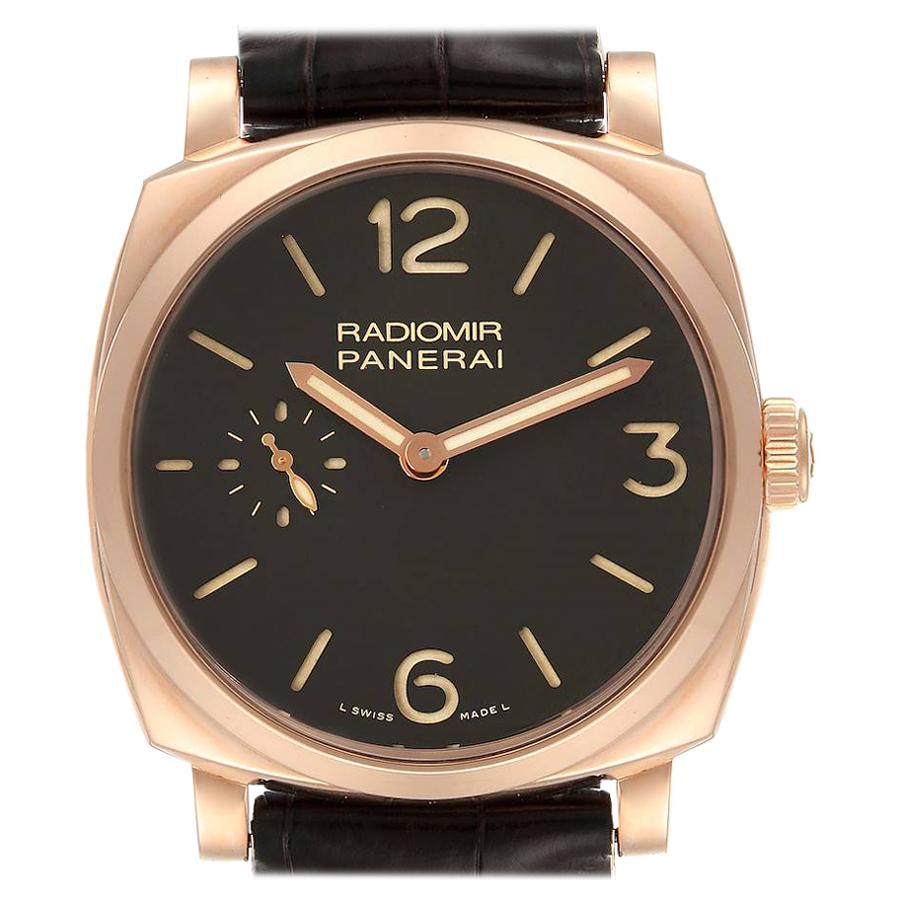 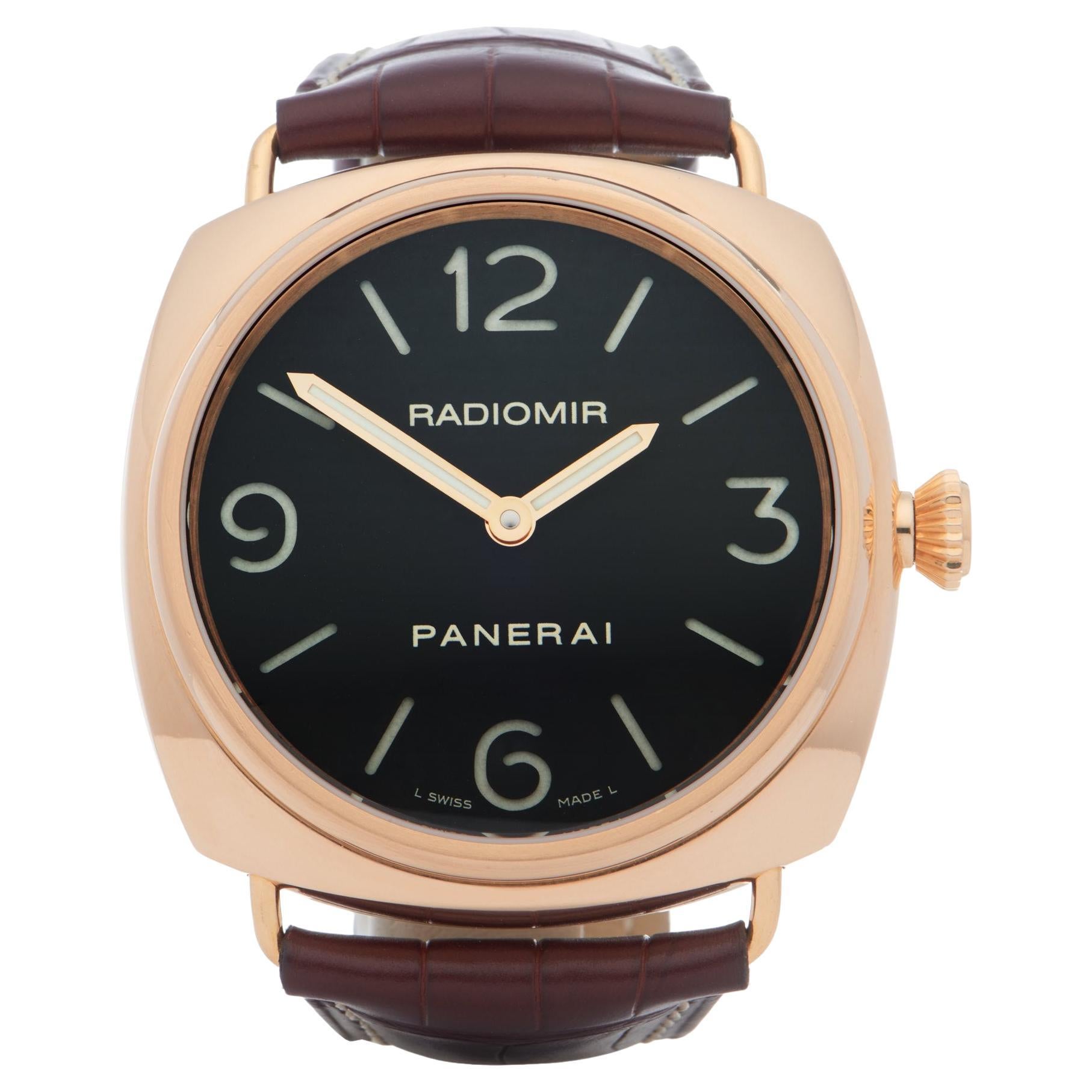 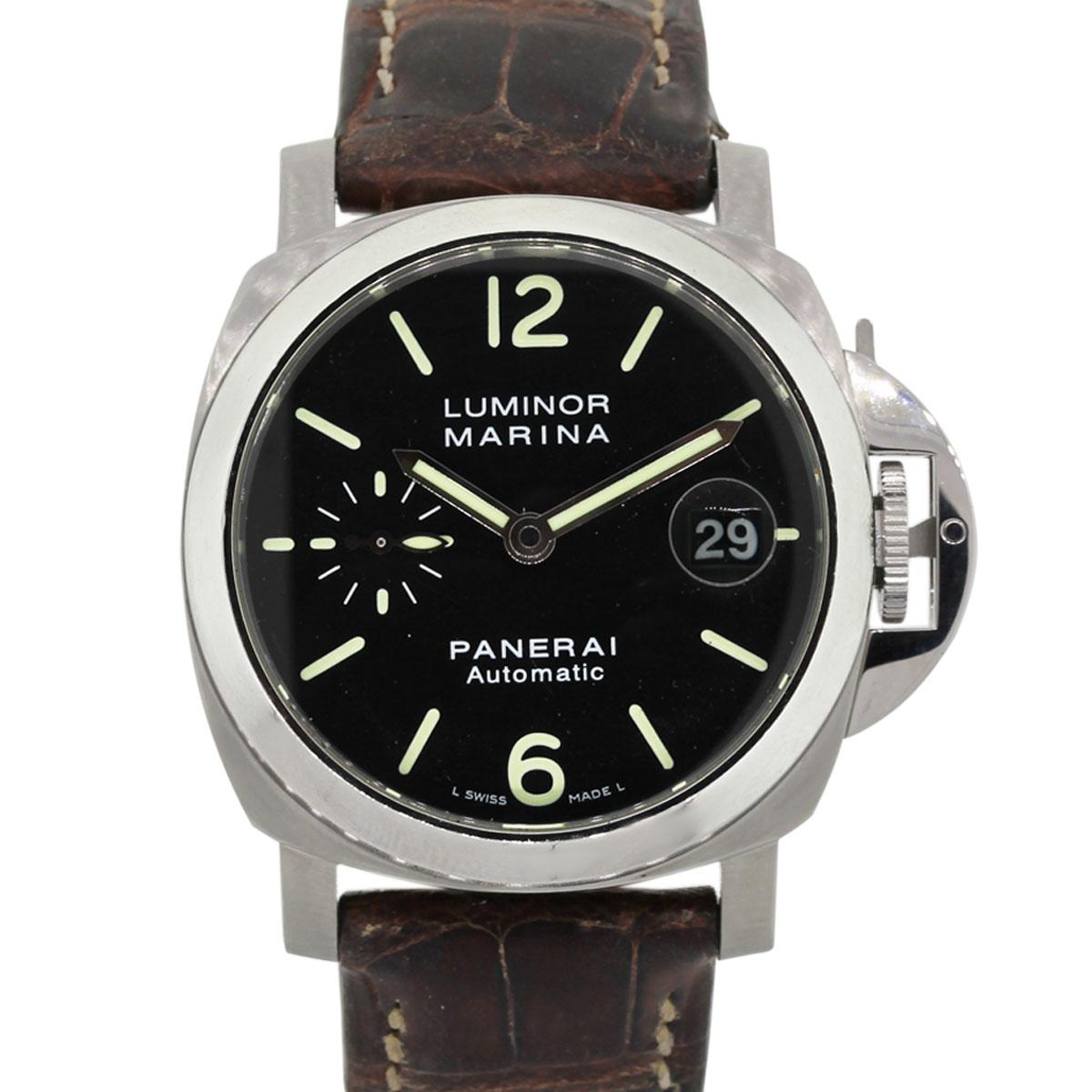 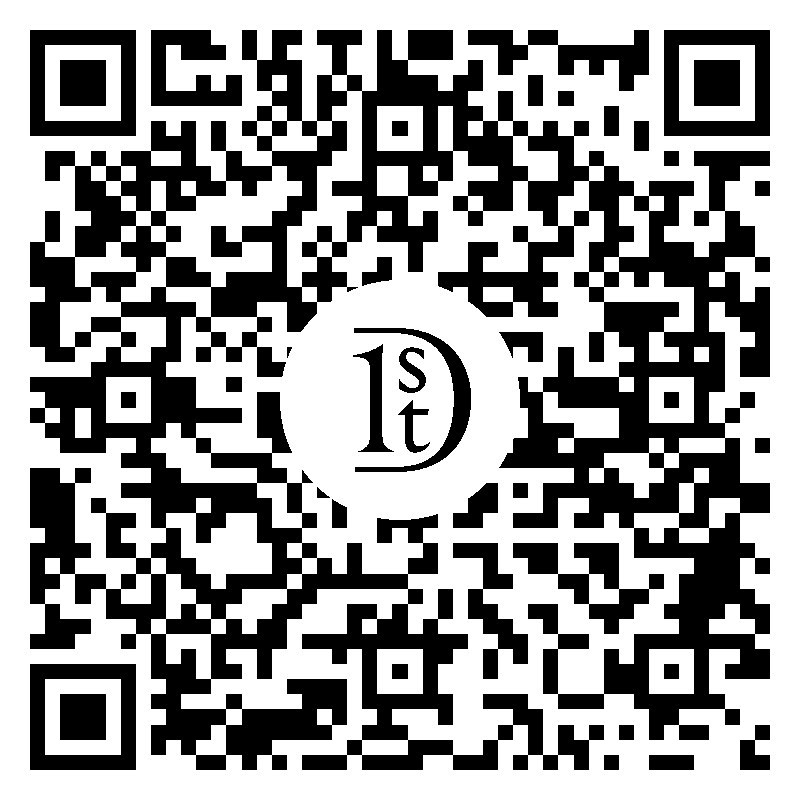 This watch an Officine Panerai Radiomir Firenze 1860 Watch with the 42mm case and bezel made of 18k rose gold. Brown dial with luminous baton hour markers with seconds marker at the 9 o'clock area. Luminous arabic numerals for 3, 6, and 12 o'clock markers. It has an exhibition case-back set with sapphire crystal. Hand-wound mechanical system. Original Panerai dark brown alligator strap. Comes with original Panerai Box and documents. A limited edition piece of 500. 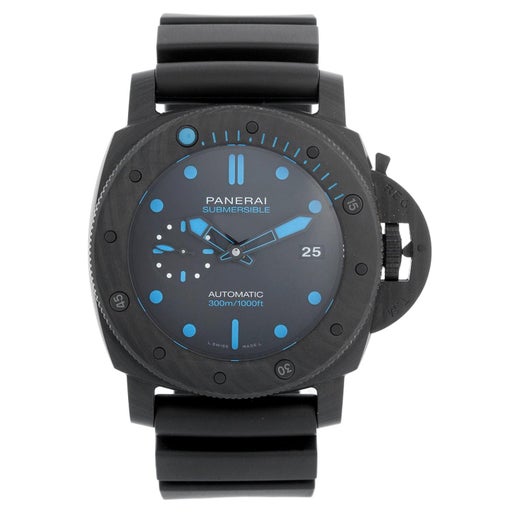 The luxury Italian watchmaker Panerai began as a humble watch retail and repair facility opened by Giovanni Panerai (1825–97) in Florence in 1860. By the early 20th century, it had established itself as a major supplier of seaworthy timepieces for the Royal Italian Navy. Radiomir, which references the radium that was used on luminous watch dials, was the foundation of the brand’s technically brilliant and visually distinctive watchmaking, patented by Panerai in 1916.In 1936, the first Radiomir watch powered by Rolex movements was presented to the Royal Italian Navy’s First Submarine Group Command; this design would go on to become one of the brand’s most iconic models with its luminescent numbers and large cushion-shaped steel case (Panerai’s name, which is well-known to contemporary watch collectors, is now essentially synonymous with behemoths up to 50mm). Since then, the brand has introduced numerous models inspired by the ocean and to meet the utility needs of the Navy. The Mare Nostrum model, which debuted in 1943, was a two-counter chronograph designed for deck officers. The self-illuminating material Luminor was patented in 1949 and replaced the radium-backed Radiomir, with the 1950 Luminor watch model featuring a crown-protecting bridge, now one of Panerai’s most distinctive design details.In 1993, Panerai introduced its watches to the wider public with three series — the Luminor, the Luminor Marina and the Mare Nostrum — reimagining its historical models. The company continues to innovate, celebrating its 70th anniversary with a water-resistant diving watch with a luminescent dial inspired by French free-diver Guillaume Néry.Today, Panerai is on the cutting-edge of watch sustainability, with the Panerai Ecologico initiative including the almost entirely recycled Submersible eLAB-ID watch and a series of Luminor Marina models composed of a recycled-based steel alloy. Panerai manufactures its high-end, hand-wound watch calibers in a Swiss facility that opened in 2002, combining Swiss technology with its core elements of Italian design and a long, storied connection to the sea.Find Panerai watches on 1stDibs. 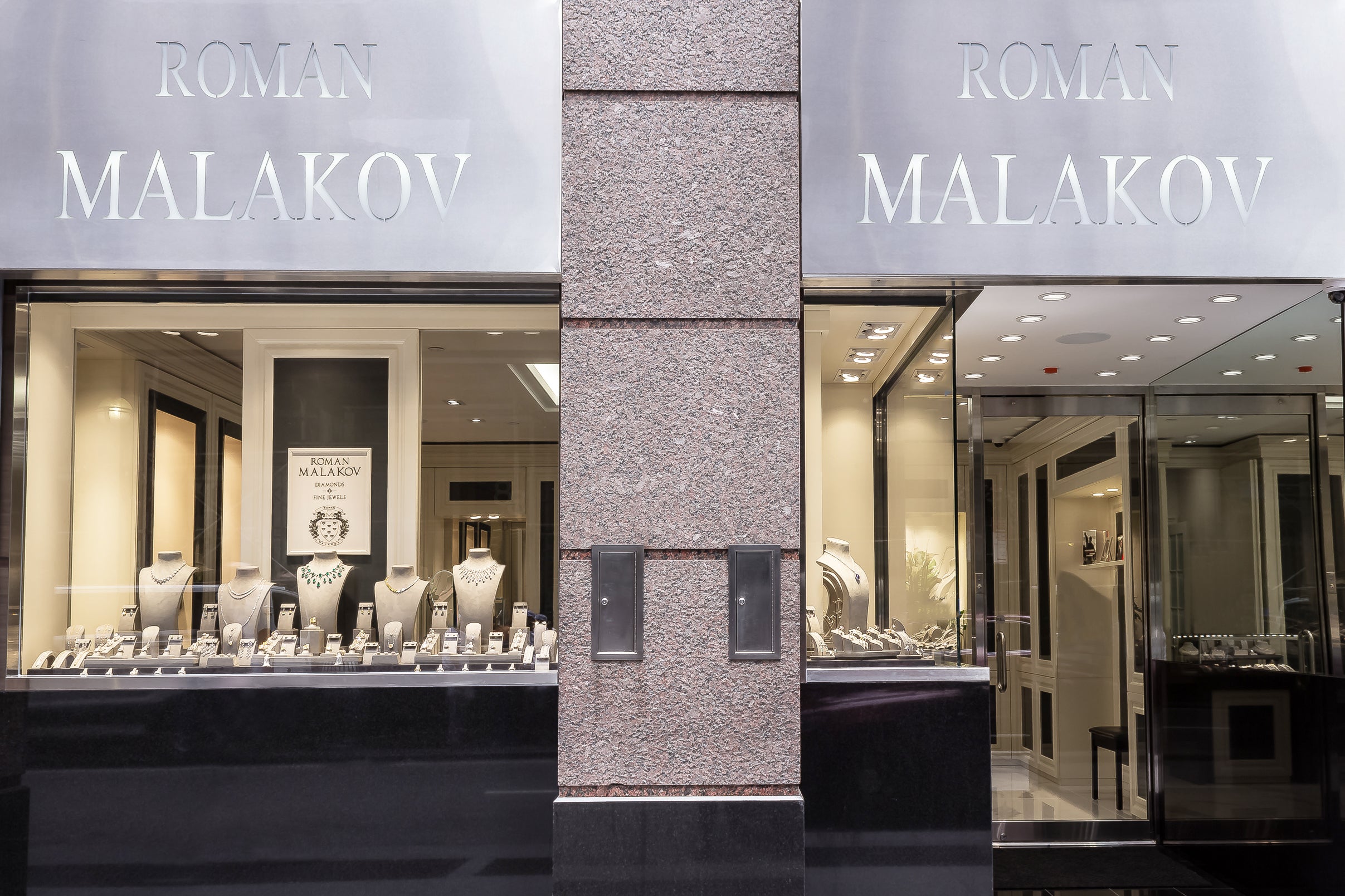 Recognized Seller
These prestigious sellers are industry leaders and represent the highest echelon for item quality and design.
Diamond Seller
These expertly vetted sellers are 1stDibs' most experienced sellers and are rated highest by our customers.
Established in 1959
1stDibs seller since 2017
205 sales on 1stDibs
Typical response time: 2 hours
More From This Seller