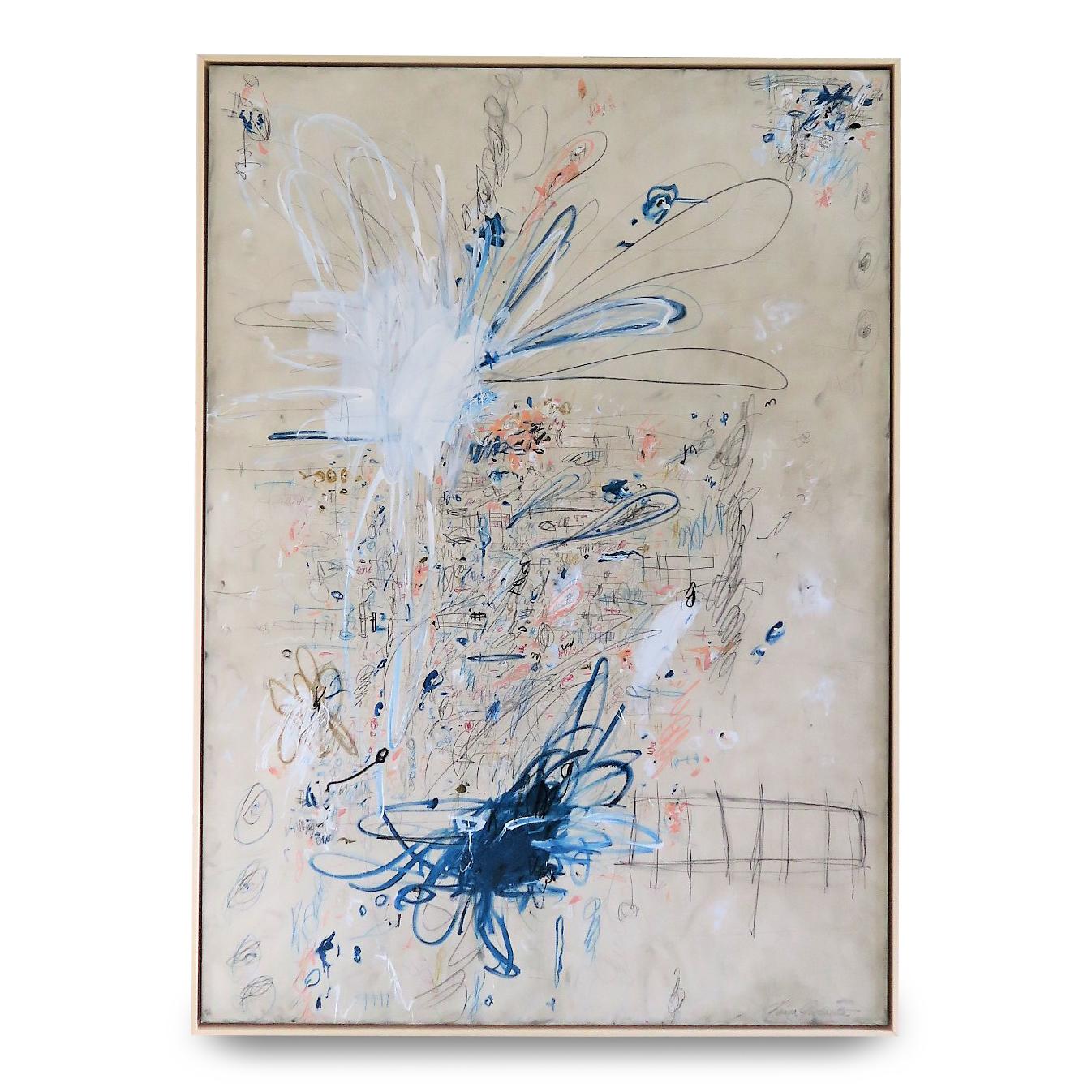 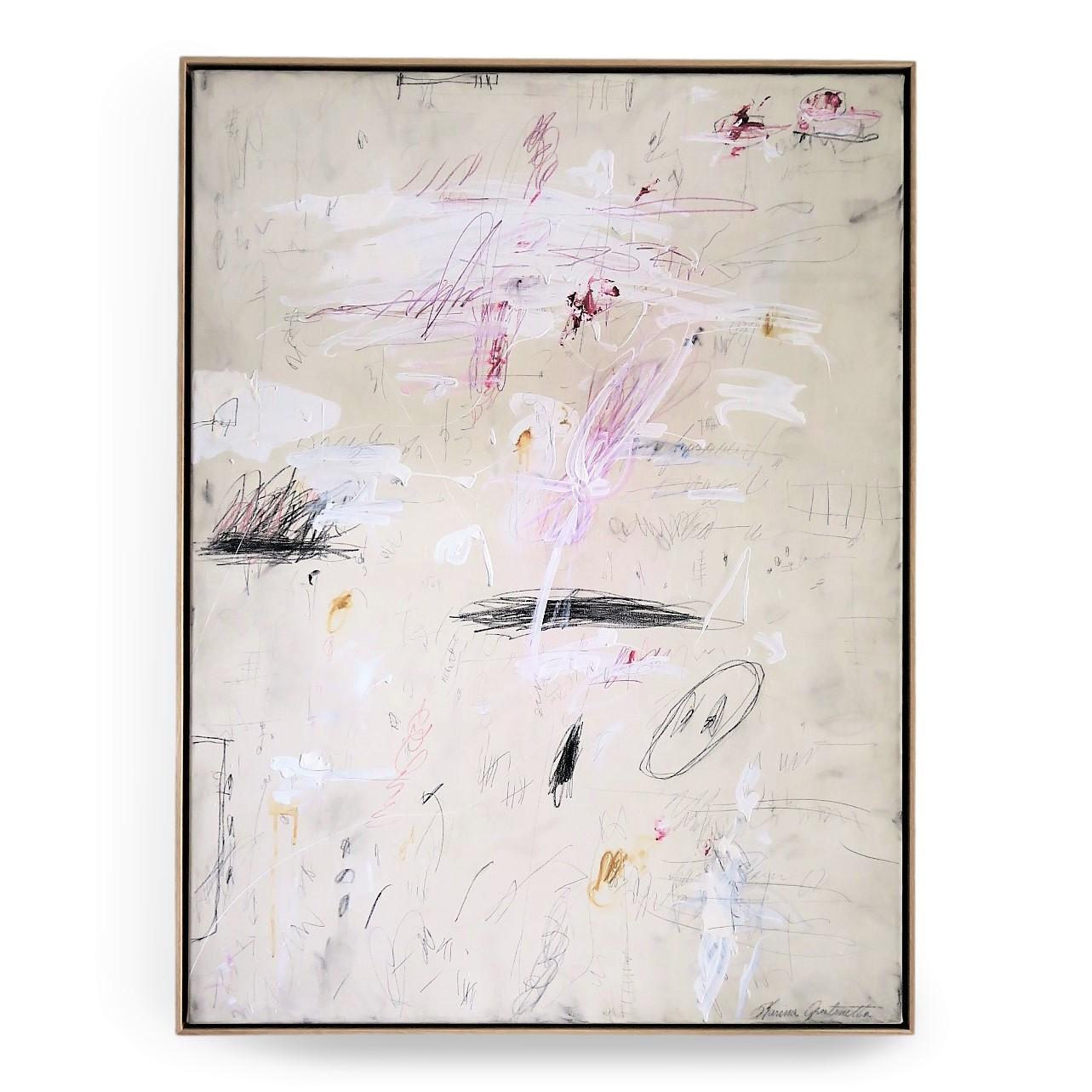 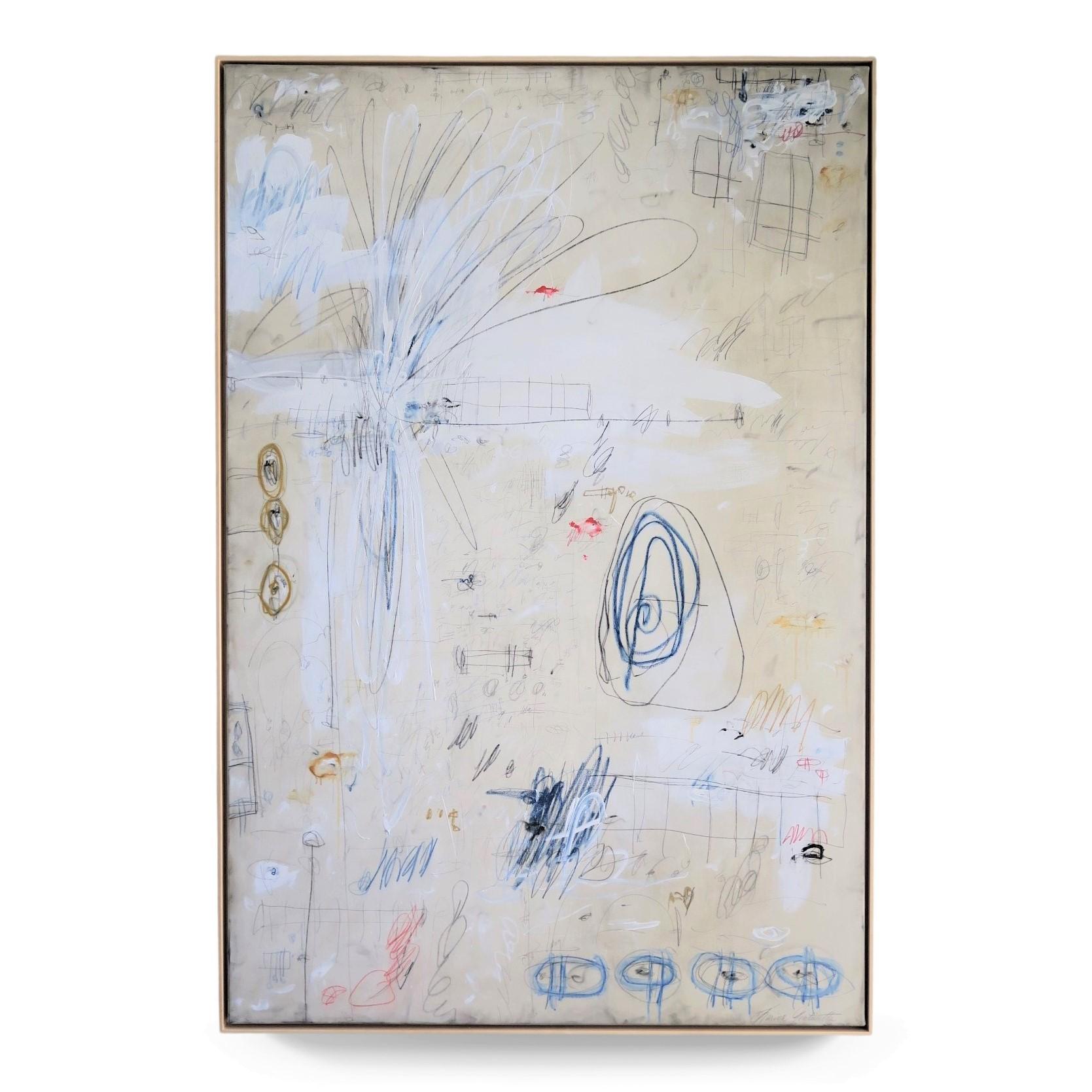 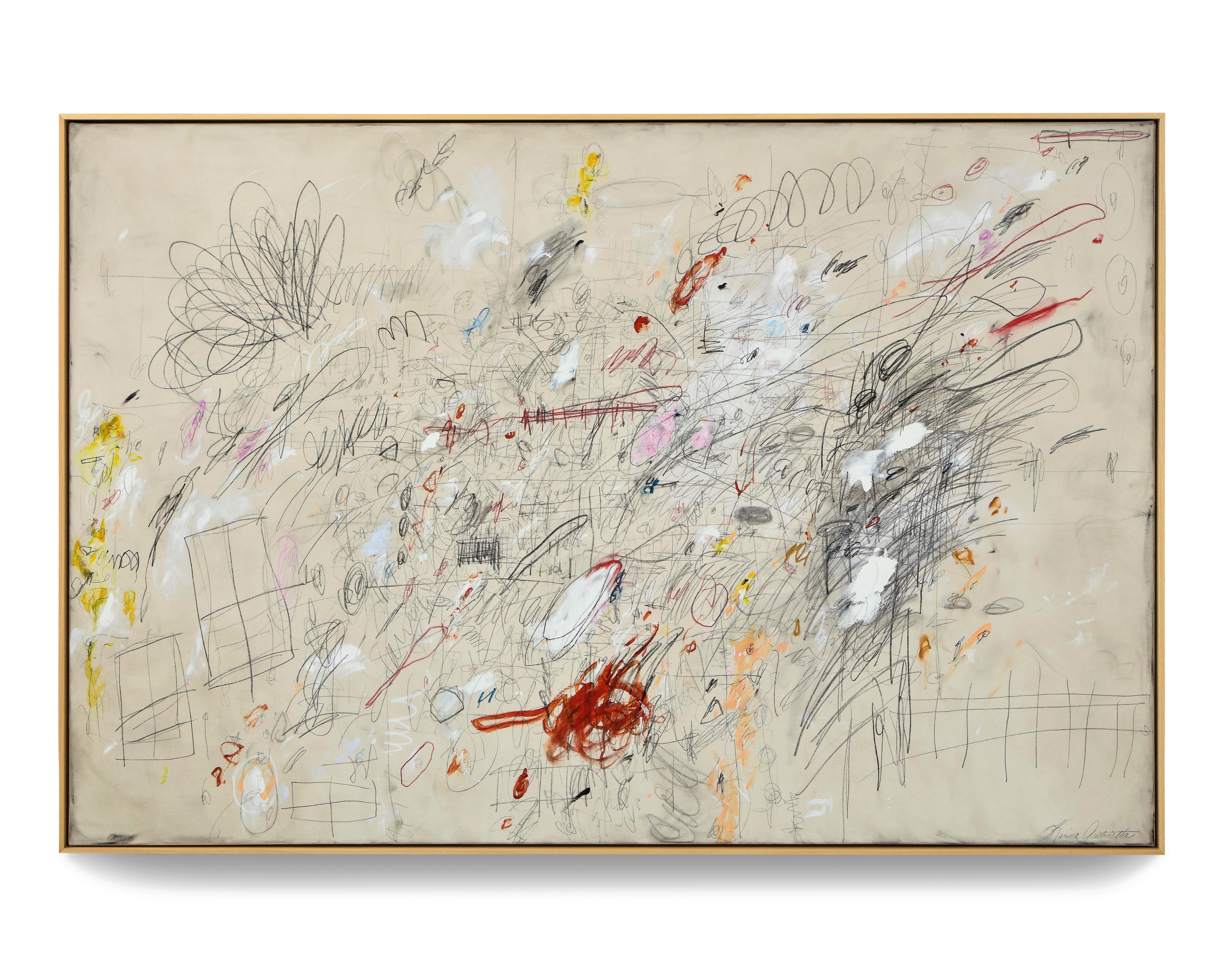 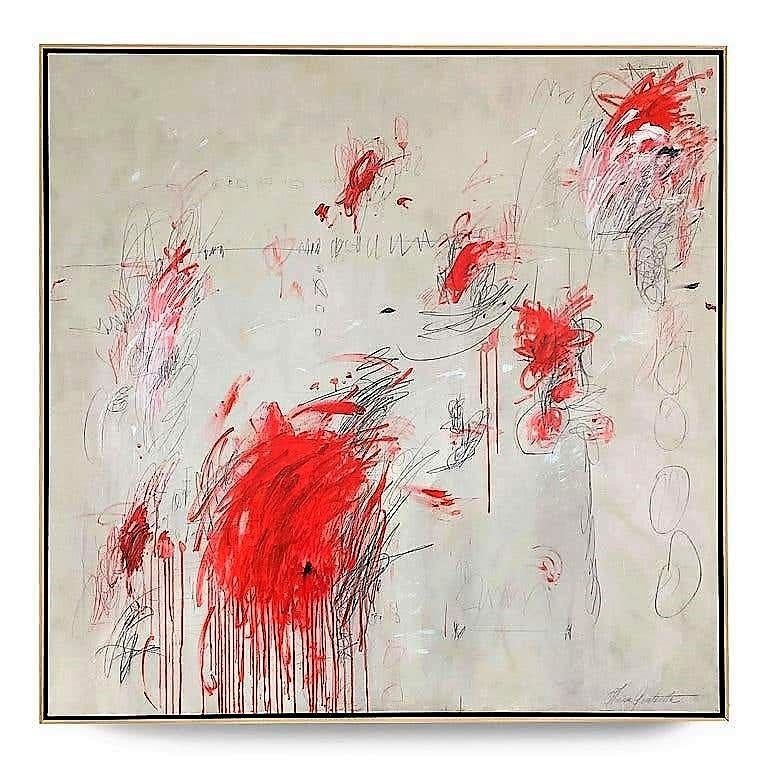 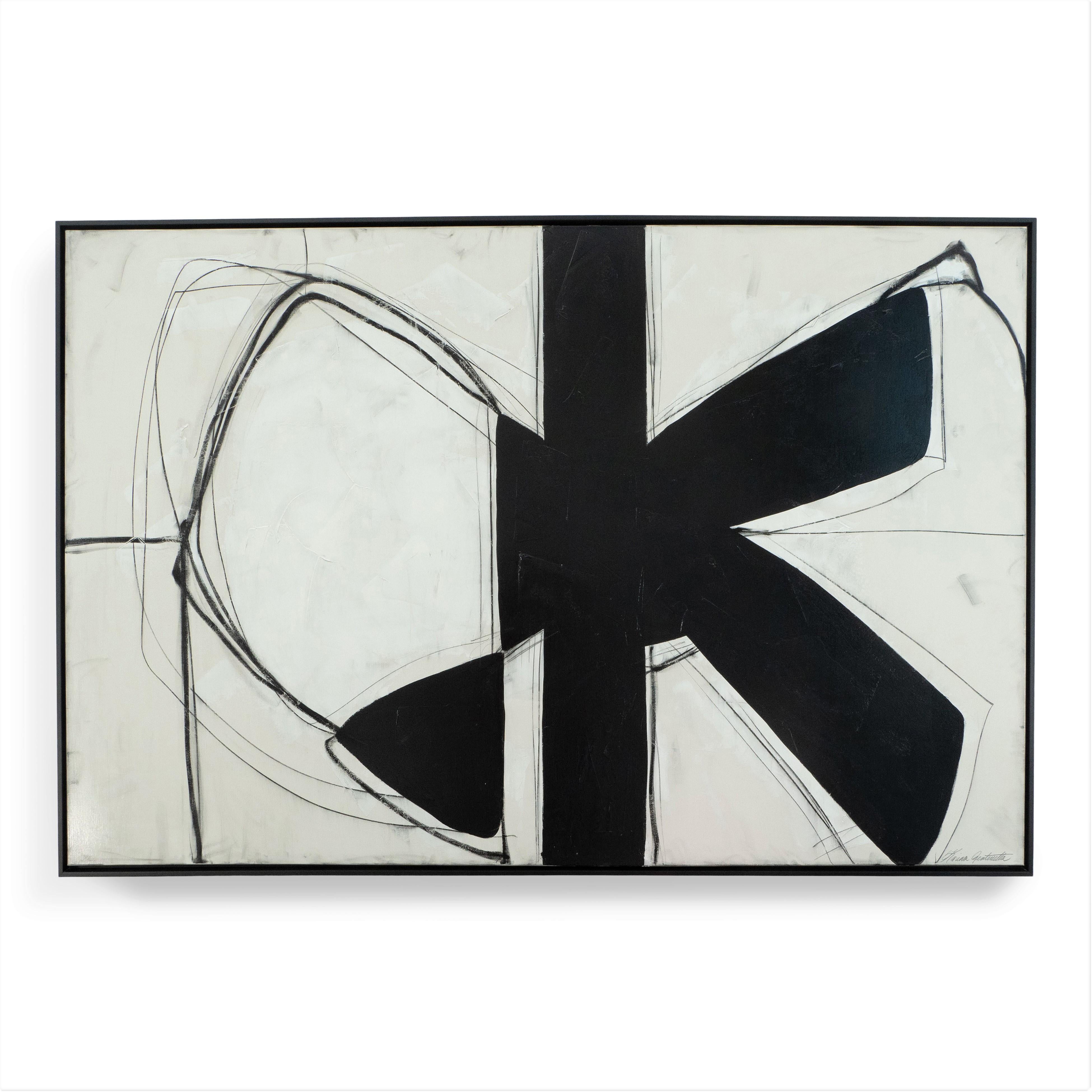 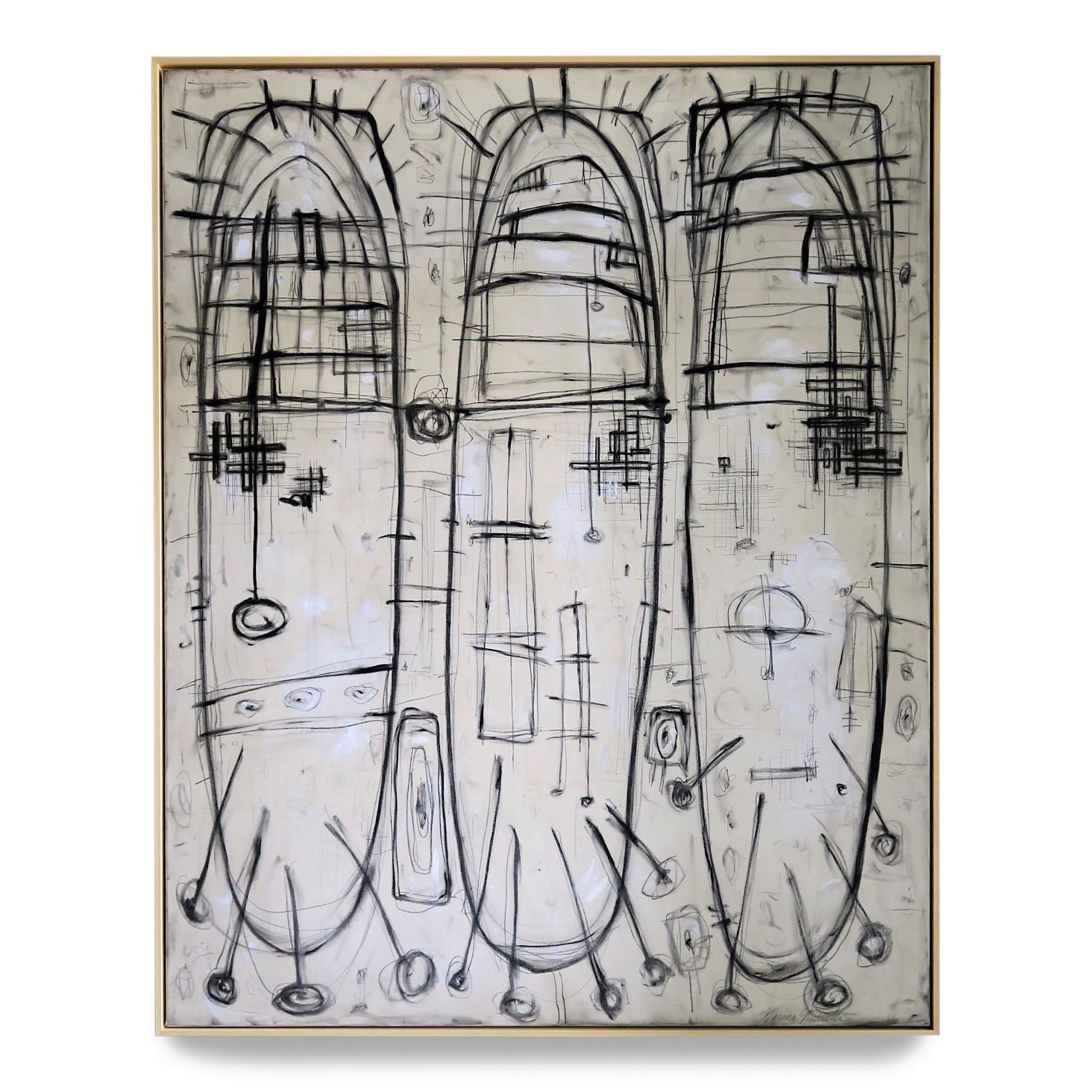 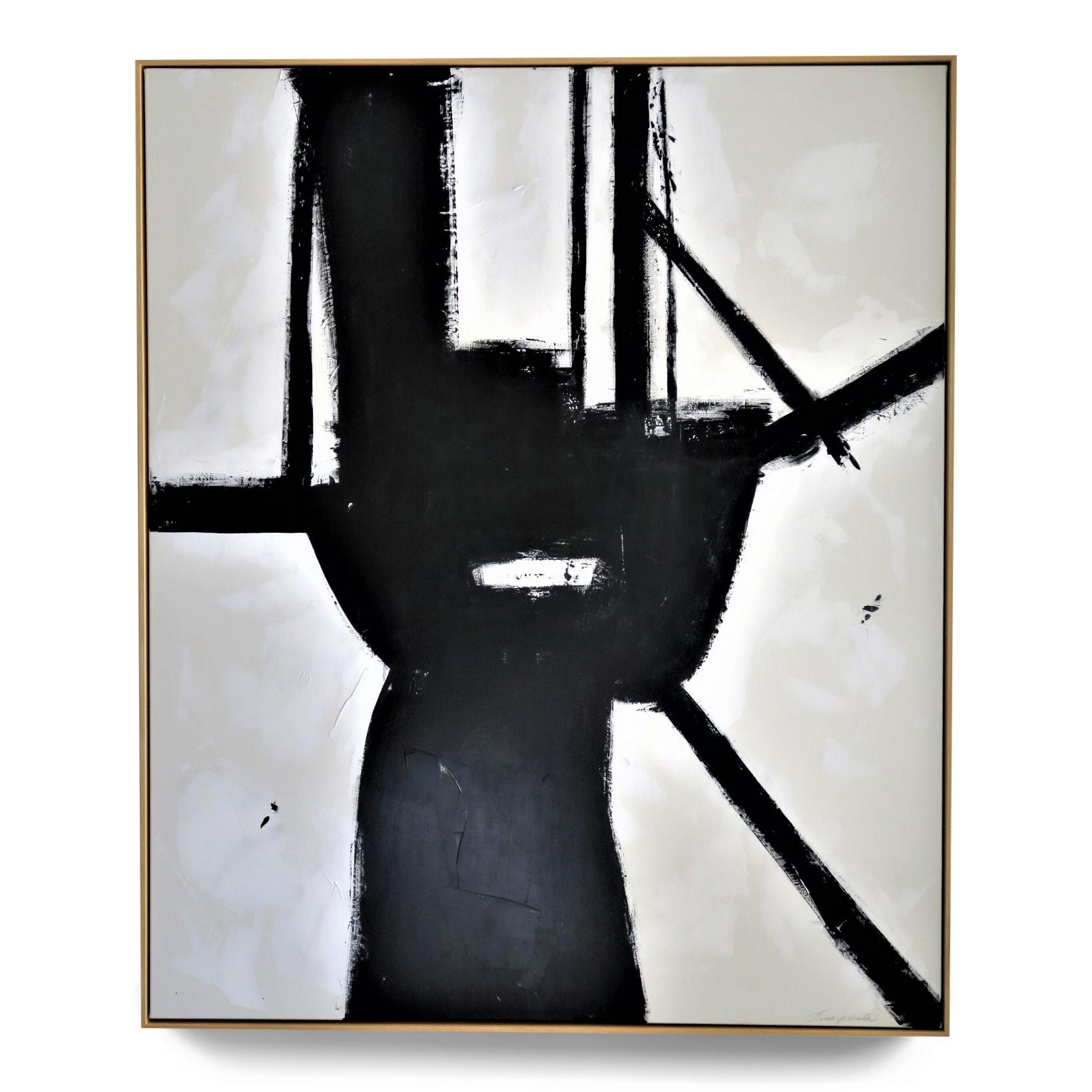 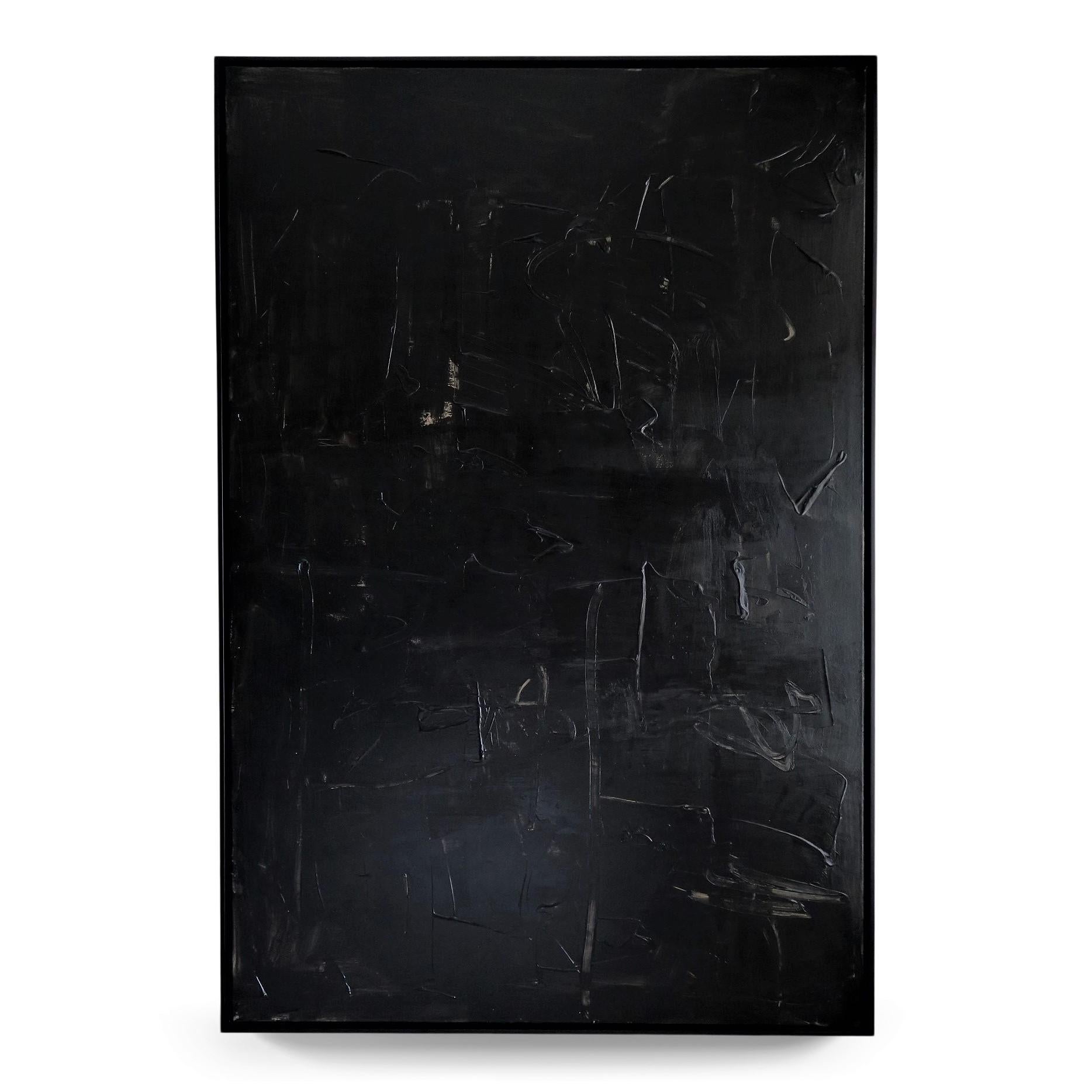 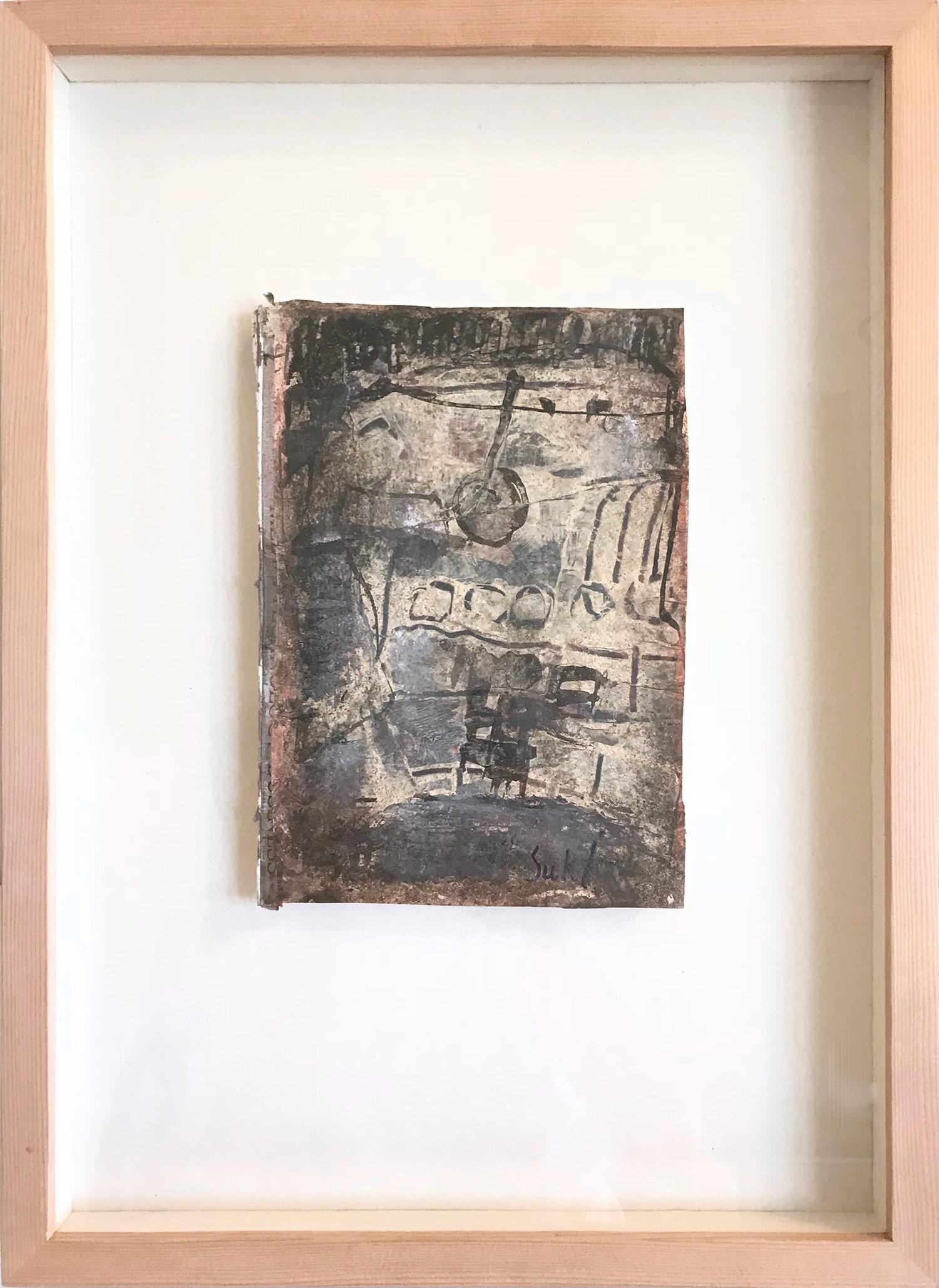 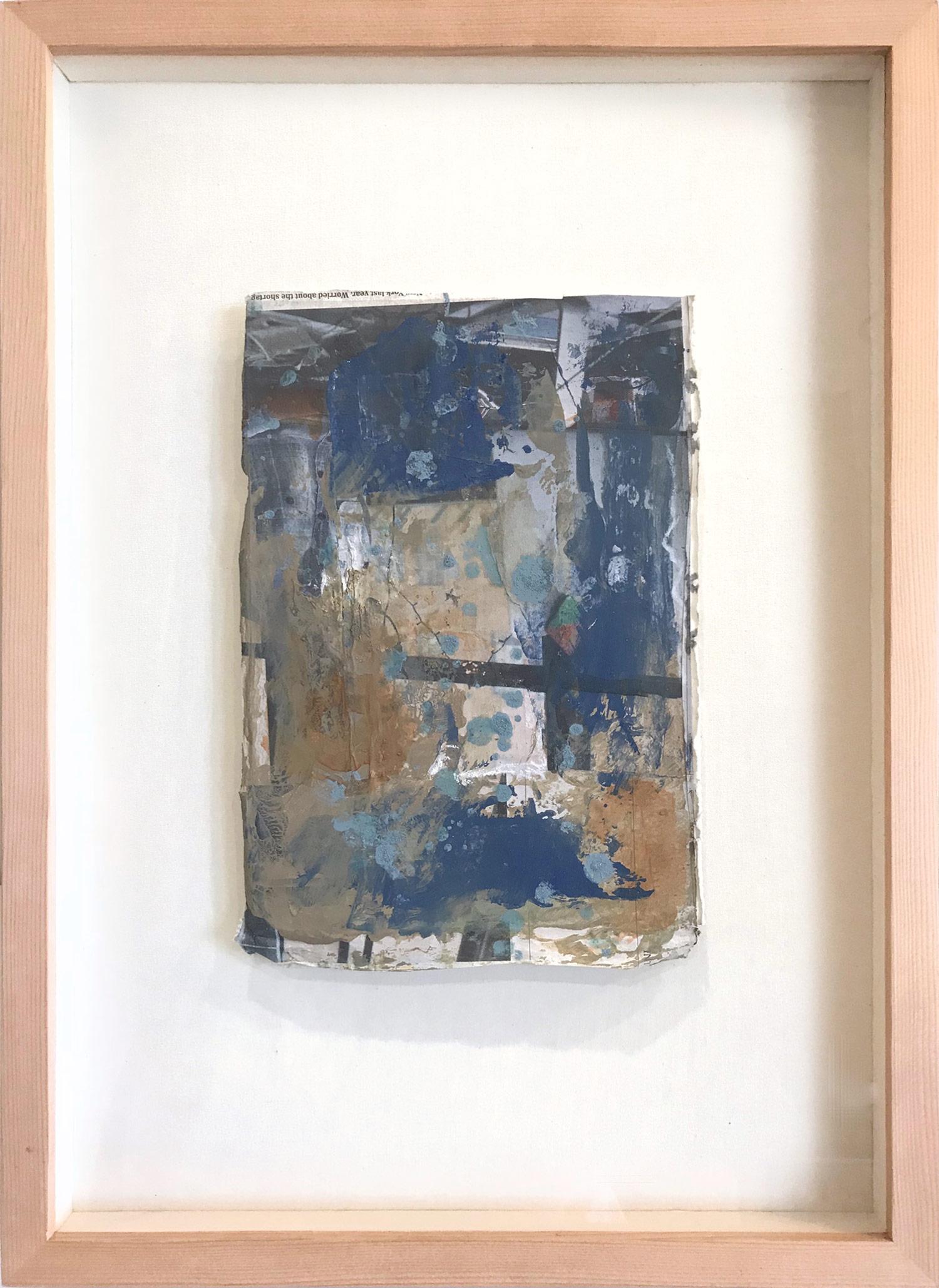 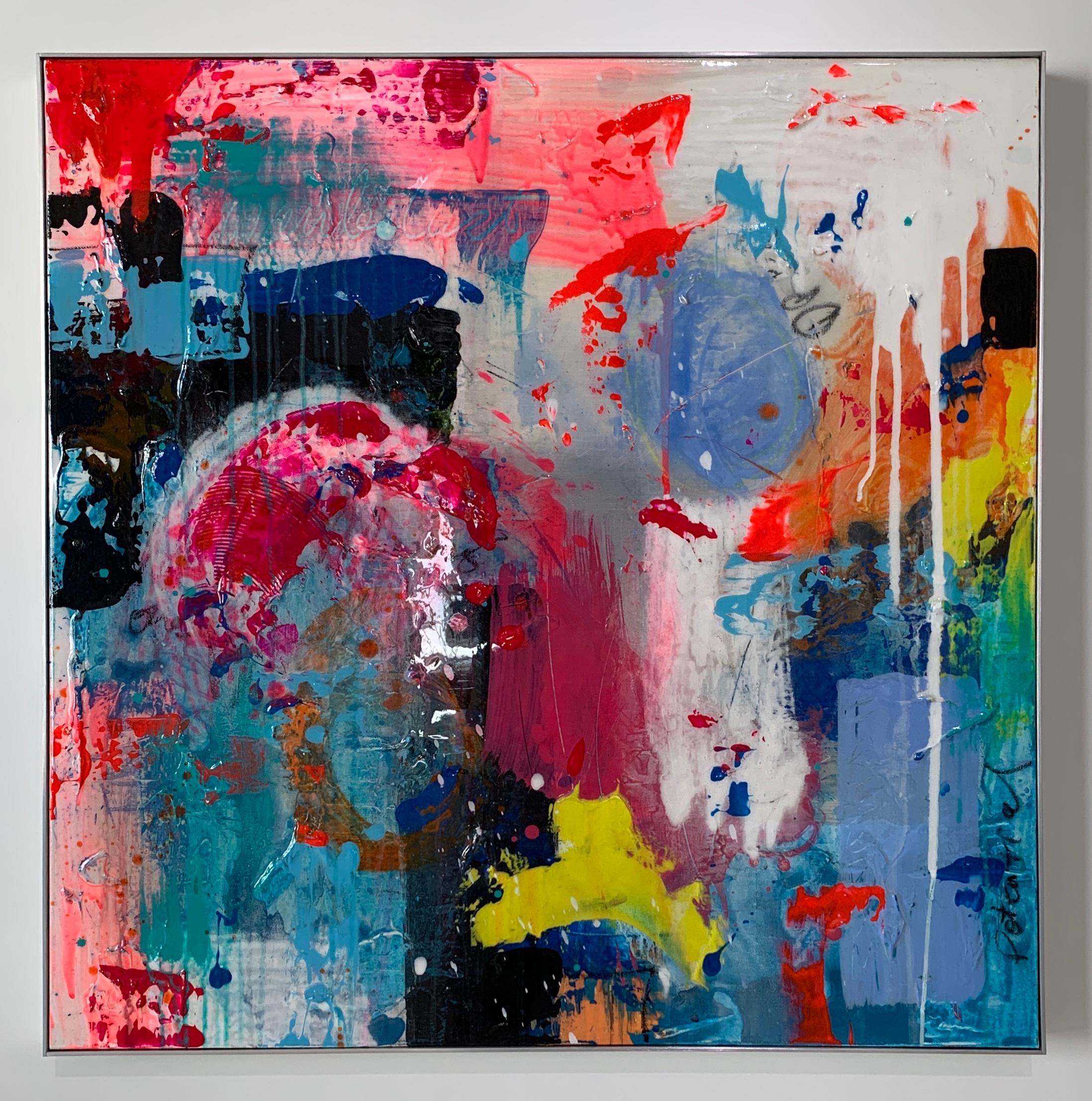 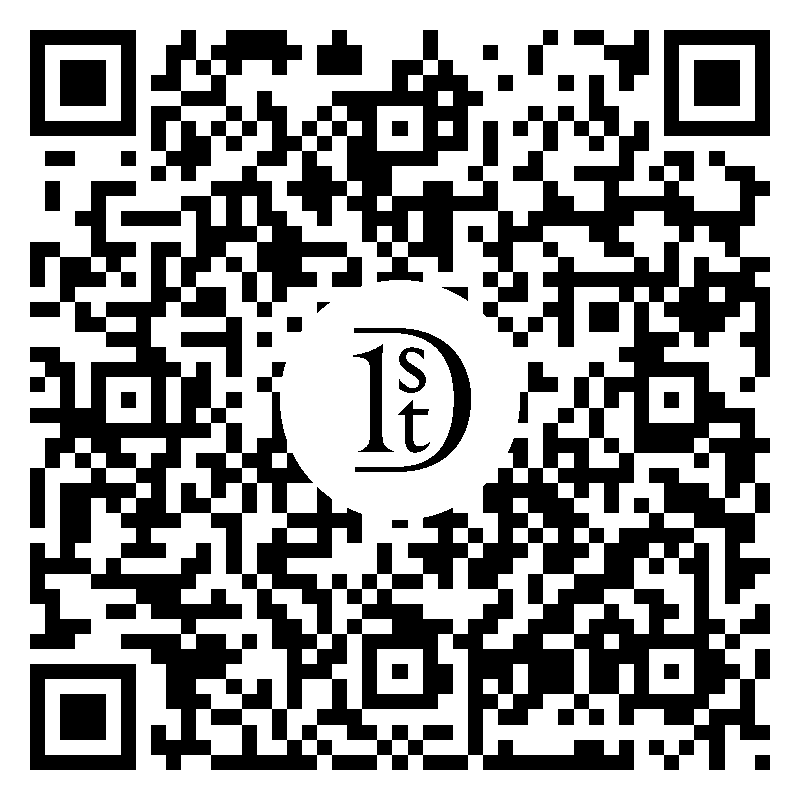 "Primal Faces I", 2019, 40" x 60" acrylic, pencil and oil pastel on canvas by Argentine born artist Karina Gentinetta (featured in Elle Decor, the New York Times, Traditional Home, Veranda Magazine and Luxe Magazine). This work is a raw display of emotion at a very basic level. Muted pencil markings are contrasted with bold black and white charcoal and oil markings representing a juxtaposition between innocence and passion. There is a sense of vulnerability about this work which has a beauty all its own. Painted in warm hues of white and black. Measures: 41.5" x 61.5" framed, vertical orientation. Professionally framed in a gold/black floating frame. "Primal Faces I" may be purchased with its companion work, "Primal Faces II" which is listed separately. Price in this listing reflect single painting. This painting is on display at The Gallery at 200 Lex in the New York Design Center. Commissions available in other sizes. Karina Gentinetta's vast and audacious canvases are inspired by her home city of New Orleans. A litigator for thirteen years, Gentinetta found herself at a crossroads after losing her family home and the majority of her possessions during Hurricane Katrina. Turning to art and design for solace, the self-taught artist was inspired to leave her law practice to pursue her creative passions in the shocking aftermath of the storm. Redolent of the shattered landscape of New Orleans in the wake of Hurricane Katrina, Gentinetta’s paintings evoke the broken frames of flooded homes and the city's devastated infrastructure. Downed telephone lines, random piles of debris and condemned buildings are all present in the thick brushstrokes and intrepid lines that mark each canvas. The artist uses materials that are purposely indicative of construction sites, including wall plaster, varnish and house paint acrylics, imbuing the works with both a subjective symbolism and forceful aesthetic. Using a monochromatic color scale, the stark paintings juxtapose opposing sentiments including vulnerability and strength, chaos and balance. The bold, abstract compositions speak to a multiplicity of themes including grief and despair, but above all celebrate the triumph of rebirth and hope over loss and devastation. Gentinetta’s works have received national and international recognition and have been featured in such publications as The New York Times, Elle Décor, Luxe, Veranda, Traditional Home and More Magazine among others. Most recently, Gentinetta collaborated with RH Modern on a limited edition series which was successfully received and sold out. Her works can be viewed on 1stdibs online and personally at The Gallery at 200 Lex. Commissions may be requested.

About the Seller
5 / 5
Located in New York, NY
Vetted Seller
These experienced sellers undergo a comprehensive evaluation by our team of in-house experts.
Established in 2009
1stDibs seller since 2019
43 sales on 1stDibs
Typical response time: <1 hour
More From This Seller