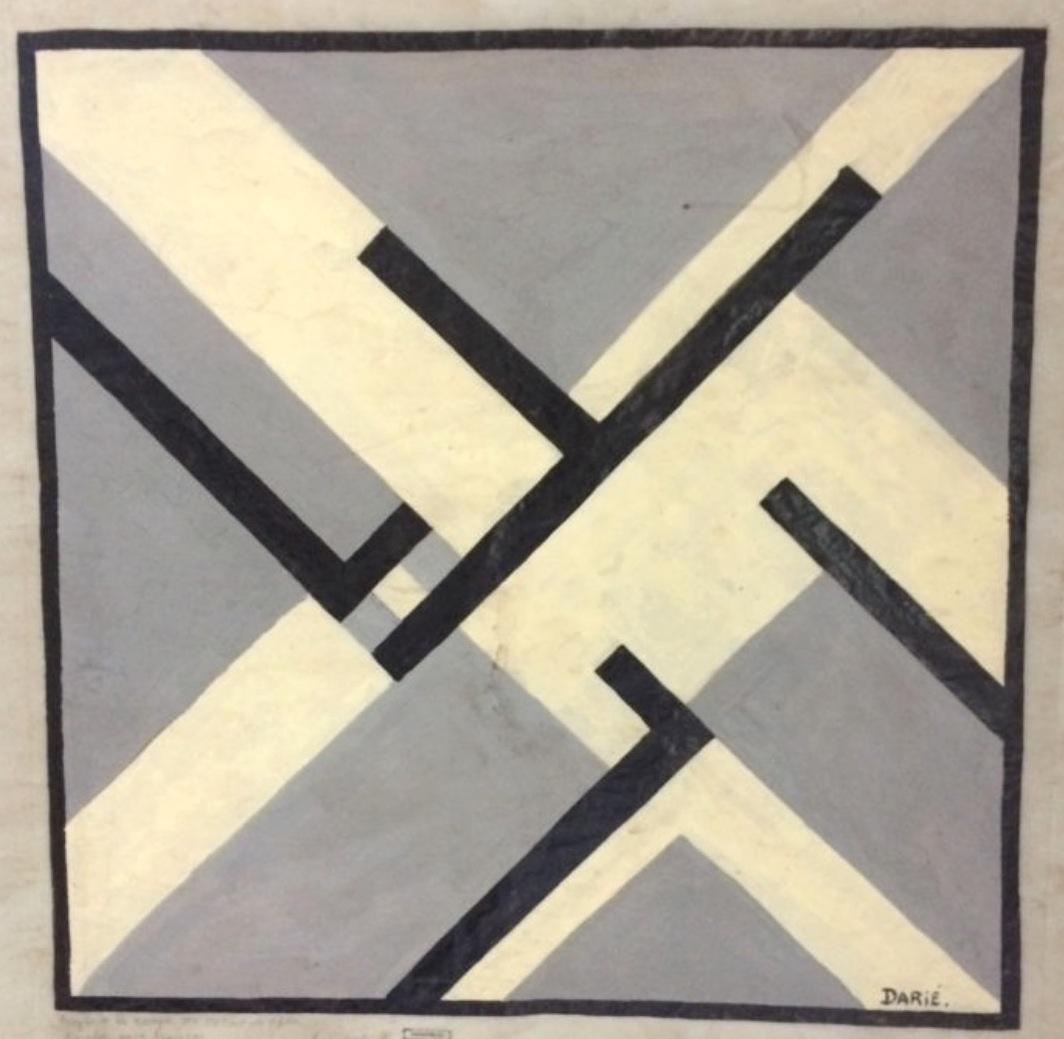 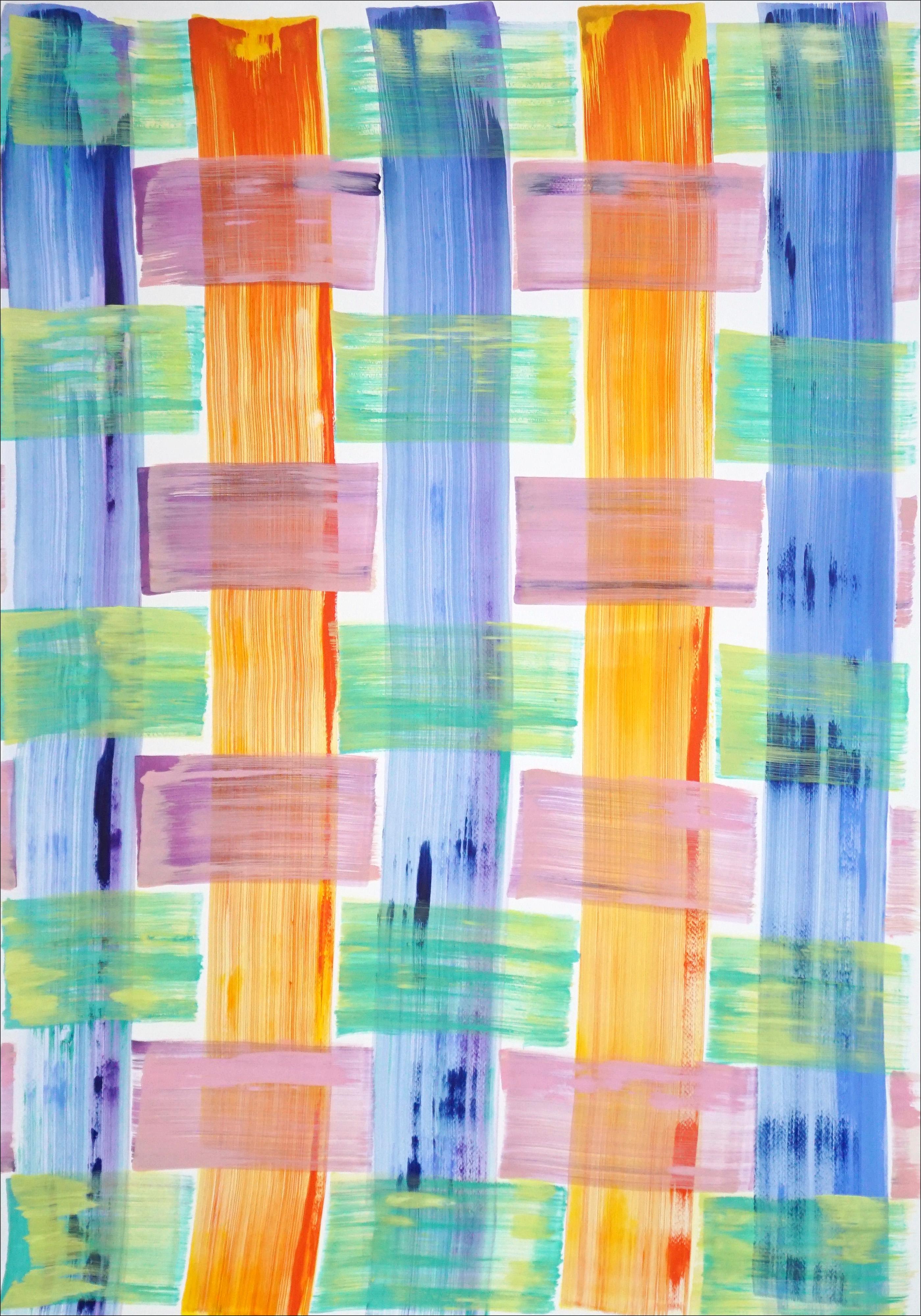 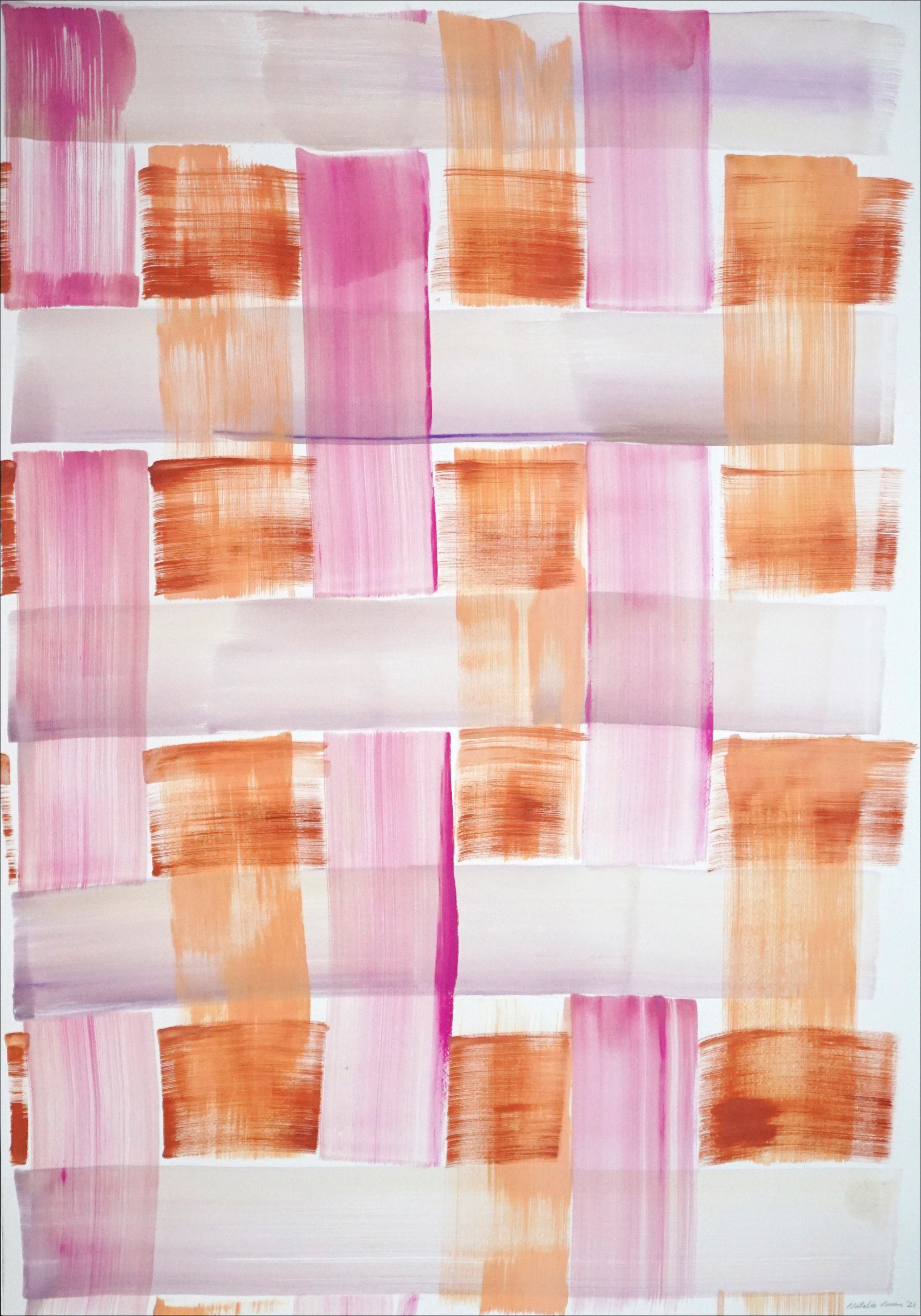 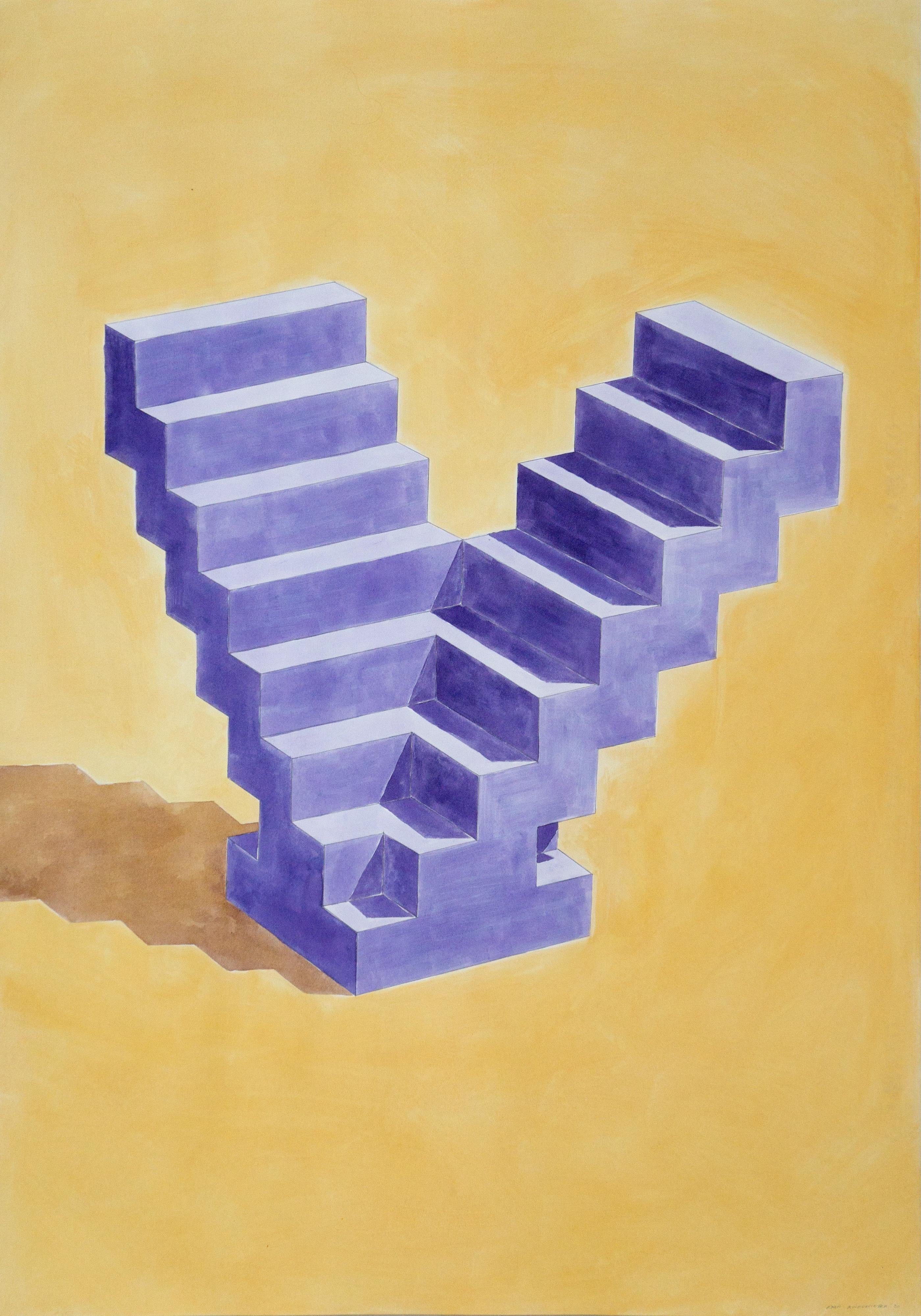 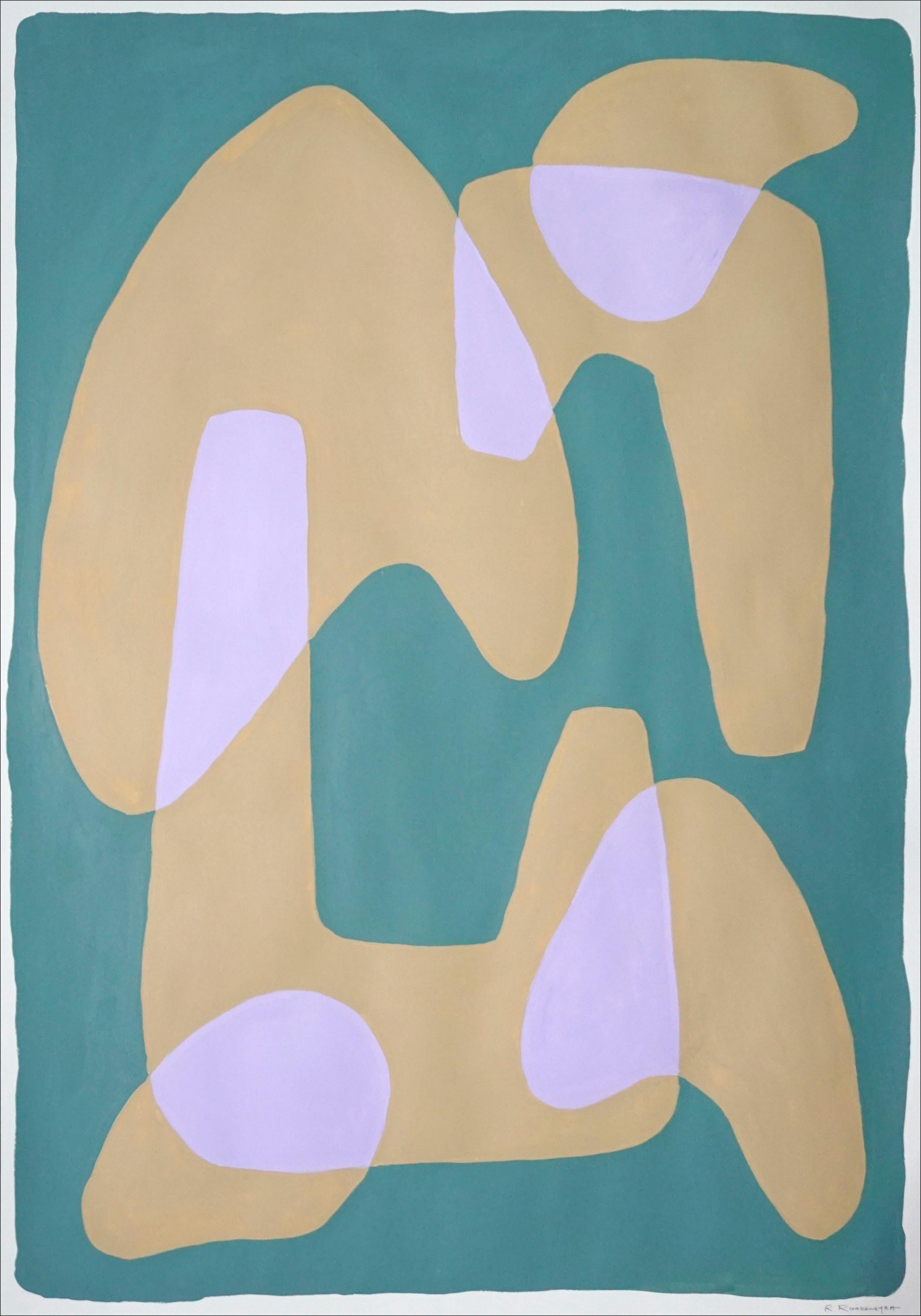 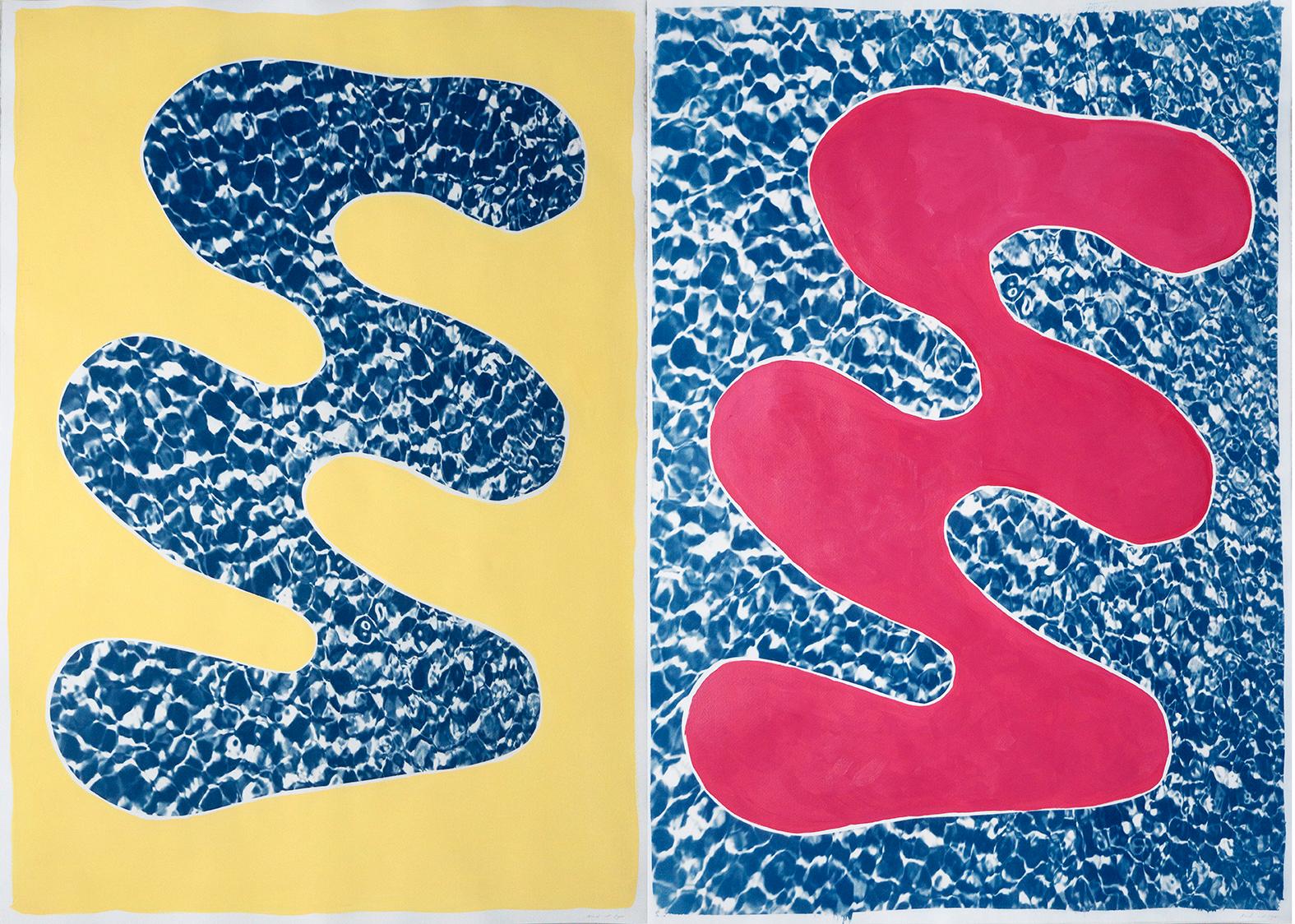 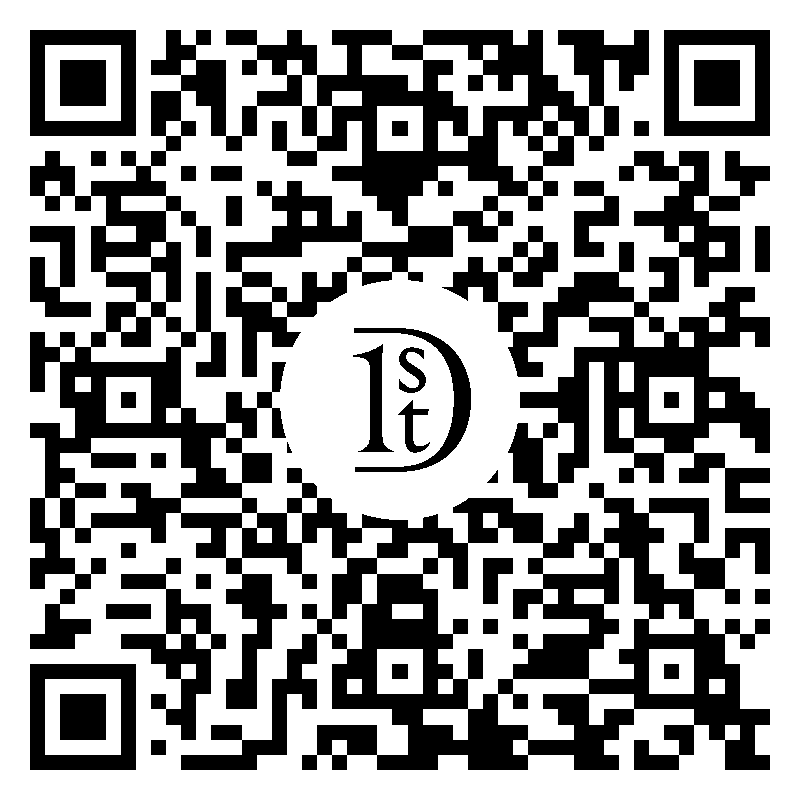 Abstract geometric composition by Cuban artist, Sandu Darie (1908-1991). Untitled, ca. 1960. Ink, paint and paper collage on folded paper sheet measuring 9 x 29 inches. Framed measurement: 16 x 36.5 inches. Signed in multiple areas. The piece is designed to be presented in any of four orientations, vertically or horizontally. Provenance: Corporate Collection, Miami, FL. Condition: Foxing evident. One small area of water staining at fold. COA accompanies the piece. Sandú Darié was a contemporary Cuban visual artist. Born in 1908 in Romania to Jewish parents, he originally planned to become a lawyer until he and his family migrated to France due to the increasing political turmoil in his native country, becoming part of the "...first wave of literary and artistic members of the Romanian avant-garde diaspora;" frequenting the circles of famous writers and artists. This close contact with the Romanian avant-garde, as well as the exposure to European and Latin American art movements and philosophies, influenced Darié's decision in becoming an artist. He emigrates to Cuba in 1941, where he creates his most important body of work. In Cuba, he co-founded the concrete abstractionist group Los Diez Pintores Concretos (the Ten Concrete Painters) known simply as, Los Diez (the Ten) along with artists Loló Soldevilla and Pedro de Oraá. He lived and worked in Cuba for the remainder of his life until his death in 1991. Sandú Darié Laver was a Cuban artist of Romanian heritage, who initially introduced Concretism or Concrete art to Cuba with his 1949 exhibition of eight works at the Lyceum in Havana.[3] He emigrated to Cuba in 1941 and fully embraced the island's culture and artistic vitality, nationalizing himself as a Cuban citizen. In Cuba, he presented himself as a strong advocate for geometric abstraction and concretism; joining and exchanging ideas with similar groups in Latin America such as the Argentinian Concrete Art movement and the abstract art group Madí.[4] He represented Cuba at the 1953 São Paulo II Bienal, took part in the Concrete Cuban manifesto in the 1958 exhibit in Havana of Los Diez Pintores Concretos, and was subsequently referred to as “the prophet of Concretism” by his contemporaries. Darie exhibited globally in such art meccas as New York, Paris, Brazil, Italy, and Japan among others, leading the Cuban Concrete art movement to the international stage.[5] Darié was not exclusively an artist, the prolific painter also dabbled in writing, journalism and art criticism throughout his career, establishing several important organizations dedicated to the promotion of Cuban art. While in Paris from 1926-1939, Darié worked as a cartoonist for a periodical and contributed many humorous drawings for the French press. In 1949, after deciding to remain in Cuba he co-founded the Asociación de Caricaturistas de Cuba (Association for Cartoonists in Cuba), from 1950-1957 he was co-editor of the magazine Noticias de Arte. From 1958-1961, he was part of the Diez Pintores Concretos, although they were short-lived their impact on Cuban Abstraction, especially Darié's work, gave Cuban Concrete Abstract art great significance in its own right. In 1961, the closing of Galeria Color-Luz marked the official dissolution of Los Diez. However, later that same year Darié also helped establish the Unión de Escritores y Artistas de Cuba (The Union of Cuban Writers and Artists) known simply as UNEAC; he also worked as an art advisor in El Grupo Experimental de Danza de la Habana (The Experimental Dance Group of Havana); from 1963-1969 he worked as a documentary filmmaker in the Cuban Institute of Art and Cinematography (ICAIC); in 1971, he worked as the director of light and set design for the ballet “Dinamia“ at the National Ballet of Cuba in Havana; in the 1980s he also served as a juror in several art exhibitions and galleries including the Museo Nacional de Bellas Artes and Galleria L in Havana.[6] He died on September 2, 1991 in Havana, Cuba at the age of 83. History[edit] A pioneer of Cuban concrete abstraction, Darié was also considered to be a neo-constructivist and kinetic artist due to the versatility, geometric simplicity, and the expression of Constructivist values of his works. Constructivism like concretism is an introverted, objective artform, leaving to contemplation a simple compilation of grids, shapes, colors and lines. Concretism also leaned away from emotion, subjectivity and representation; without narrative or natural connections, Constructivism (like Concrete art) developed intrinsic designs that expressed 20th century Europe's social ideas and aesthetics like industrialization, progressivism, and rationality.[7] From which came the fundamental idea of Cuban Concretism: abstraction as a revolutionary, forward-thinking art form, led by the purity of the abstract form, liberating the artist from realism or nationalism.[8] Sandú Darié's works follow the fundamental stylistic tenets of Concrete art: a varied combination of geometric planes, primary colors and forms geometrically interlocked, similar to that of Piet Mondrian's Neoplasticism.[9] His unique and innovative designs include irregular-shaped canvases, sculptural structures with moving parts that invite the viewer to touch and interact with the piece; touching upon the focus of the Latin American MADÍ movement that, like Cuban Concretism, broke from traditional, vanguardist painting and decided to concentrate on the "concrete" and physical act of art. As a painter, Daríe constantly worked with the relationship of space, light and color with the physical act of viewer participation in the perspective of his works. He often named his works, especially his kinetic sculptures, Transformable in that they were meant to be shifted and interacted with, making his "moving pieces" unique amongst Los Diez.[10] Sandú Darié's work can be found in several private and public collections around the world including the Museum of Modern Art in New York, the David Zwirner Gallery in New York and London, the Beloosesky Gallery in New York, the Museo de Bellas Artes in Havana, Cuba, the Kendall Art Center the Rodriguez Collection in Miami, Florida as well as many others across the globe.[11] Collections List[edit] MoMA, Museum of Modern Art in New York[12] Composition in Red 1946; Untitled: Transformable c.1950s The National Museum of Fine Arts in Cuba[13] Composition no. 2, Twentieth Century in mid–passage 1950; Untitled 1948; Transformable Structure c.1951-1963; Spacial Multivision 1955; Transformable Painting 1957 Beloosesky Gallery in New York[14] Untitled Abstract c.1956

1stDibs Buyer Protection Guaranteed
If your item arrives not as described, we’ll work with you and the seller to make it right. Learn more
About the Seller
5 / 5
Located in Hudson, NY
Platinum Seller
These expertly vetted sellers are 1stDibs' most experienced sellers and are rated highest by our customers.
Established in 2000
1stDibs seller since 2015
165 sales on 1stDibs
Typical response time: 3 hours
More From This Seller

$416 Sale Price
20% Off
Double Staircase, Architectural Watercolor on Paper, Purple & Yellow Sculpture
By Ryan Rivadeneyra
Located in Barcelona, ES
"Double Staircase" is a hand-painted watercolor painting on high-quality 300g paper of a minimalist architectural sculpture, drawn and painted in the style of Sol Lewitt and other mi...
Category

$650
Pool Water Brushstroke Diptych, Cyanotype Print and Acrylic Painting on Paper
By Kind of Cyan
Located in Barcelona, ES
This is a unique mixed media piece: it is a diptych of hand-painted colorful shapes combined with cyanotype prints of pool water texture, giving it a modern, abstract geometric feel ...
Category

$634 Sale Price
20% Off
Turquoise Leaf Cutout on Abstract Cloudy Background, Organic Modern Painting
By Kind of Cyan
Located in Barcelona, ES
This is a unique mixed media piece: it is a hand-painted botanical abstract colorful shape upon a background that is a cyanotype print of a cloudy texture, giving it a modern, abstra...
Category