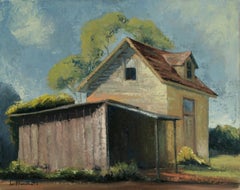 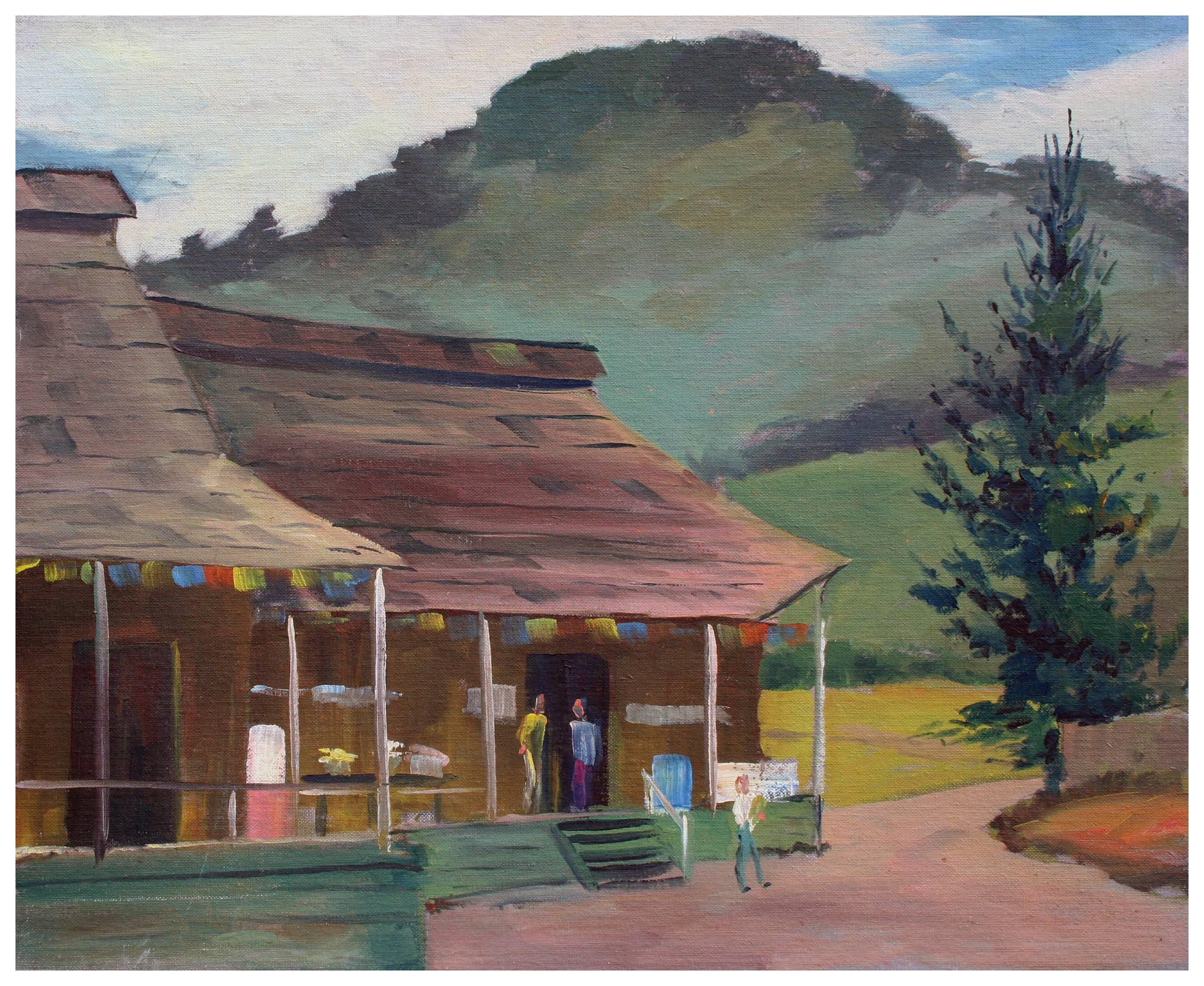 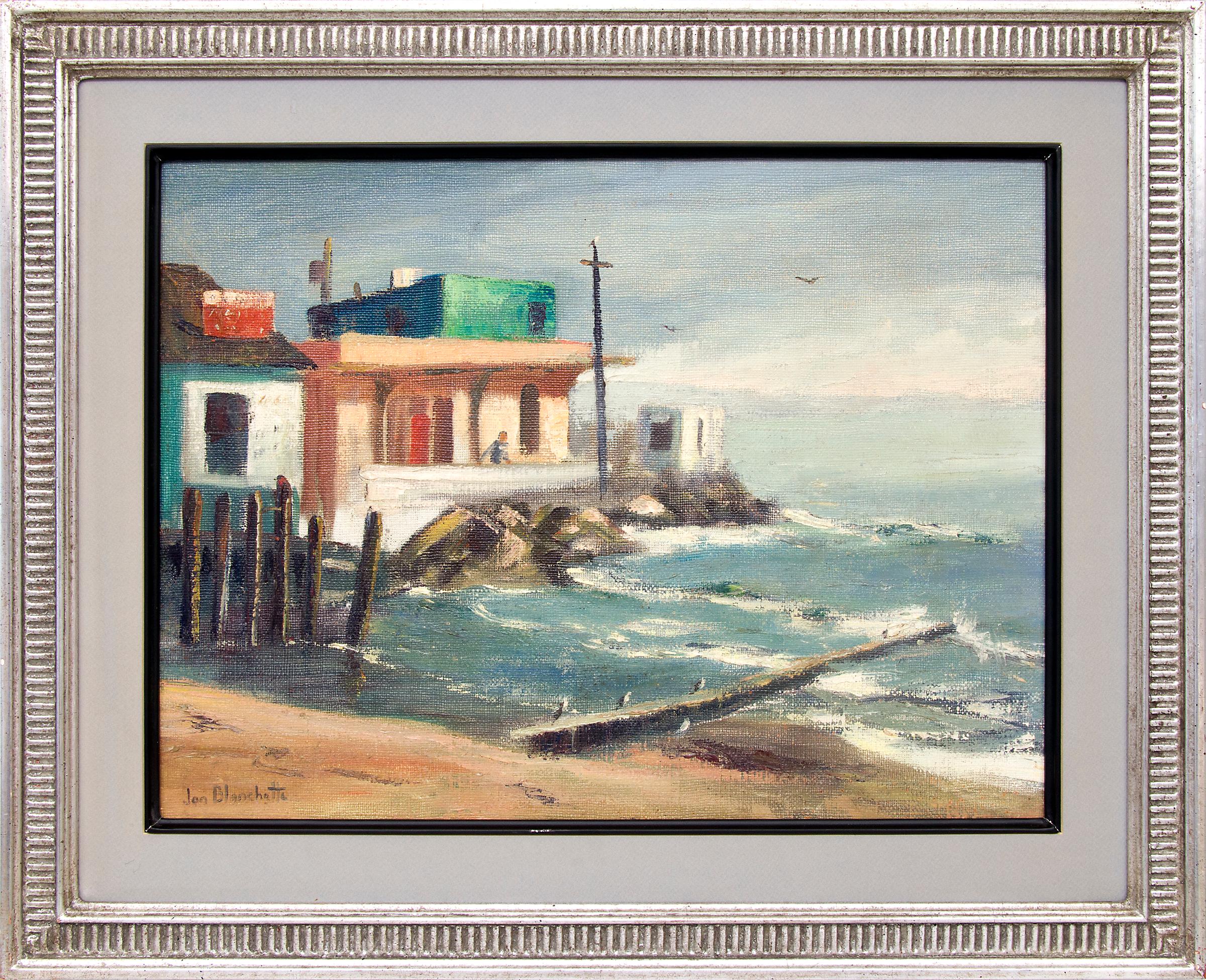 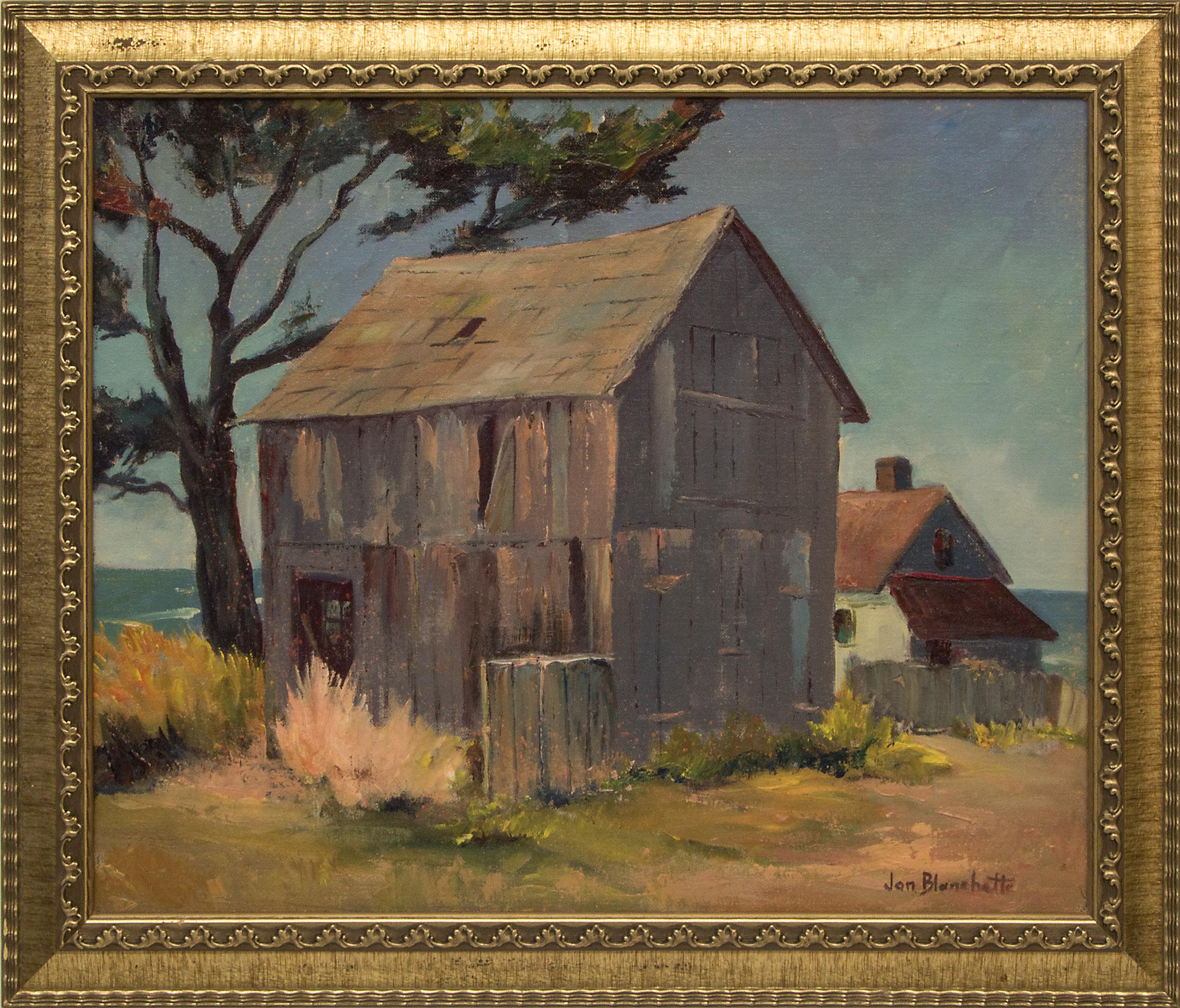 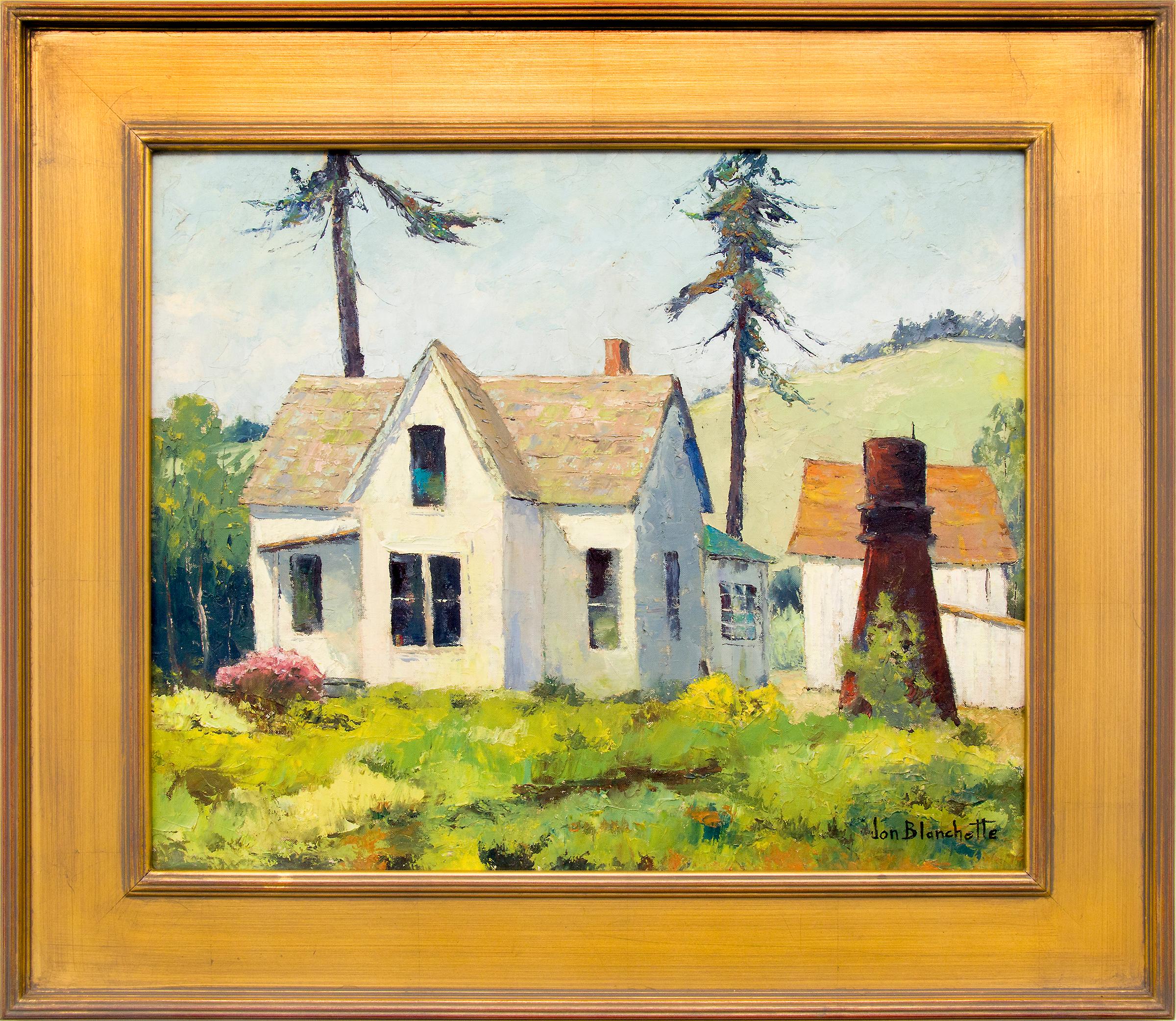 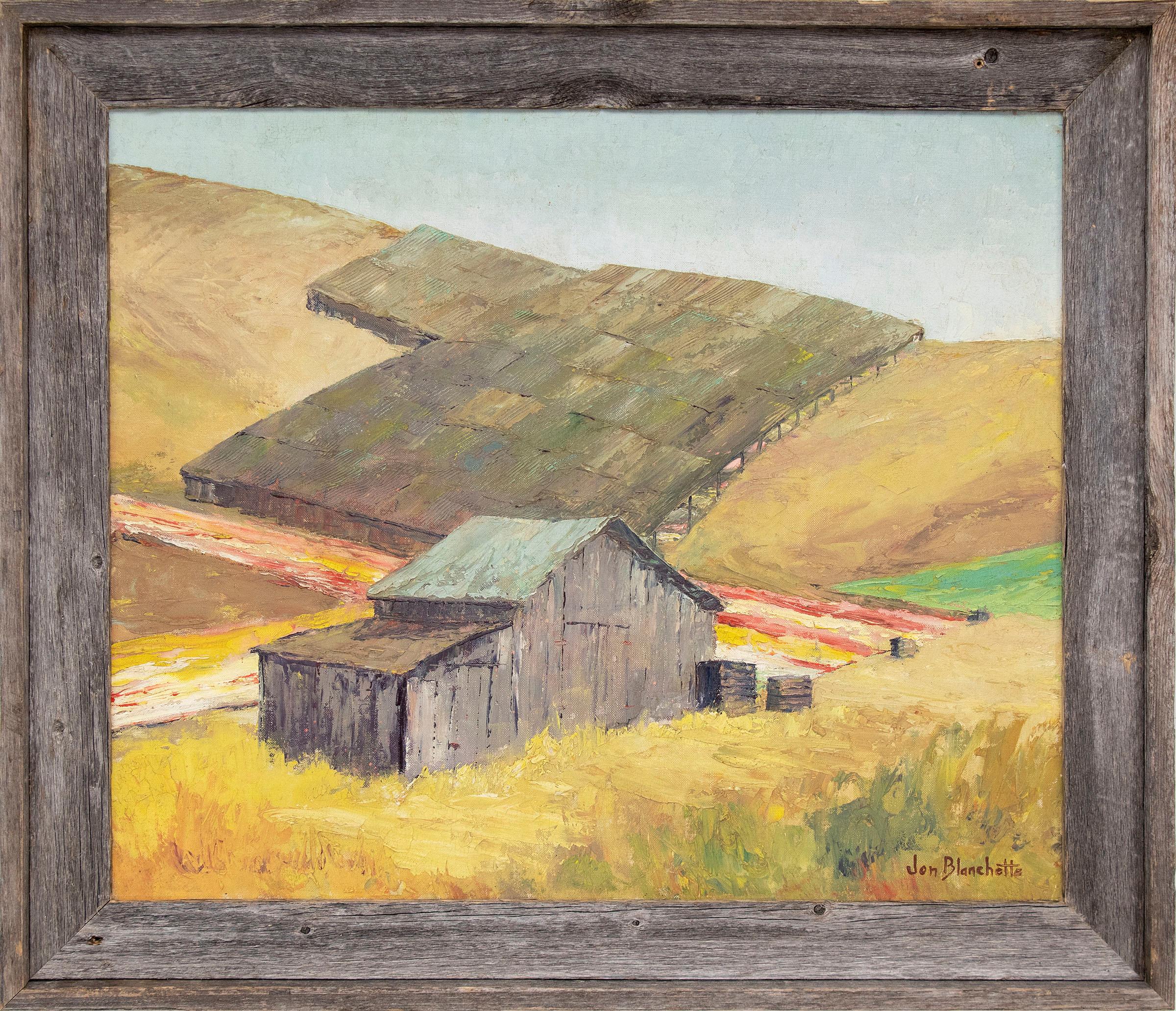 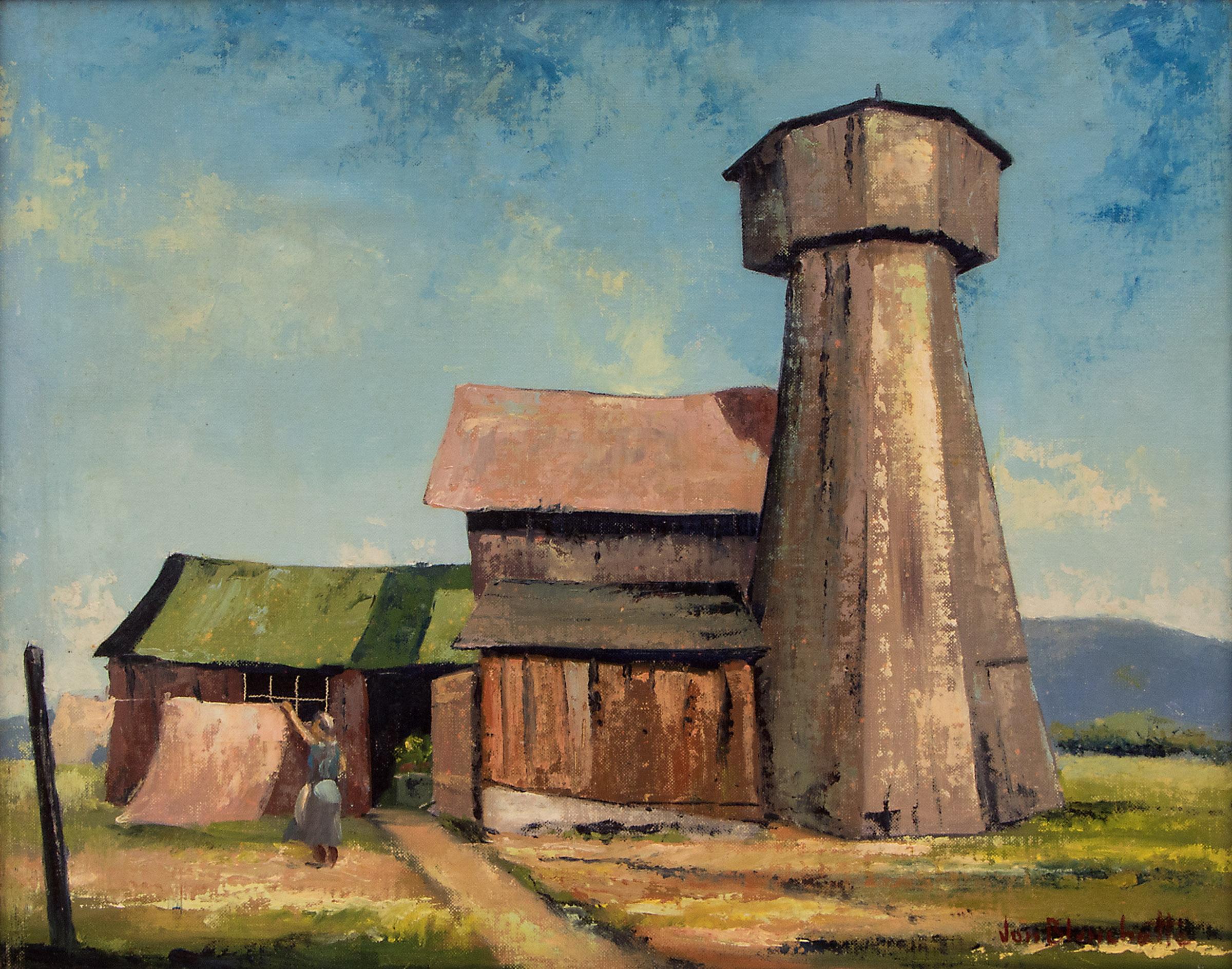 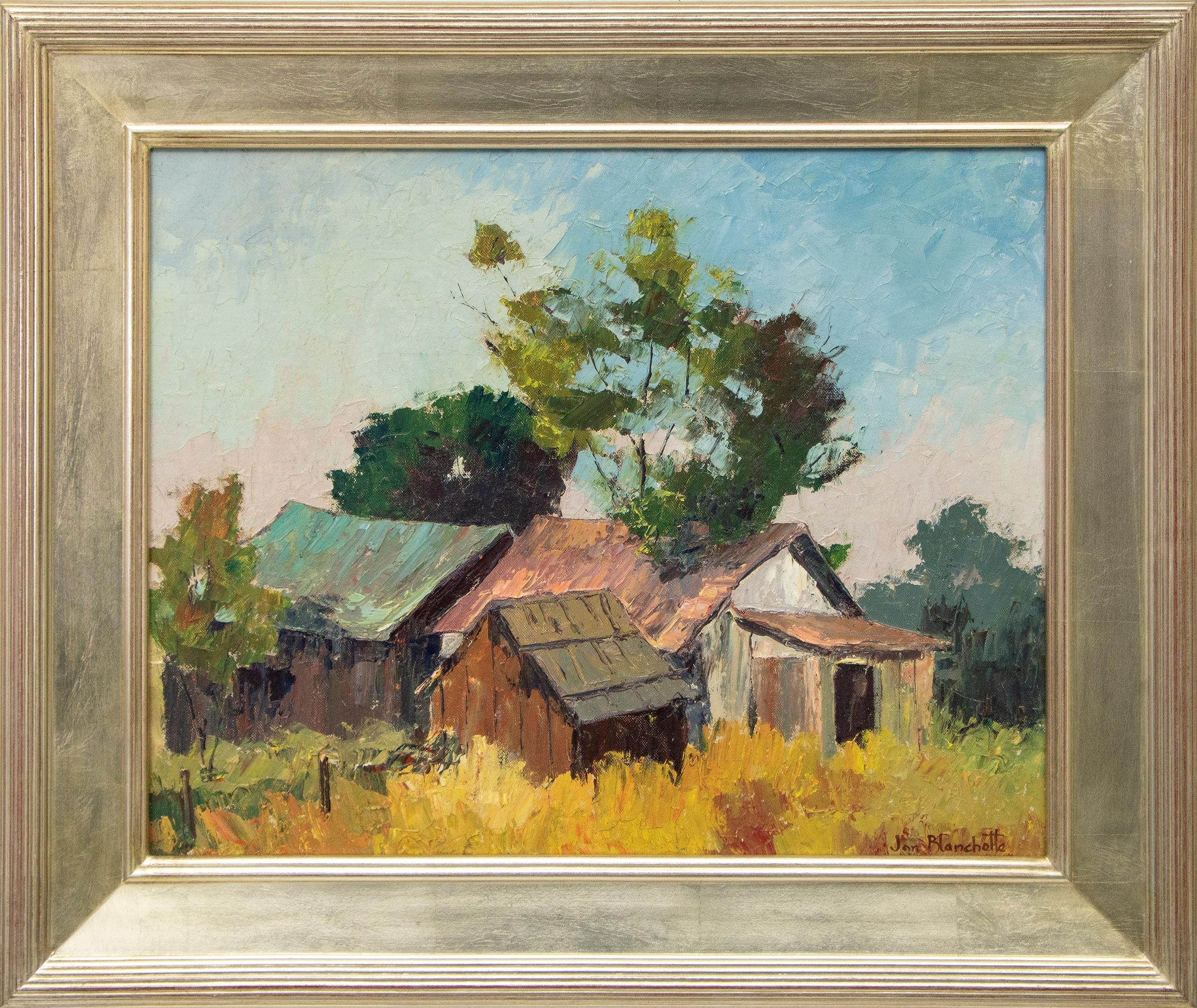 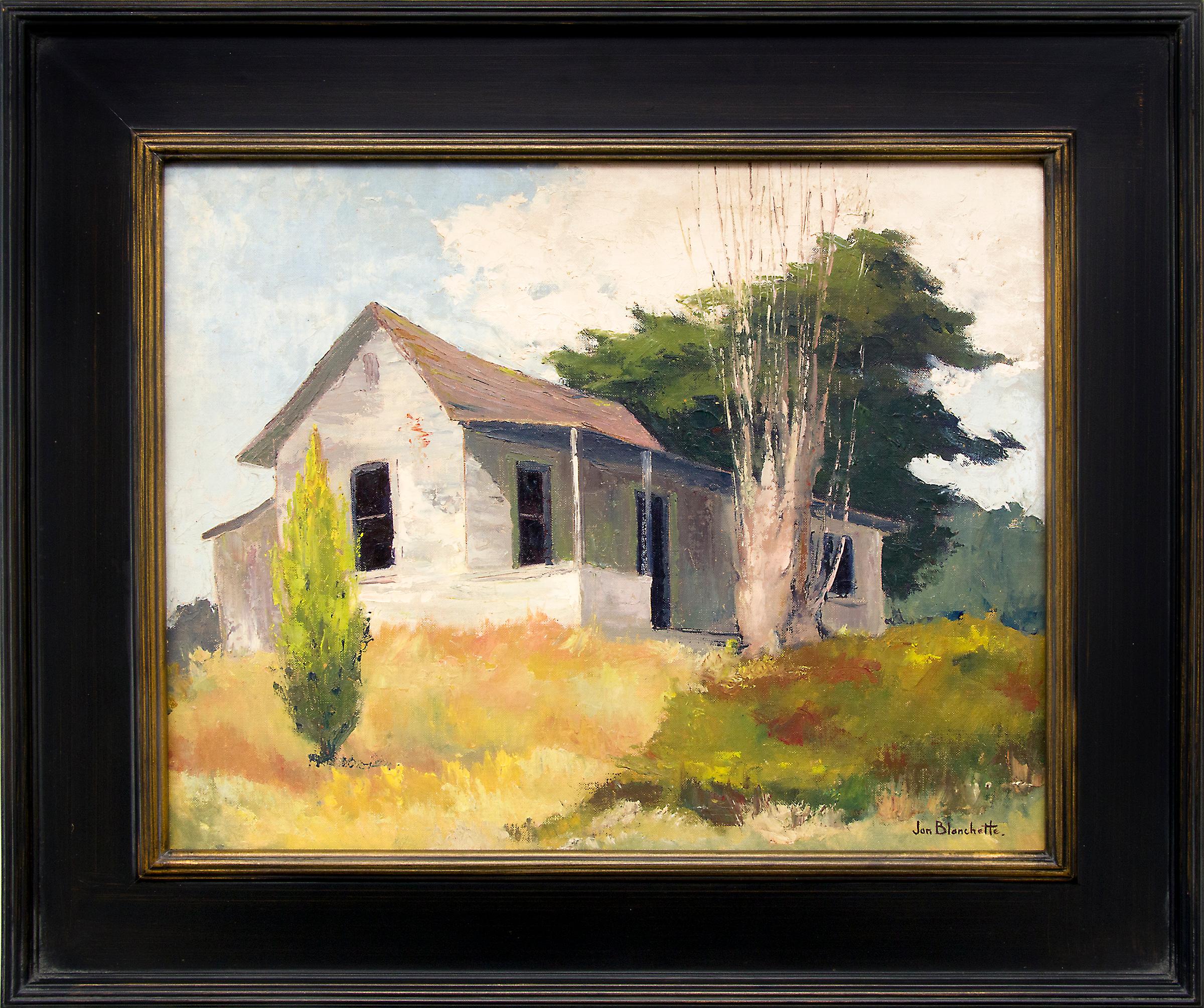 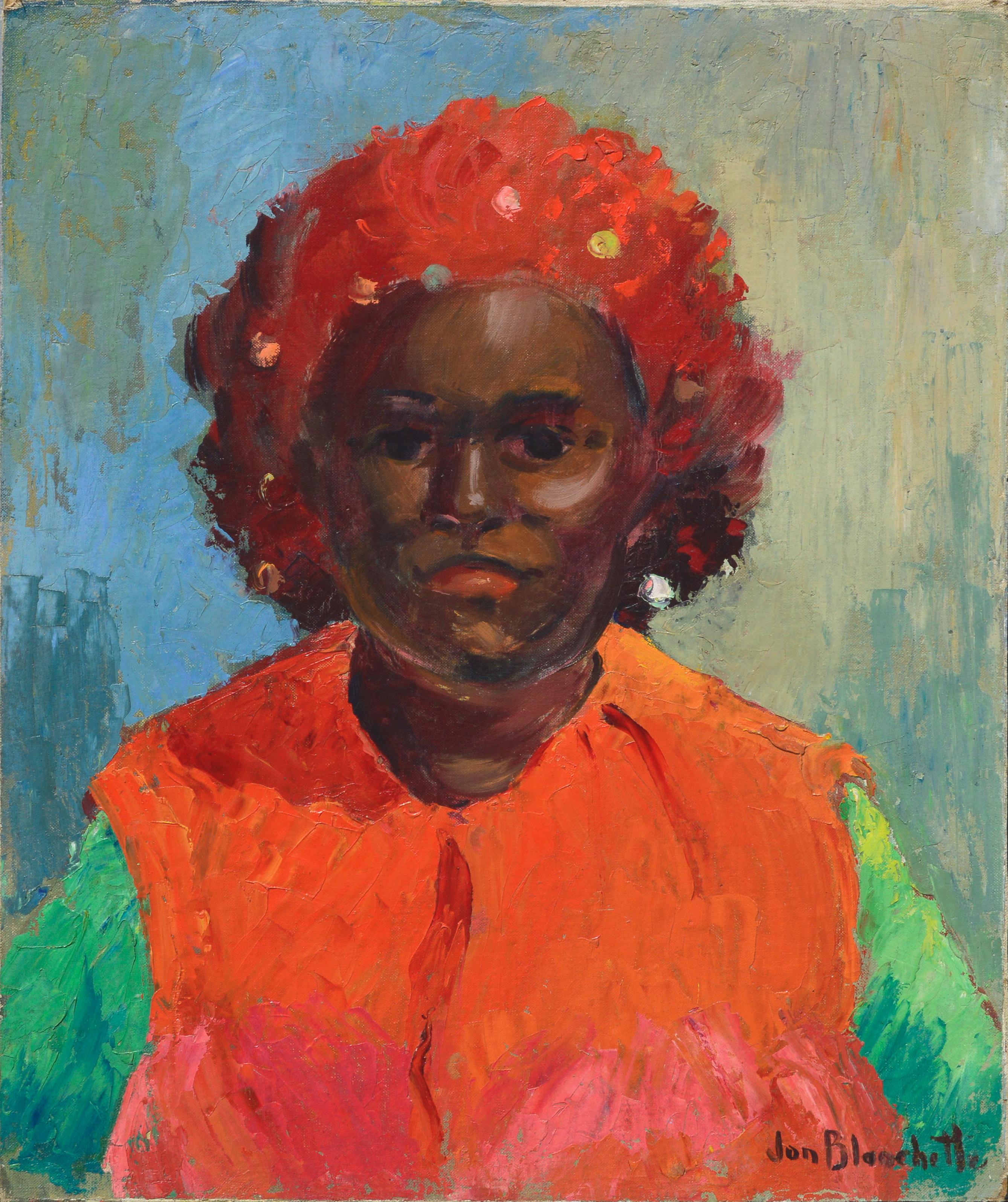 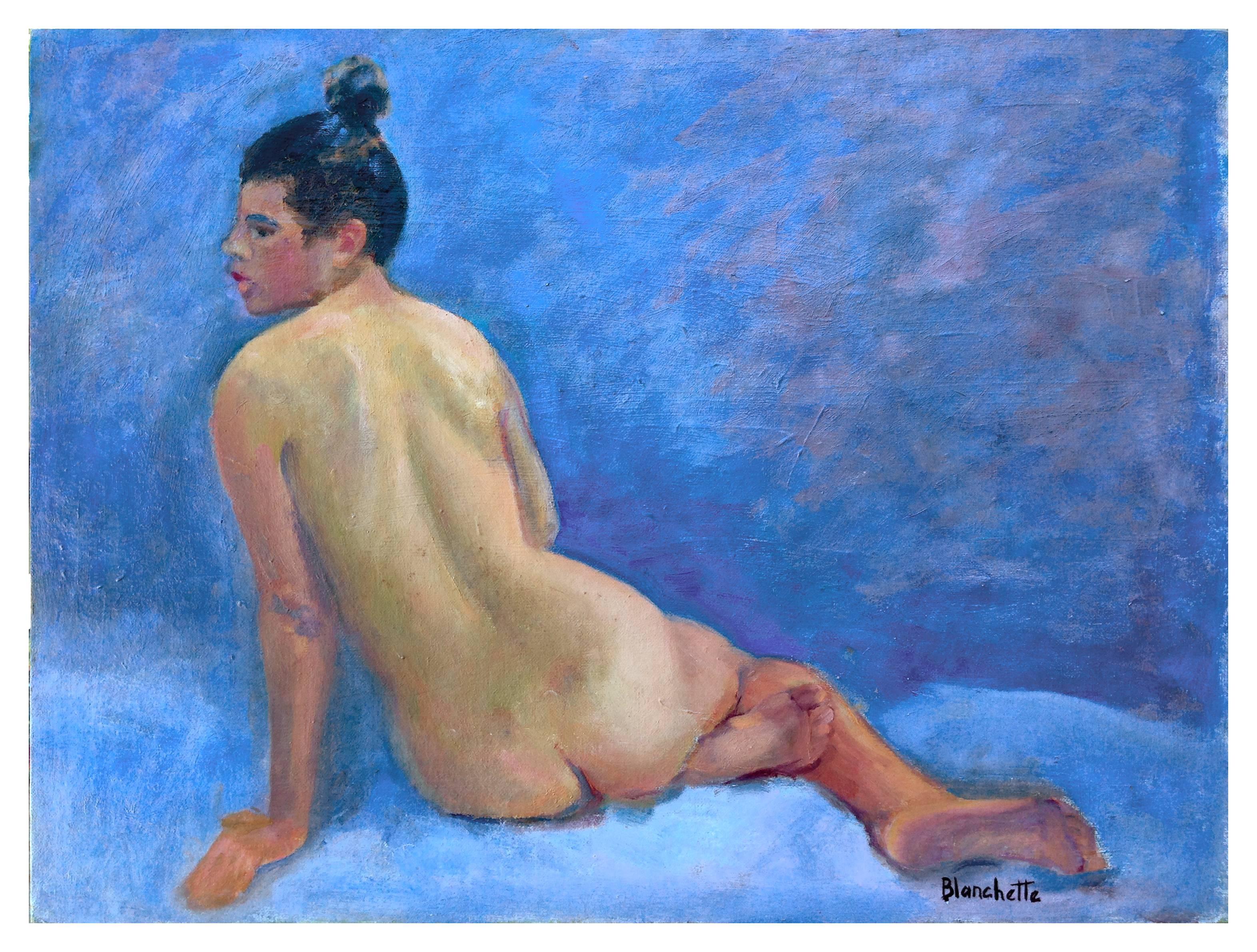 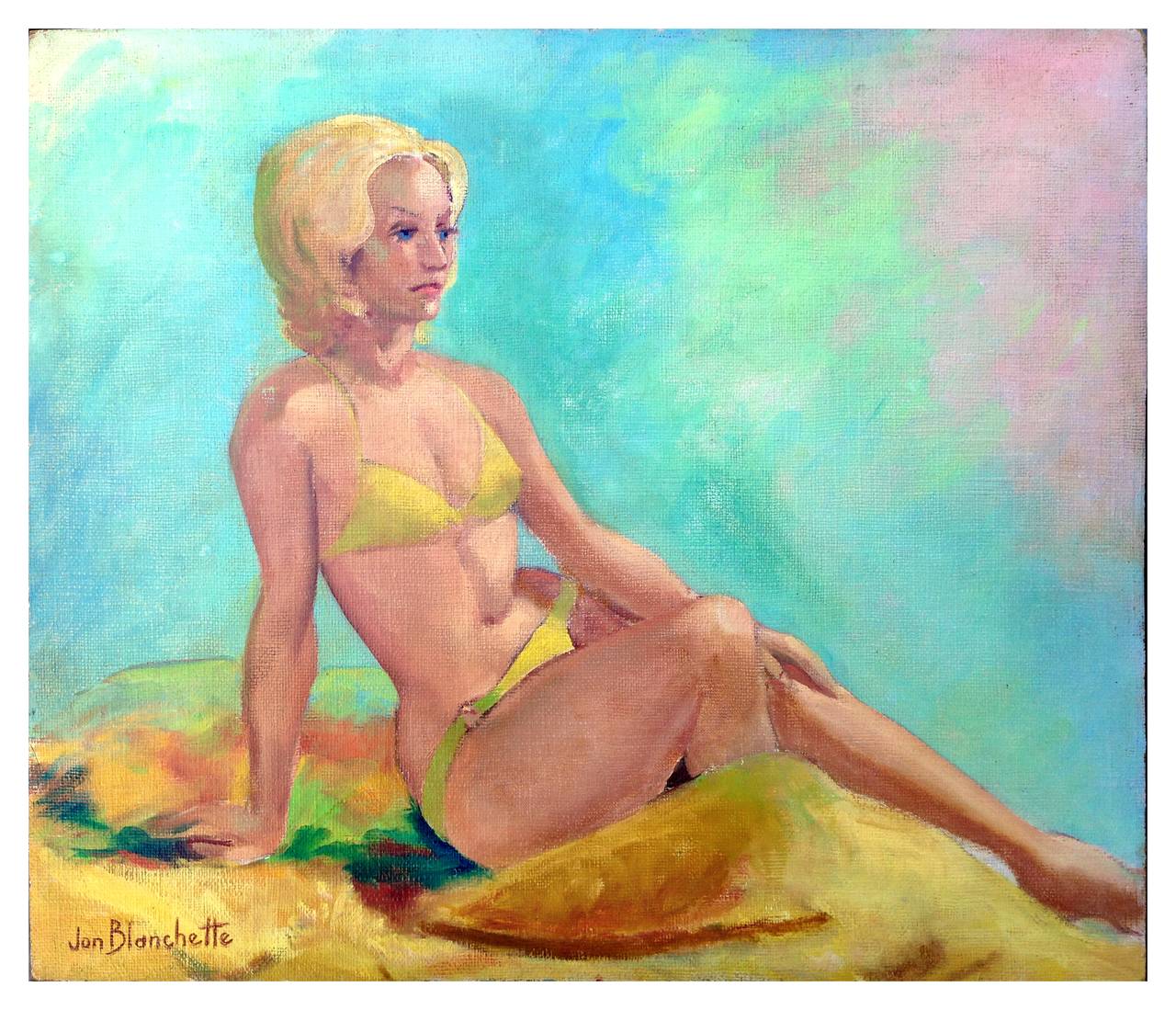 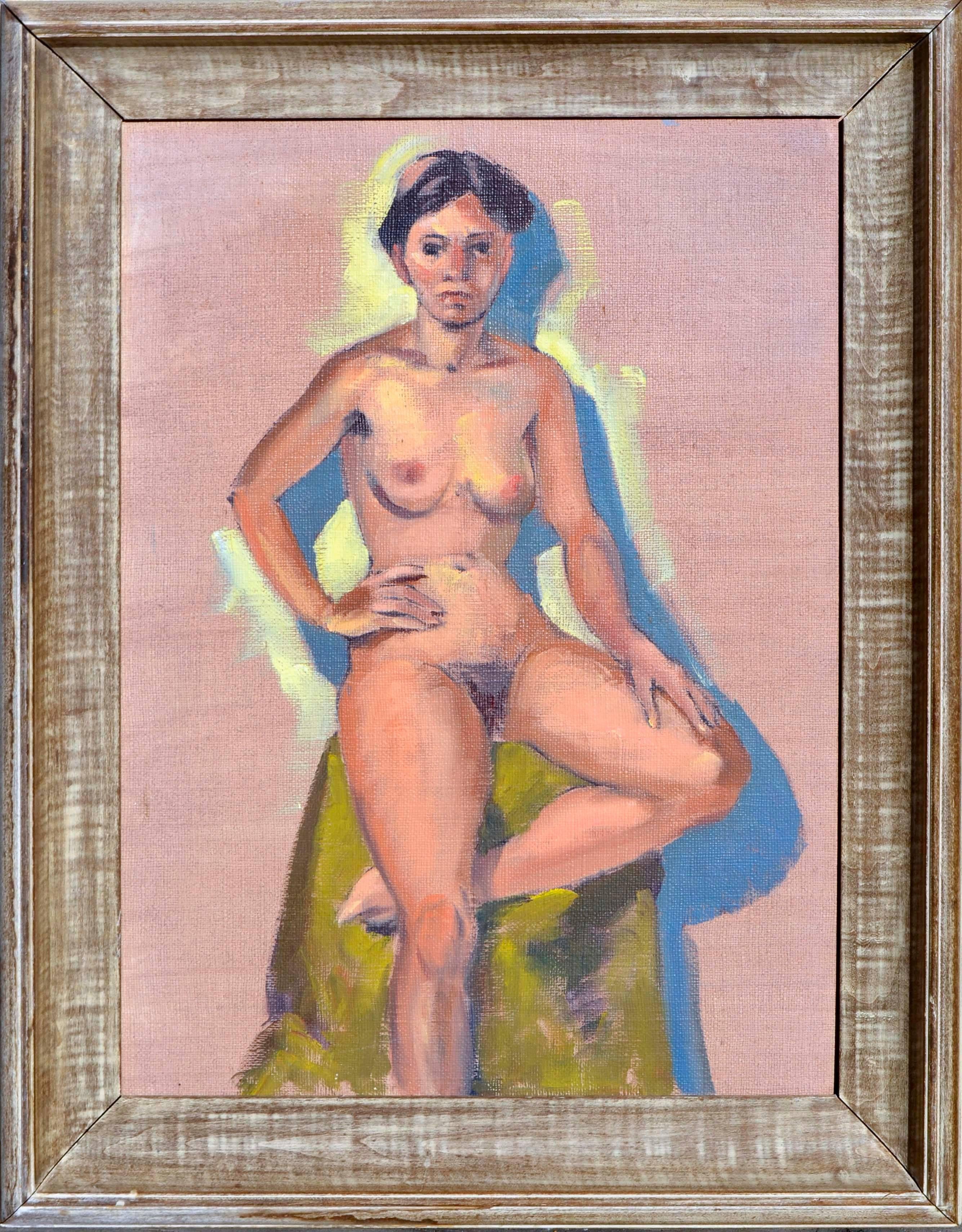 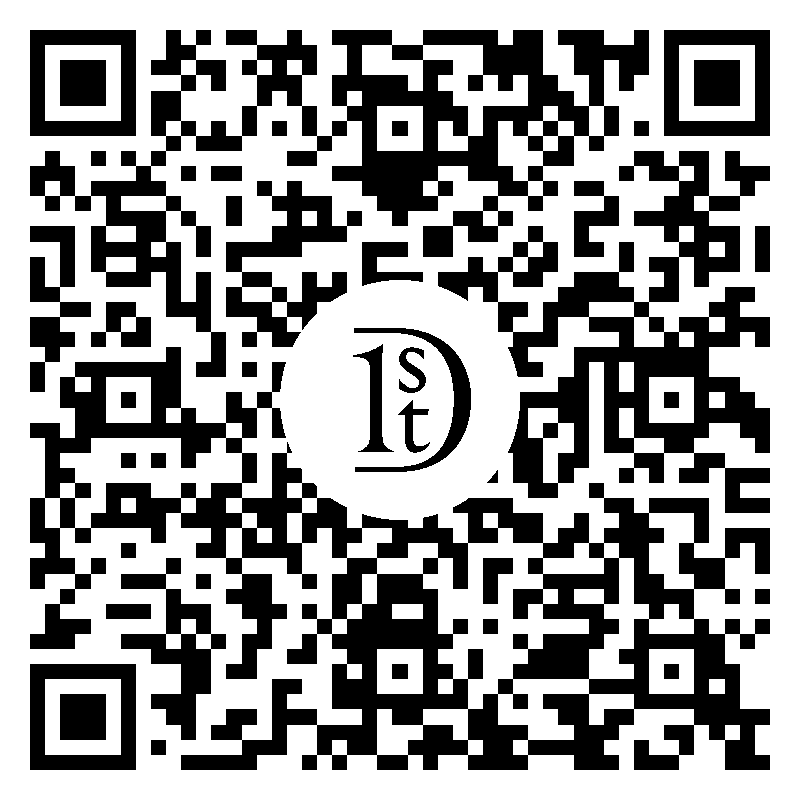 An original oil painting by California artist, Jon Blanchette of a yellow house in East Santa Cruz, Southern California in colors of green, blue, brown, and yellow. Presented in a custom frame, outer dimensions measure 21 ¾ x 25 ¾ x 1 ¼ inches. Image size is 16 x 20 inches. Painting is clean and in very good vintage condition - please contact us for a detailed condition report. Expedited and international shipping is available - please contact us for a quote. Jon Blanchette moved to Southern California in the 1930s and settled permanently in Santa Cruz in the late 1940s. He is best known for his paintings of Southern California including Santa Cruz, Mendocino, Monterrey, Watsonville and Aptos. 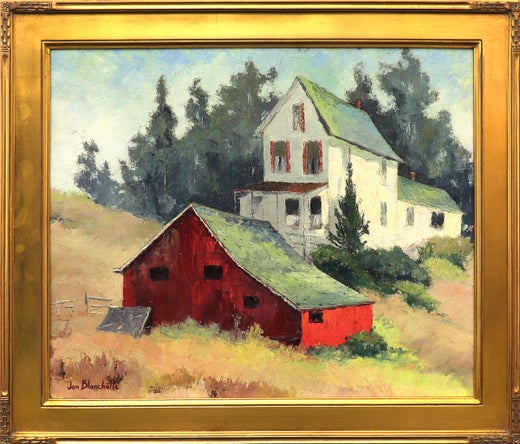 Jon Blanchette was born in Somerset, England, in 1908. He immigrated to Battle Creek, Michigan, in 1918. Artistically inclined at age six, he later studied at the Pittsburgh Art Institute, where he received his BA. In 1932, Blanchette moved to Los Angeles, where he painted, did the architectural design, interior decorating and stage sets for Fox Studios. In 1948, he settled in Aptos, California, where he painted fine art and taught privately. During the summers of 1965–75, Blanchette held workshops in Mendocino. A romantic realist, he was primarily an oil painter but was also proficient with pen & ink, watercolor, and silkscreen. Blanchette died in Aptos in 1987. He had a membership for the Santa Cruz Art League and Marin County Artists. Blanchette exhibited at Santa Cruz Women's Club, 1959, and stood first in the Santa Cruz County Art Competition, Aptos Art Center, 1965.

View All
Capitola, California, 1950s Framed California Seascape Marine Oil Painting
By Jon Blanchette
Located in Denver, CO
Capitola (California) is an oil on board painting by Jon Blanchette (1908-1987) circa 1955. Marine seascape painting with crashing waves and buildings along the coast painted in shad...
Category

$1,000 Sale Price
25% Off
Mid Century Portrait of Woman in Red Hat
By Jon Blanchette
Located in Soquel, CA
Mid Century portrait of a woman wearing red by Jon Blanchette (American, 1908-1987). Signed by the artist in the lower right corner. Canvas has been mounted on fiberboard. Unframed. ...
Category