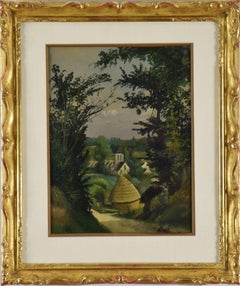 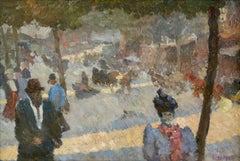 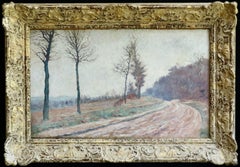 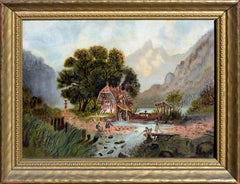 Malott - In the Heartland Landscape with Unicorn 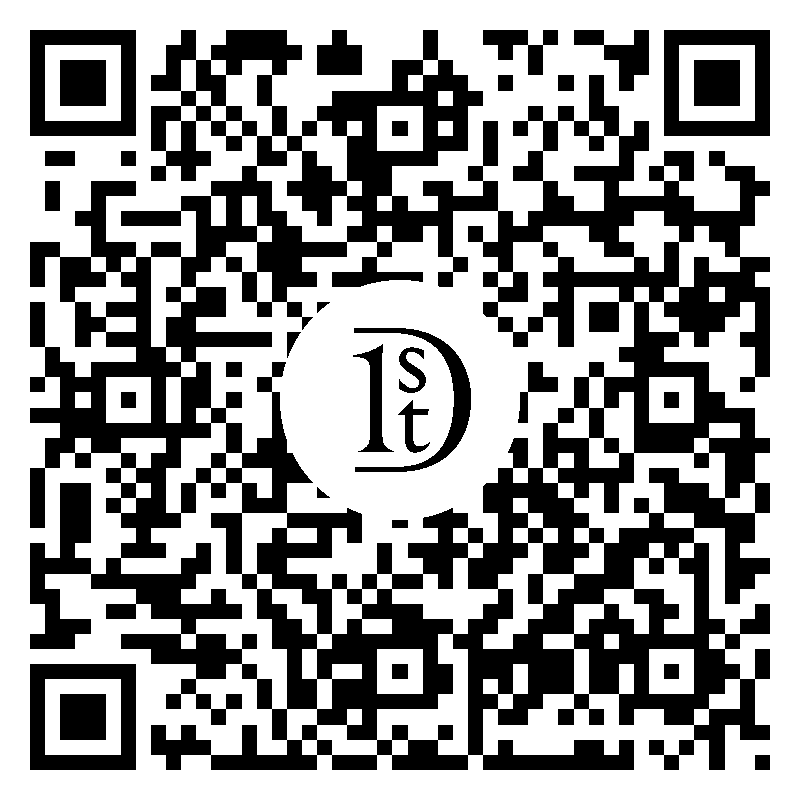 A wonderful oil on canvas by Louis Hayet depicting figures in a cityscape at evening time. Signed and dated 1932 lower left. Louis Hayet had a difficult and itinerant childhood, due to the instability of his father, an amateur artist. He began to draw and produce watercolours from the age of 12. By the age of 20 he produced works with great skill, as demonstrated by his pen drawing Boulevard, Evening, Paris. He made a living in Paris doing various jobs more or less to do with painting. He associated with Camille and Lucien Pissaro, met Seurat and Signac, the poet Paul Fort and Lugné-Poë, founder of the Théâtre de l'Œuvre, for whom he painted several stage sets. He travelled to Algeria. His rare exhibitions, the last in 1904, met with little response. From 1905 to 1929 he lived in La Frette and continued to travel and paint in Brittany, Rheims and Paris. His artistic activity slowed down after 1929, and he wrote an semi-autobiographical philosophical tale, Kun the Fool (Kun l'Ahuri), and an essay on aesthetics and pictorial method. He fell ill and hardly left his home in Cormeilles-en-Parisis until his death. Jean Sutter, his biographer, estimates Hayet's output at around 400-500 paintings and 300-350 drawings, pastels, watercolours and gouaches. Today his lack of success during his lifetime seems extraordinary. His paintings from 1888 to 1890 are of pure Neo-Impressionist construction, as seen in Place de la Concorde, Grain Market, Café. In 2003 his work featured at the collective thematic exhibition Between Heaven and Earth: Camille Pissarro and the Painters of the Oise Valley (Entre ciel et terre, Camille Pissaro et les peintres de la vallée de l'Oise) at the Musée Tavet-Delacour in Pontoise.

Louis Hayet was born to a modest family in Pontoise, near Paris, and despite early evidence of considerable artistic and academic talents, he began his career as a travelling salesman.

Eventually joining with the Neo-Impressionist group of painters centred upon Camille Pissarro, Paul Signac and Georges Seurat, Hayet’s inherent predisposition for painting revealed itself as he experimented with colour, texture and light. Hayet established a friendship with Camille Pissarro, and Pissarro’s eldest son Lucien, a year after moving to Paris in 1885.

Curiously, Paul Signac removed mention of Hayet from the Pointillism manifesto. Yet, from his studios at Montmartre and La Frette, Hayet was a prolific artist who produced a diverse body of work that always sought to be true to the nature of colour itself.

Bearing the influence of Seurat, Hayet would often work en plein air with a fast-moving, decided technique that foreshadowed the evolution from Impressionism to Neo-Impressionism. He was drawn to themes such as the circus, modern urban scenes and landscapes.

The science-based principles of Neo-Impressionism followed Hayet to the end of his painting career, after which he dedicated his time to scientific research into pigments.

5 / 5
Our team of world-class specialists approve every seller on 1stdibs.
This distinction is for experienced sellers who continually surpass customer expectations.
1stdibs seller since 2016
Typical response time: 1 hour
Located in Flackwell Heath, GB

$900 Sale Price
30% Off
In the Heartland Landscape with Unicorn
Located in Soquel, CA
Category

Malott
In the Heartland Landscape with Unicorn , 1982