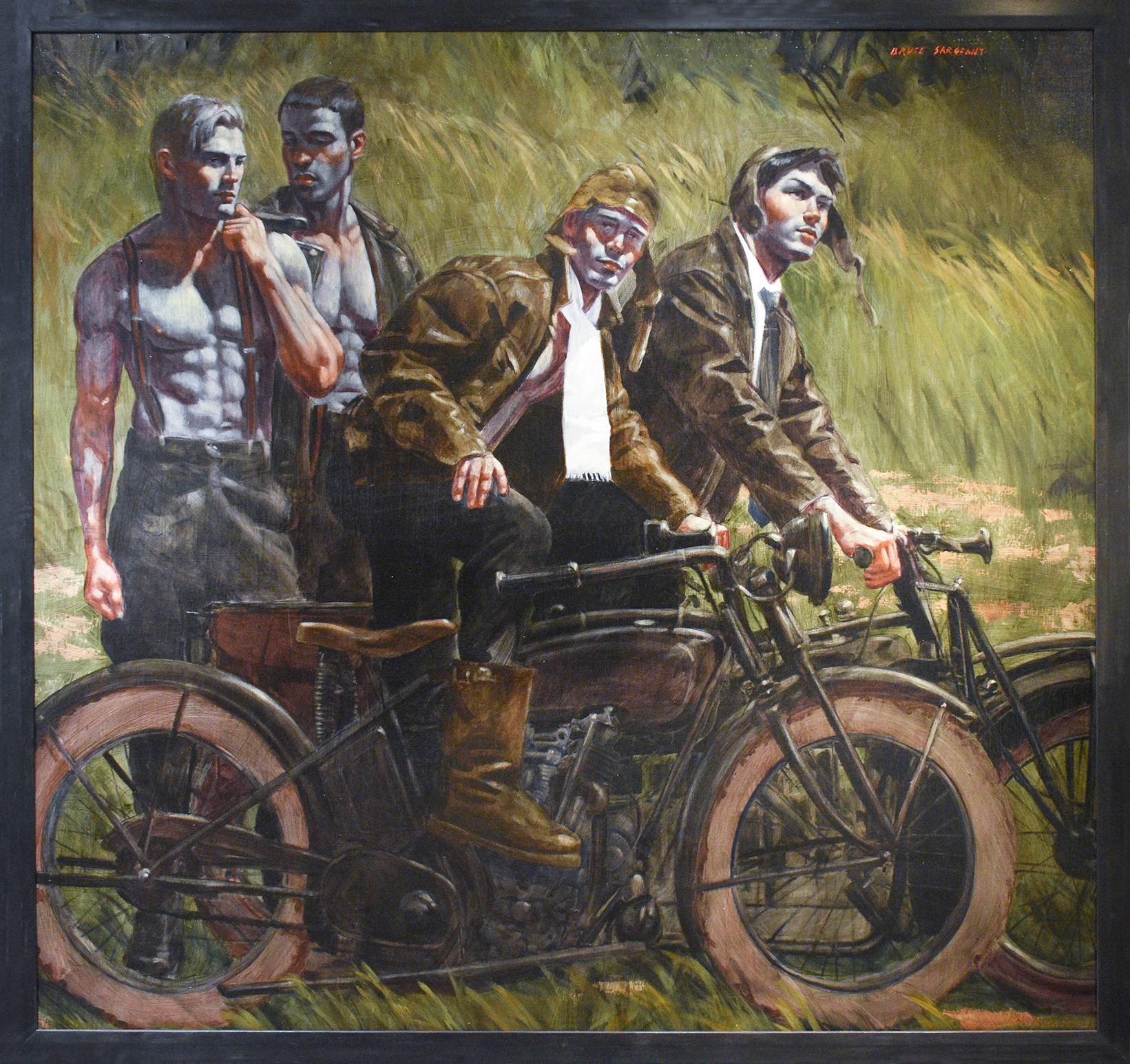 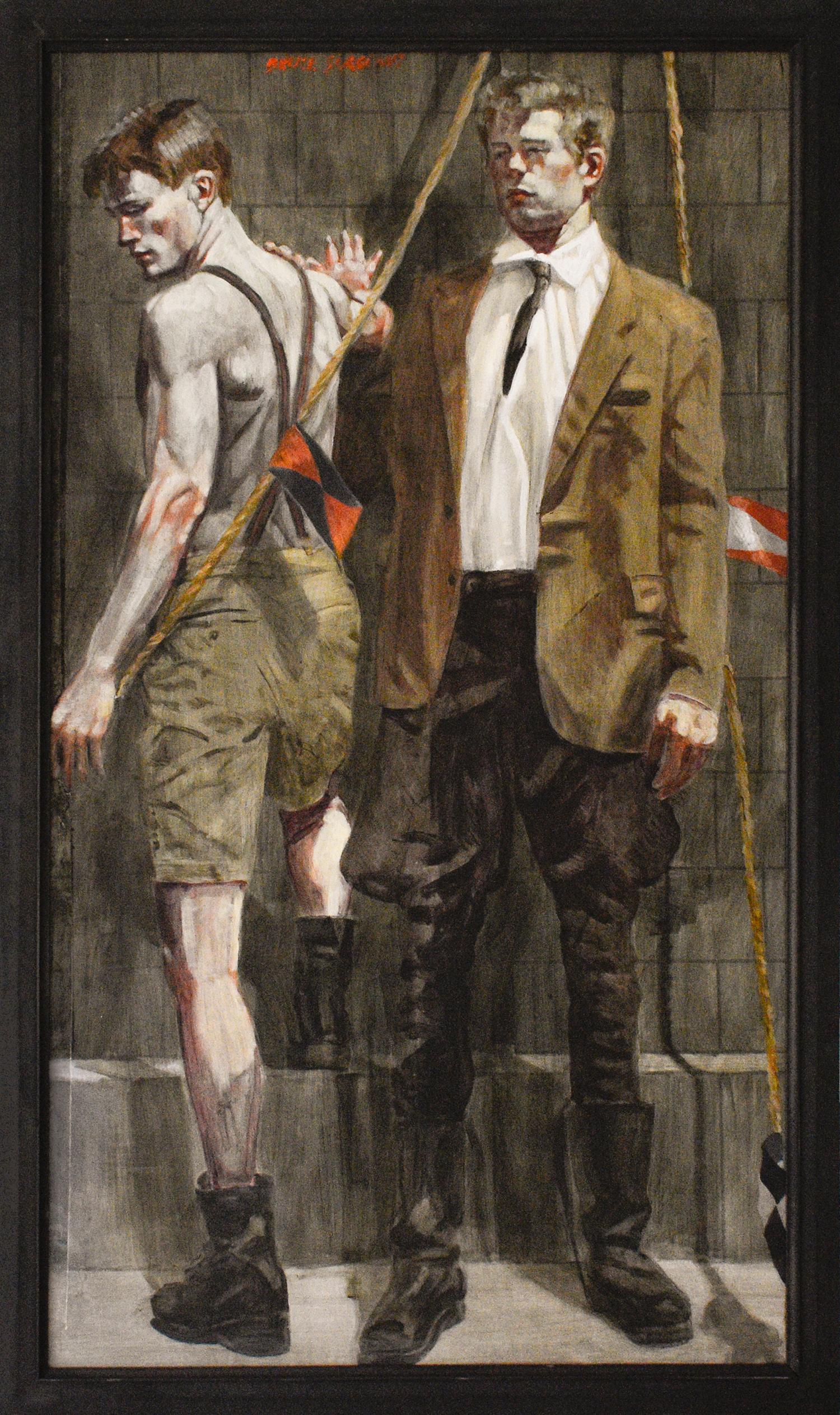 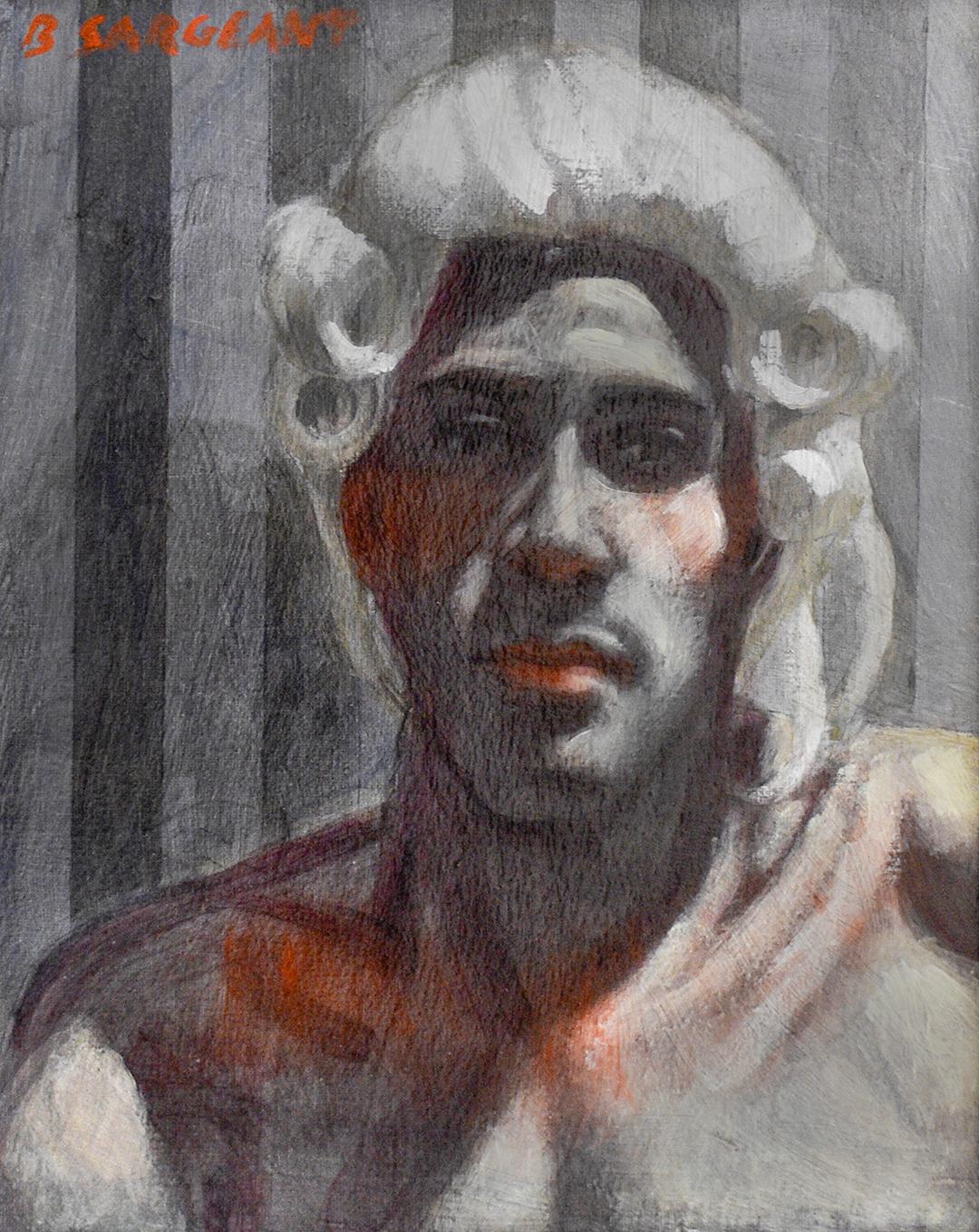 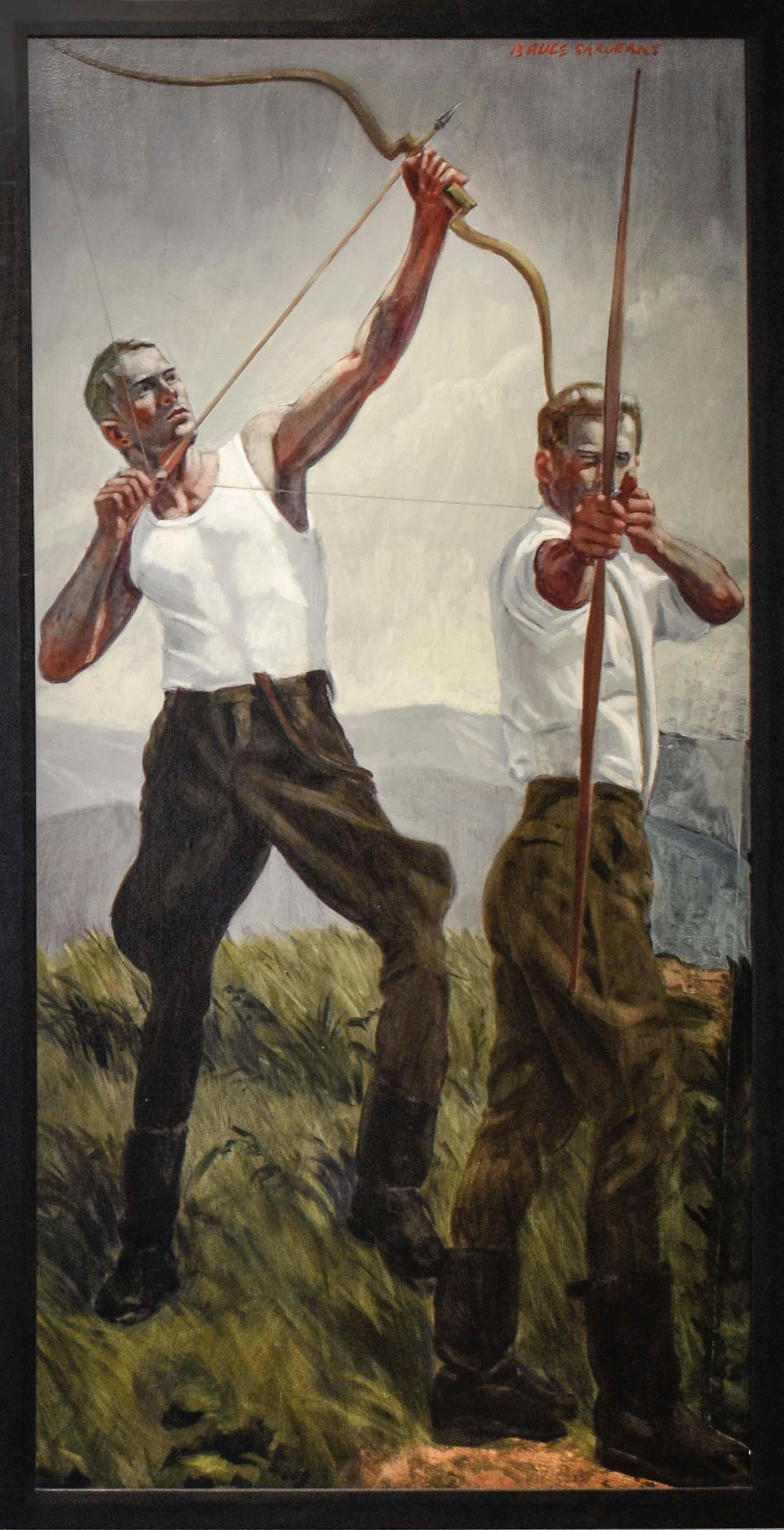 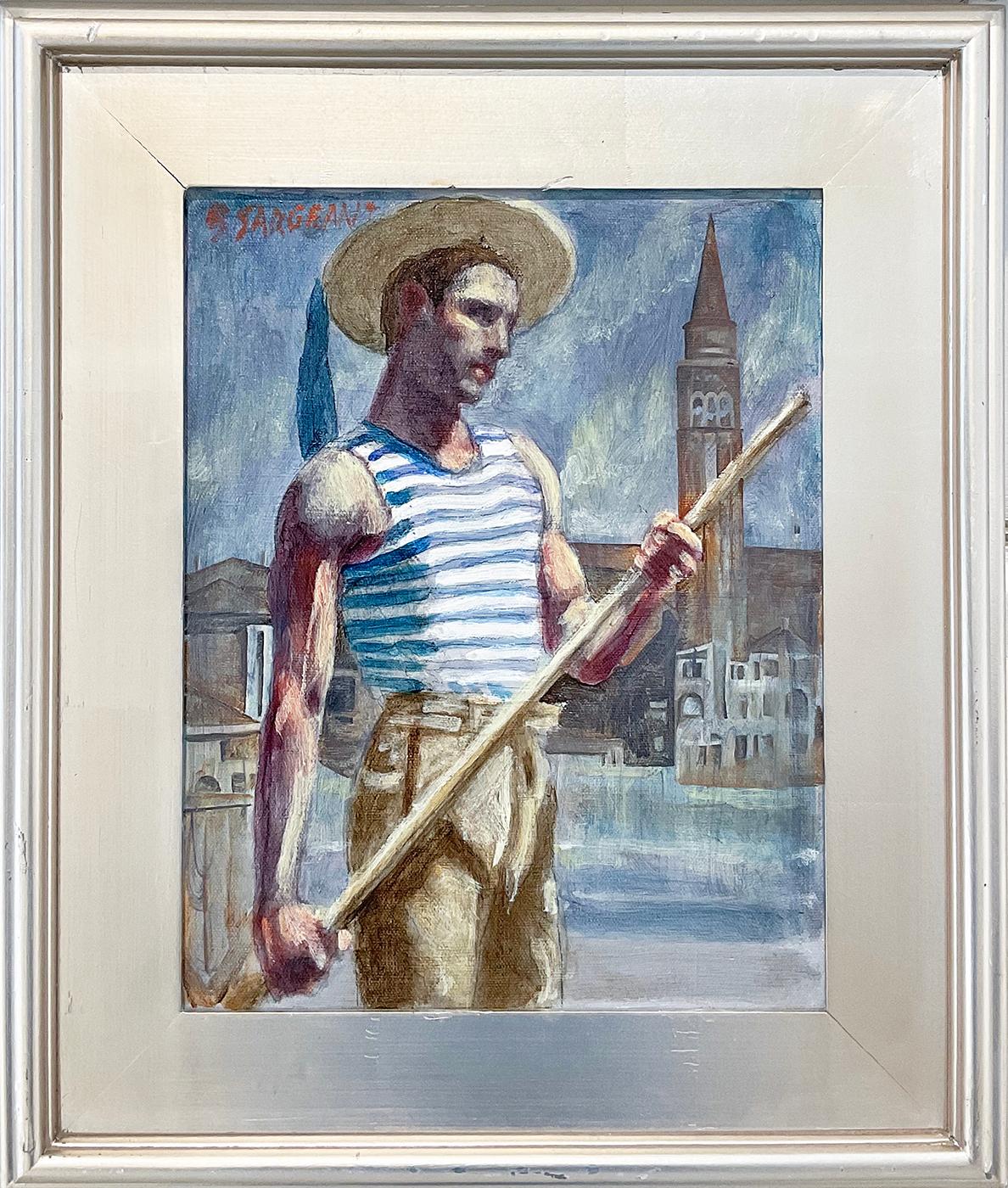 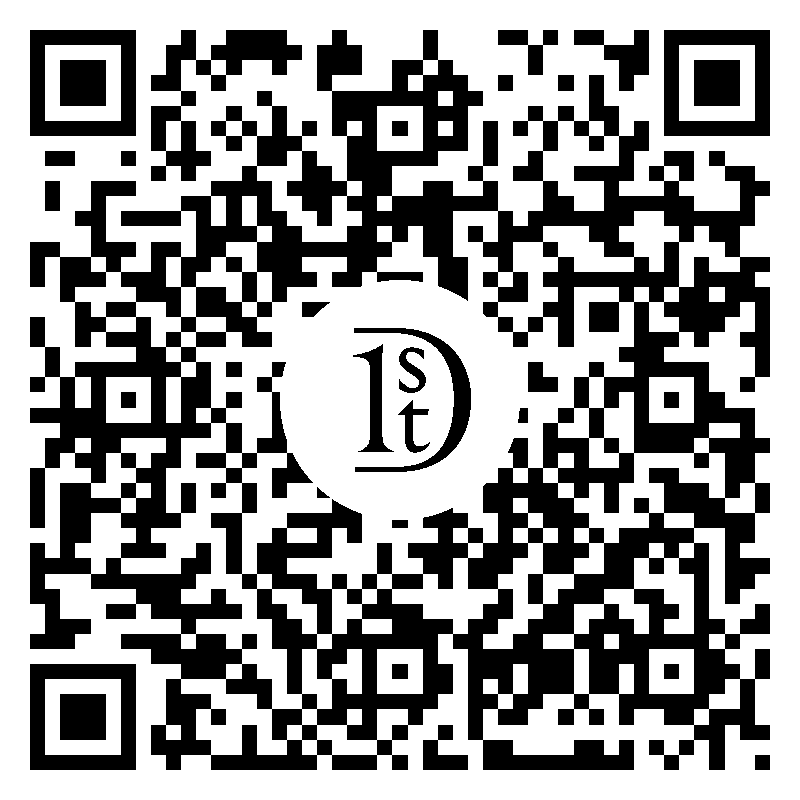 Academic style figurative painting of four young athletes running and on bicycles "Frieze with Two Men on Bikes", painted by Mark Beard as Bruce Sargeant (pseudonym in homage to the fashion photographer, Bruce Weber, and figurative painter, John Singer Sargeant) Oil on canvas, signed upper right 35.5 x 60 inches, 40.5 x 65.5 inches in a black frame with wire backing Excellent condition, ready to hang as is This magnificent horizontal composition was painted by Mark Beard under his fictitious artistic persona, Bruce Sargeant. Painted in a modern Academic style, this dynamic portrayal of young, male athletes in motion is an exciting example of the artist's talent for painting human anatomy. Two men are mounted on bikes; one wears khaki shorts and a billowing, white oxford shirt; the other is topless in a pair of white shorts. Two men are poised mid-stride in front of the bikes. The figures' toned muscles are accentuated with deep shadows that contrast against their cool, statuesque skin tone. The cheeks, forearms, legs, and hands are blushed pink, further sensualizing their figures. Painted in a style that evokes the portraits of John Singer Sargent, Mark Beard is a living artist who paints under the pseudonym "Bruce Sargeant". Over a decade ago, Mark Beard was tasked with commissioning one of the world’s largest murals, not once, but six times over in six locations for the Ohio based retailer, Abercrombie and Fitch. Beard was chosen for his idealization of ‘perfect manhood’ as depicted in the arenas of both athleticism and demeanor. Beard’s signature “bravura” style of brushwork references his main hero, John Singer Sargent, while the artist also cites Thomas Eatkins and Diego Velazquez as influences. This critical juxtaposition of his paintings with pop culture fashion in the cities of New York, Los Angeles, Milan, London, Tokyo and Paris gained Beard new recognition in a career that largely began in set design for European theater and opera. “The Abercrombie & Fitch commissions are an especially ingenious use of his talent, as Mark paints in a style of the 1920s and ‘30s we were once quite familiar with – look at the lobbies in Rockefeller Center – where humble humanity is shown in a heroic scale,” said Ashton Hawkins to the Baltimore Sun, a lawyer and board member of the MET in NYC. “Yet, Mark makes it palatable to the modern sensibility, because there’s a sly element of camp to it.” Mark Beard was born in Salt Lake City, Utah and studied art at the University of Utah and drawing at the Grand Chaumiere in Paris, France. He currently divides his time between Paris and New York City, where he has lived since 1980 and keeps a loft and studio in Hell’s Kitchen. About the artist: Mark Beard is perhaps the most literal example of an artist pulled in so many different directions that he chose to “invent” six different personae in which to channel his overflowing energy and need for expression. Each painting style is radically different from the next, so it remains entirely believable that the work could stem from six completely different people of different time periods and different schools of thought. With a background in set design, Beard has always been one who could conjure total magic with anything available. For this exhibit, he returns as the beloved 20th century painter from England, Bruce Sargeant, featuring a parade of Arcadian scenes suggesting afternoons of young men sporting in the countryside, rowing, bicycling, hunting or wrestling. Clean shaven, well manicured youths pose casually, indulging every opportunity to display a titillating flex of stone-like musculature. Like modern Greek statues, Beard paints these prestigious figures oftentimes in pairs of twos and threes in a lazy state of beautiful passivity. Mark Beard keeps himself fresh with challenge, undertaking ambitious commissions and committing to weekly sketch sessions with live models in his Manhattan studio. The result of this dedicated practice is a stunning array of graphite and conte crayon drawings on Arches paper. Beard's works are in museum collections worldwide, including the Metropolitan Museum of Art, New York City; the Museum of Modern Art, New York City; the Whitney Museum of American Art, New York City; the Boston Museum of Fine Arts; and the Harvard, Yale, and Princeton University Art Museums; among many others. We would not be the least bit surprised to see new ‘personas’ emerge in the coming years. 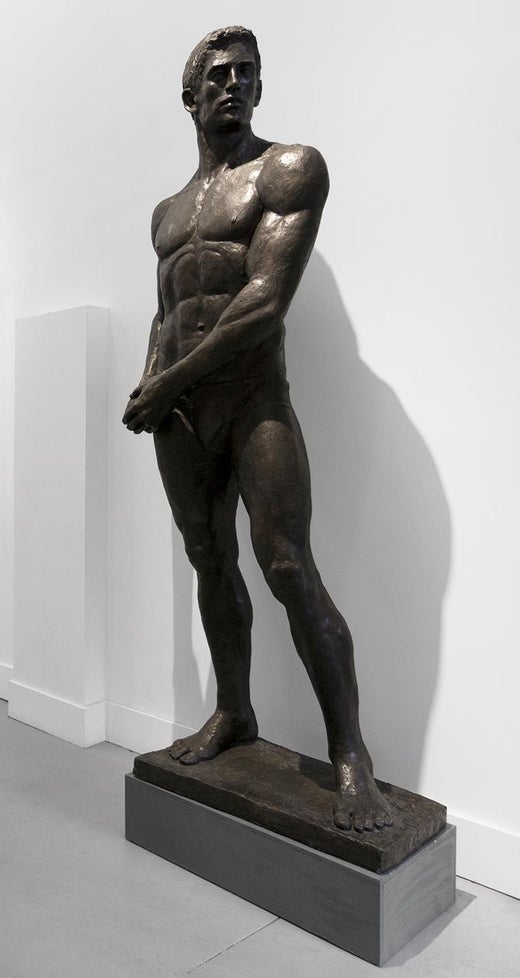 About the Seller
5.0
Located in Hudson, NY
Platinum Seller
These expertly vetted sellers are 1stDibs' most experienced sellers and are rated highest by our customers.
Established in 1991
1stDibs seller since 2013
469 sales on 1stDibs
Typical response time: 2 hours
More From This Seller