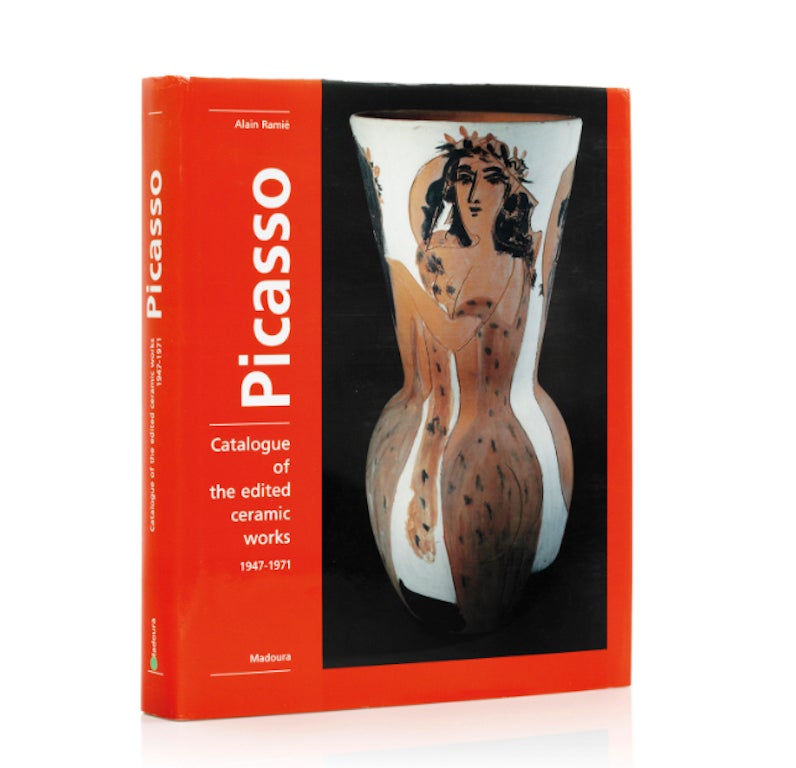 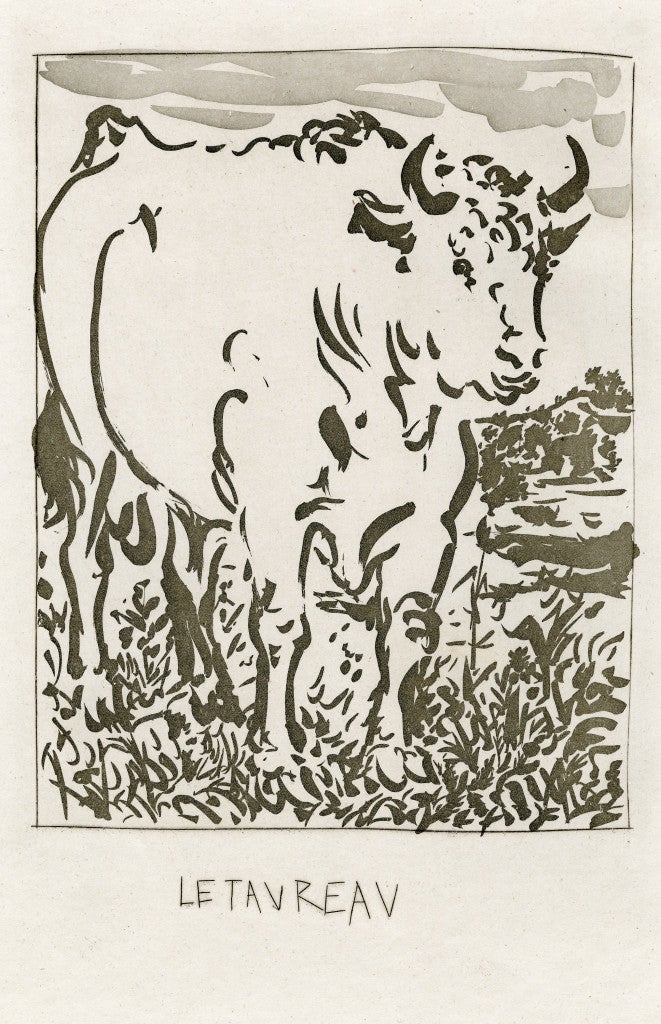 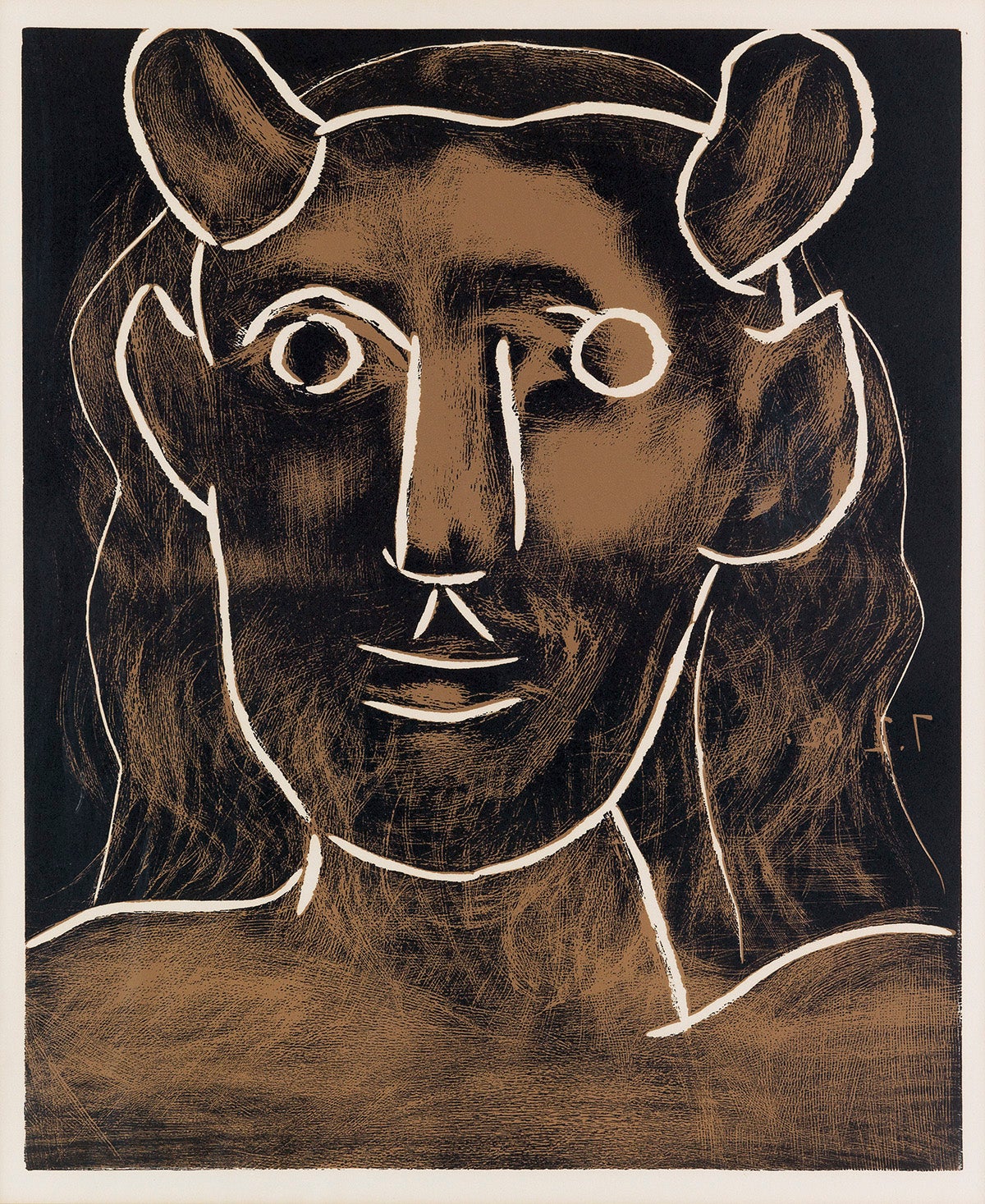 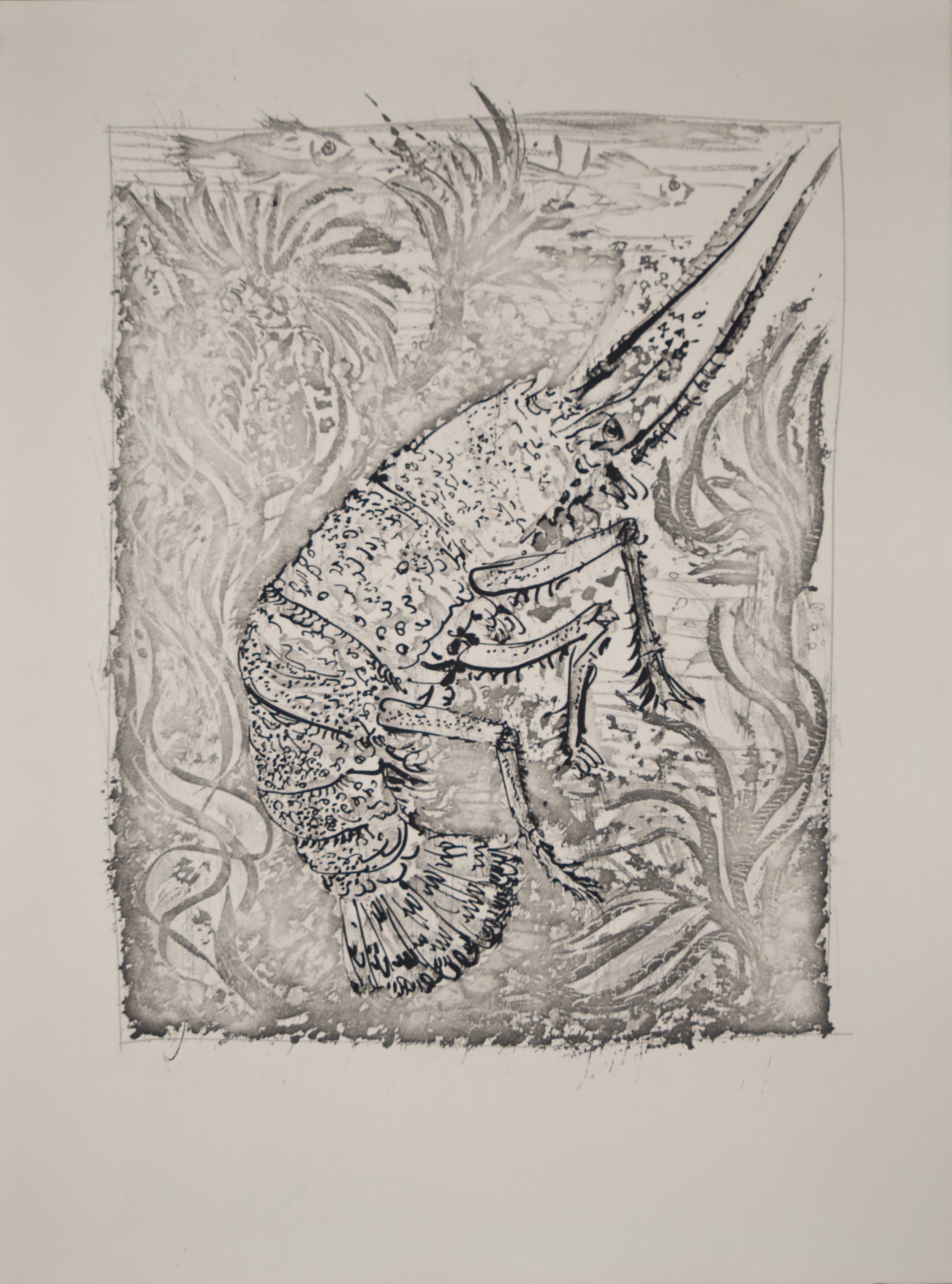 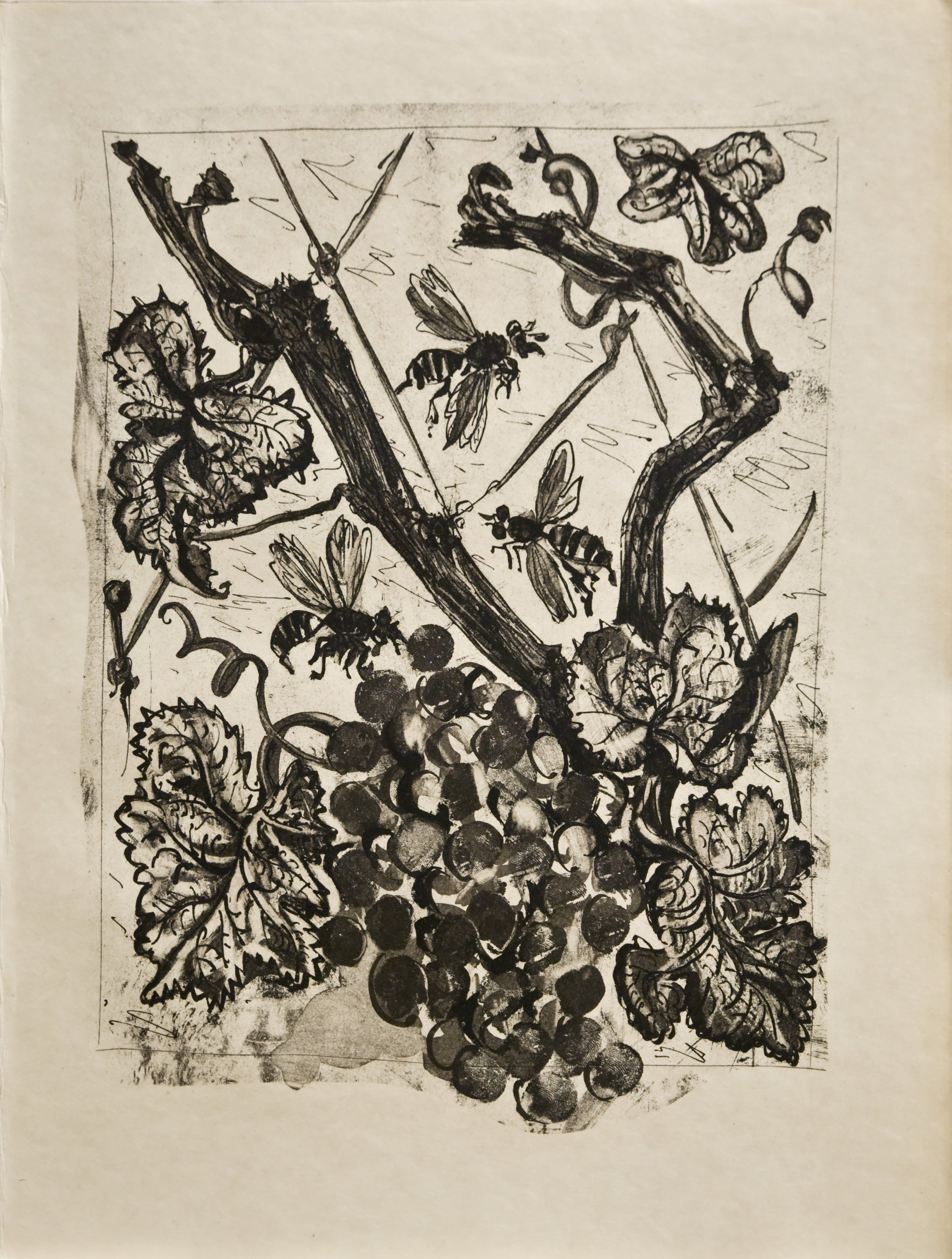 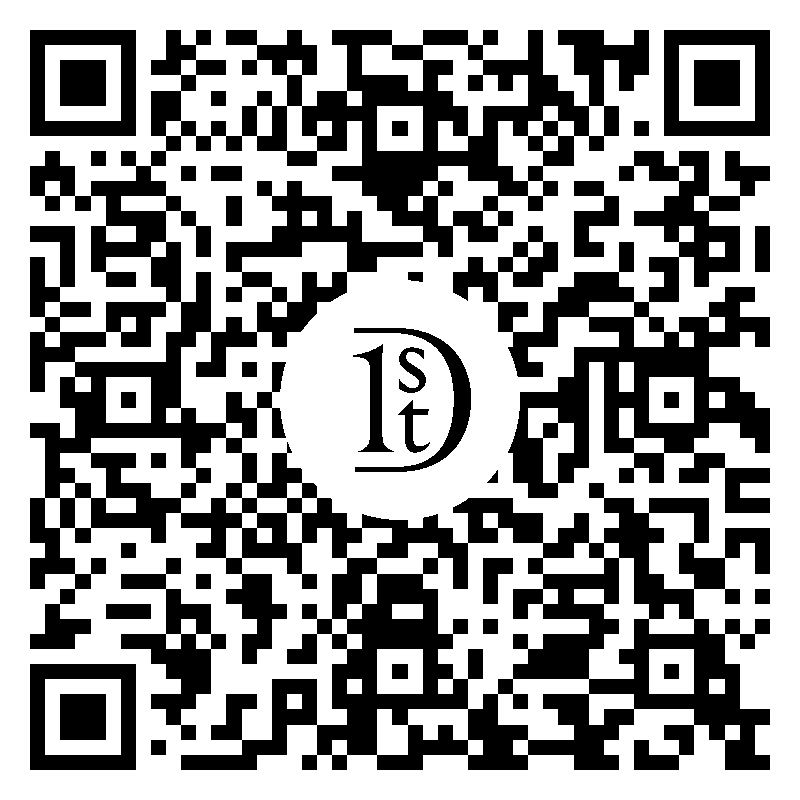 An original signed linocut on Arches deckle edged heavy wove paper by Spanish artist Pablo Picasso (1881-1973) titled "Toros en Vallauris", 1959. Hand pencil signed by Picasso lower right and numbered lower left. Limited edition: 18/190. Printed by Hidalgo Arnéra, Vallauris, France. Arches block watermark left center margin. Reference: Bloch No. 1287; Baer No. 1218. Provenance: private collection - Bruce Schwartz - Jacksonville, Florida acquired from Graves International Art in the 1980's. Sheet size: 30" x 22". Image size: 25.75" x 21". Some light creasing to top corners. Toning to paper and a few foxing spots associated with age. In otherwise generally good condition. Rare. Pablo Picasso was born on October 25, 1881, in Málaga, Spain. The son of an academic painter, José Ruiz Blasco, he began to draw at an early age. In 1895 the family moved to Barcelona, and Picasso studied there at La Lonja, the academy of fine arts. His visit to Horta de Ebro from 1898 to 1899 and his association with the group at the café Els Quatre Gats in about 1899 were crucial to his early artistic development. Picasso’s first exhibition took place in Barcelona in 1900, and that fall he went to Paris for the first of several stays during the early years of the century. Picasso settled in Paris in April 1904, and his circle of friends soon included Guillaume Apollinaire, Max Jacob, Gertrude and Leo Stein, as well as two dealers, Ambroise Vollard and Berthe Weill. His style developed from the Blue Period (1901–04) to the Rose Period (1905) to the pivotal work Les Demoiselles d’Avignon (1907), and the subsequent evolution of Cubism from an Analytic phase (ca. 1908–11) to its Synthetic phase (beginning in 1912–13). Picasso’s collaboration on ballet and theatrical productions began in 1916. Soon thereafter, his work was characterized by neoclassicism and a renewed interest in drawing and figural representation. In the 1920s the artist and his wife, Olga (whom he had married in 1918), continued to live in Paris, to travel frequently, and to spend their summers at the beach. From 1925 to the 1930s Picasso was involved to a certain degree with the Surrealists, and from the fall of 1931 he was especially interested in making sculpture. In 1932, with large exhibitions at the Galeries Georges Petit, Paris, and the Kunsthaus Zürich, and the publication of the first volume of Christian Zervos’s catalogue raisonné, Picasso’s fame increased markedly. By 1936 the Spanish Civil War had profoundly affected Picasso, the expression of which culminated in his painting Guernica (1937, Museo Nacional Centro de Arte Reina Sofía, Madrid). Picasso’s association with the Communist Party began in 1944. From the late 1940s he lived in the south of France. Among the enormous number of exhibitions that were held during the artist’s lifetime, those at the Museum of Modern Art, New York, in 1939 and the Musée des Arts Décoratifs, Paris, in 1955 were most significant. In 1961 the artist married Jacqueline Roque, and they moved to Mougins. There Picasso continued his prolific work in painting, drawing, prints, ceramics, and sculpture until his death on April 8, 1973.


Browse an expansive collection of Pablo Picasso's art on 1stDibs. 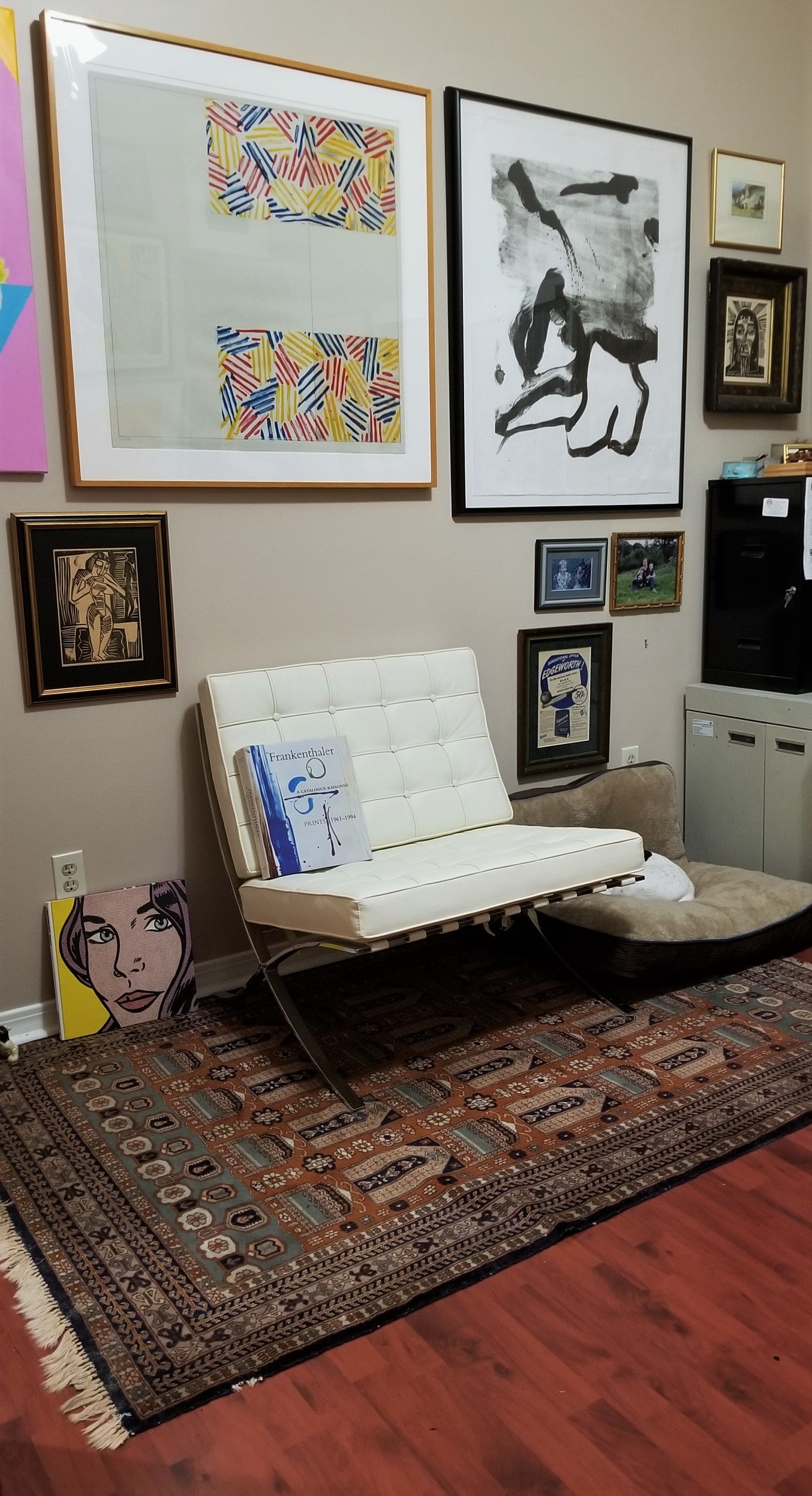 About the Seller
5 / 5
Located in Saint Augustine, FL
Platinum Seller
These expertly vetted sellers are 1stDibs' most experienced sellers and are rated highest by our customers.
Established in 1978
1stDibs seller since 2015
825 sales on 1stDibs
Typical response time: <1 hour
More From This Seller
View All From Seller

Alain Ramie's Picasso Catalogue of the Edited Ceramic Works 1947-1971. Madoura
By Pablo Picasso
Located in New York, NY
This is the original Alain Ramie Catalogue of Picasso Ceramics. This book has been out of print for quite some time and is therefore extraordinarily rare and hard to find. This parti...
Category

$12,000
Tête de Faune
By Pablo Picasso
Located in New York, NY
Scarce artist's proof, aside from the edition of 60 numbered impressions. This is from the collection of Picasso's granddaughter, Marina Picasso, with her collection ink stamp on th...
Category