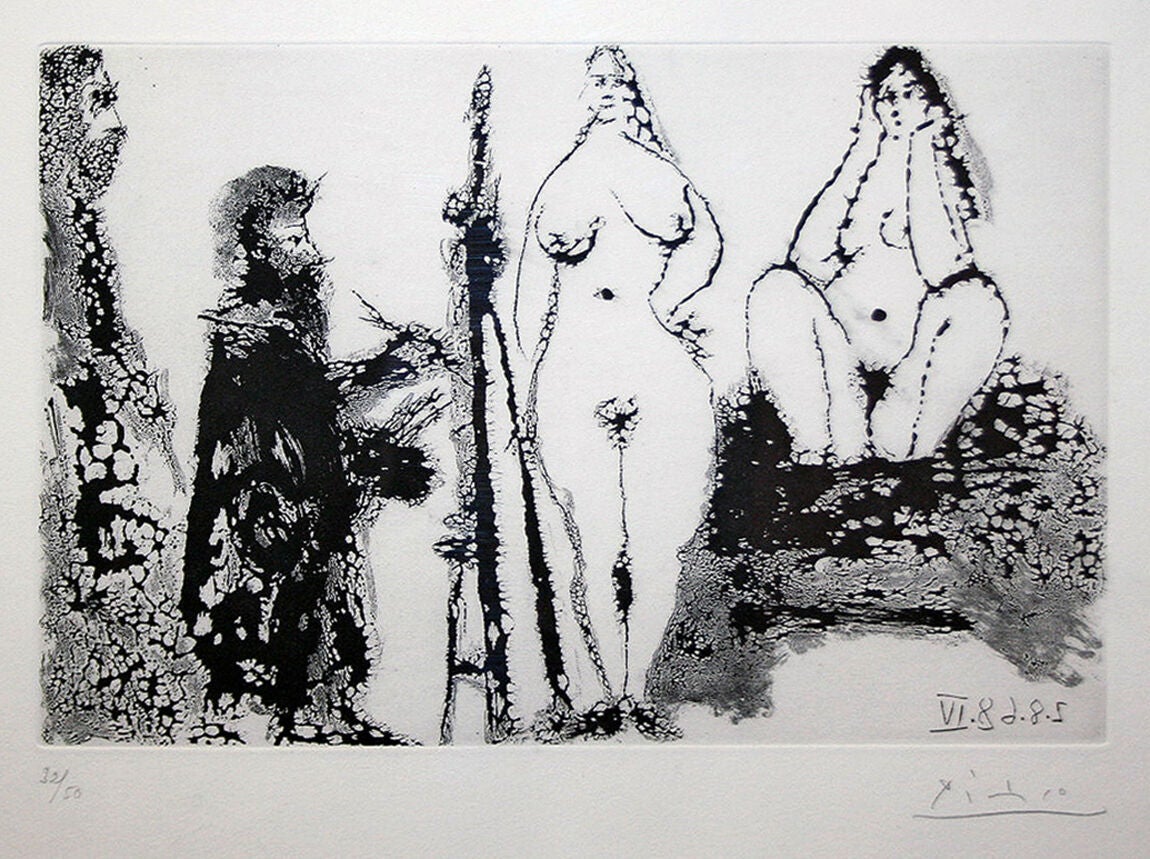 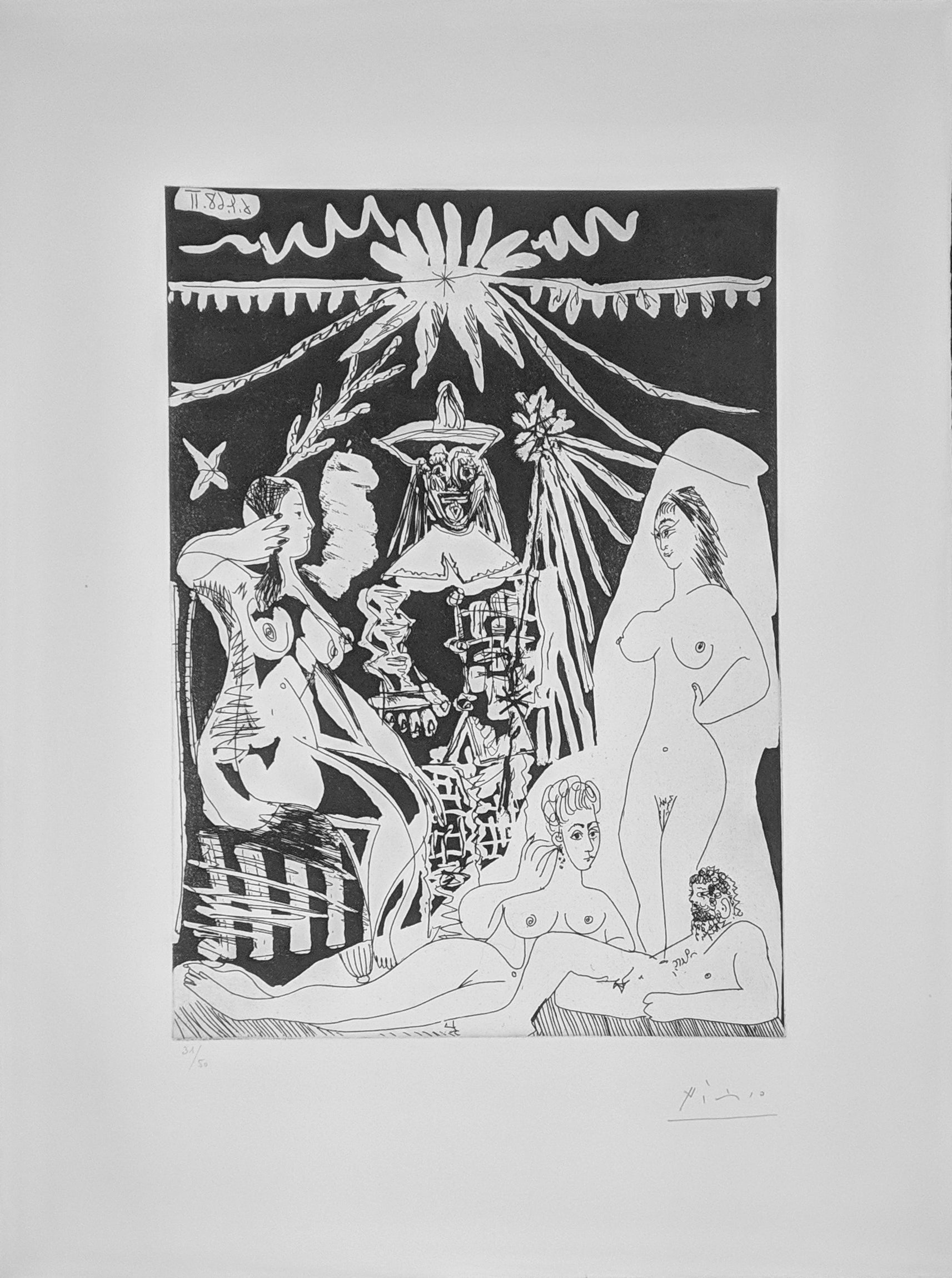 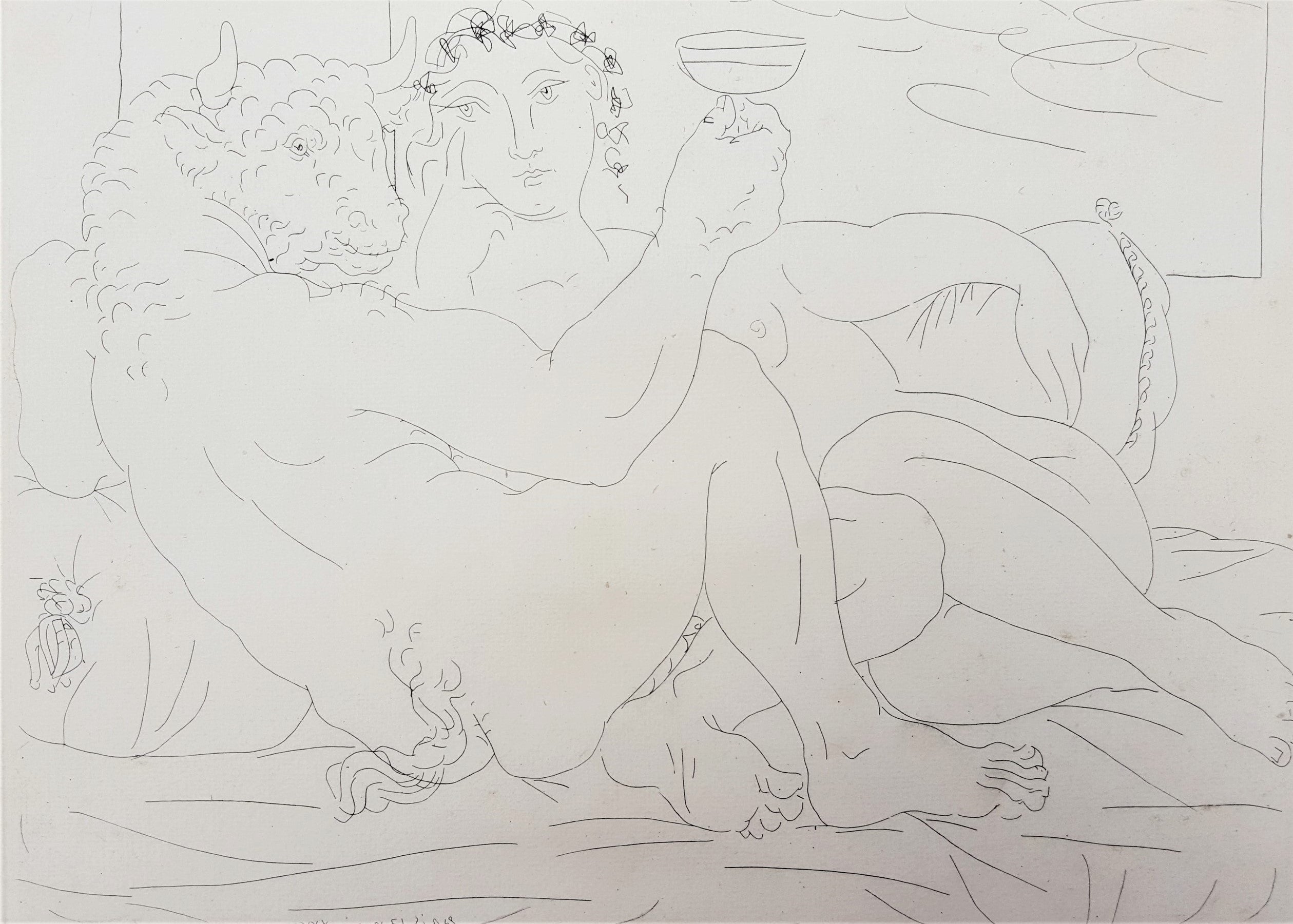 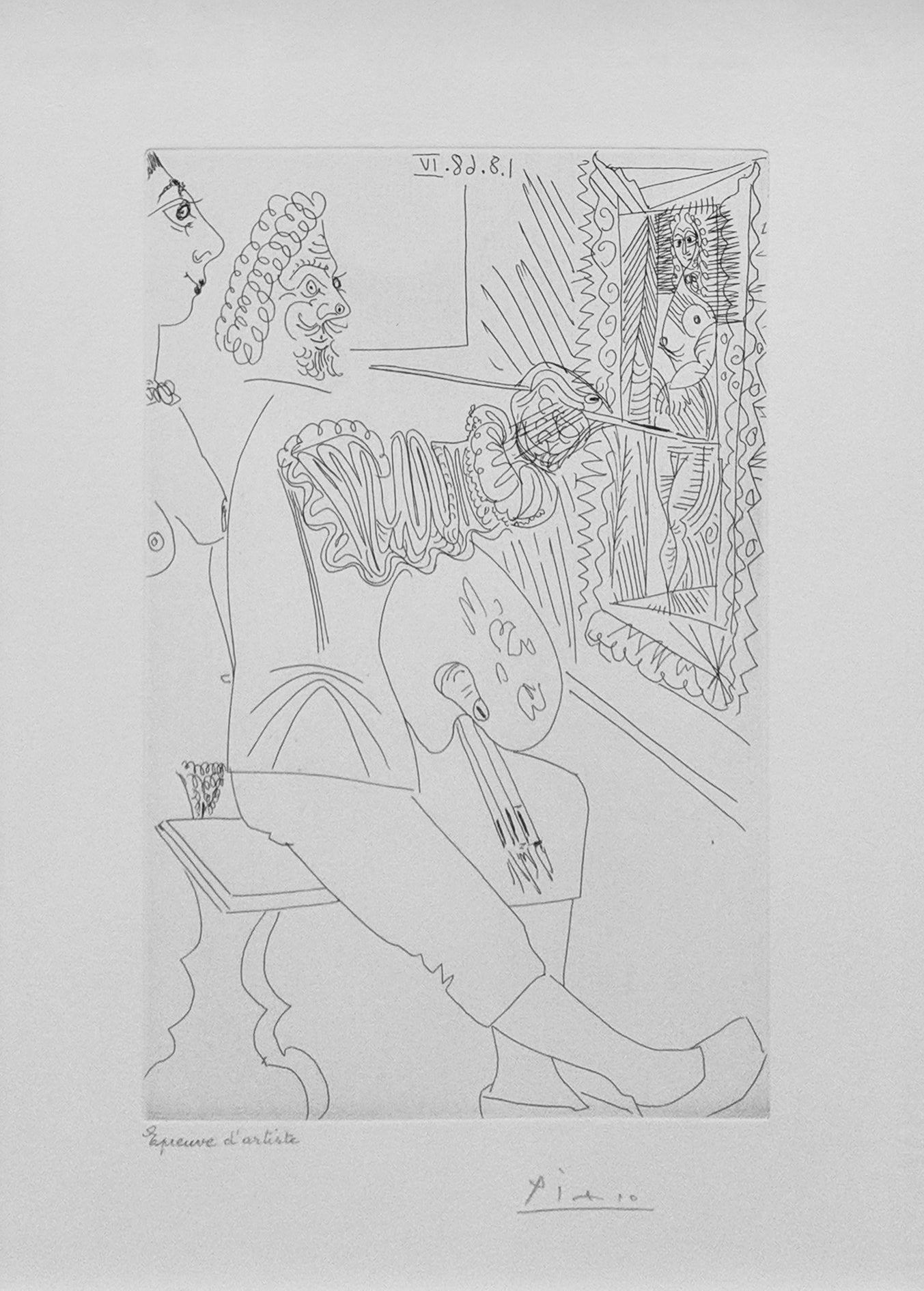 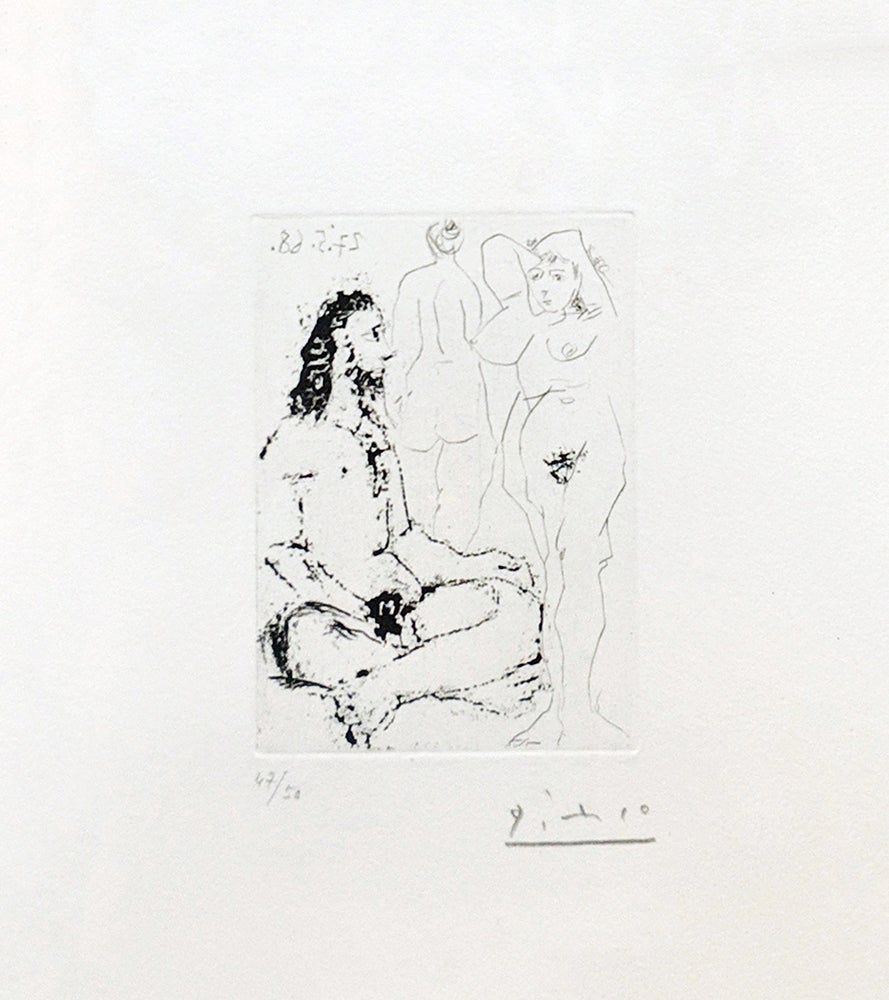 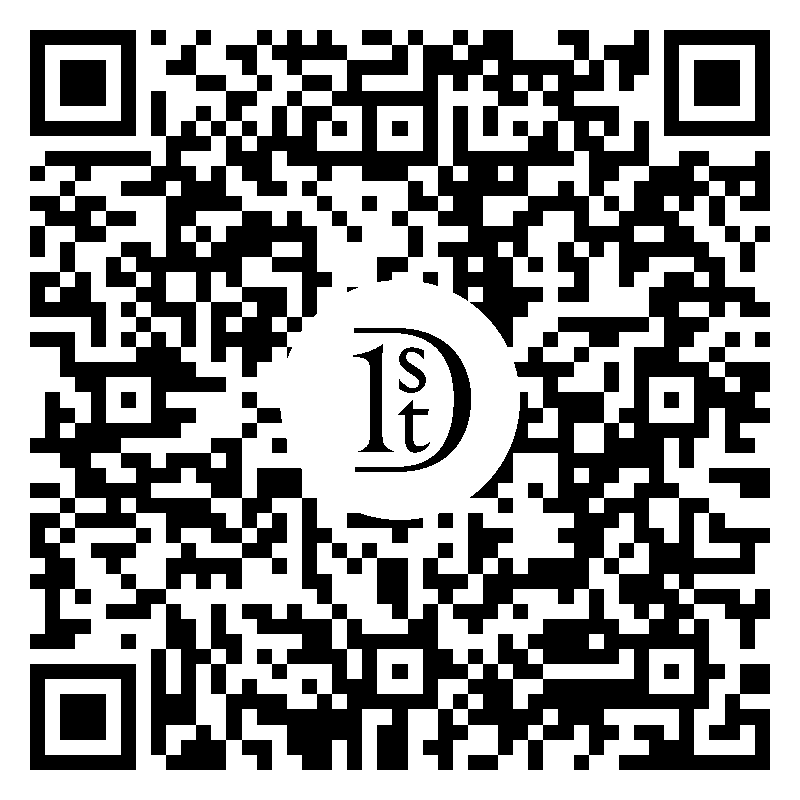 Pablo Picasso Authentic & Original Hand Signed Etching, Professionally Custom framed and listed with the Submit Best Offer option Accepting Offers Now: Up for sale here we have a Pablo Picasso Etching with Aquatint on wove paper titled "Homme et Femme". Additionally, the piece has been elaborately custom framed, as shown, in an expensive, wood moulding to enhance the spectacular imagery. So name your price now through the SUBMIT BEST OFFER option. At this incredible value, the item will not be around long and it shall sell to the first person that meets our bottom line. You do not want to miss this authentic work by the father of Cubism, Pablo Picasso. Pablo Picasso (1881-1973)- As the single most influential artist of the twentieth century, Pablo Picasso's impact on the art world is impossible to overstate. Picasso's influence has changed and defined the entire realm of modern art and is still as culturally and artistically important today as when it was first produced. After showing an early affinity towards art, Picasso began receiving formal art training at the young age of 12 from his father in figurative drawing. By the time Picasso was 13; his father realized that the young artist's skill had surpassed his own. In Barcelona, Picasso was given an exception to apply to the School of Fine Arts and was admitted as the youngest student in their history. By 1905, he has become a favorite artist of famous American art collector Gertrude Stein who became his most significant patron. In 1905, Gertrude Stein introduced Picasso to the famous painter Georges Braques. Together, Picasso and Braques would create a new art genre called Cubism that showcased multiple perspectives on the same canvas. Cubism would be Picasso's most lasting stylistic innovation and would define the artwork he produced from 1909 through 1912. After his development of Cubism, Picasso's work focused on Classicism and Surrealism which combined with elements of his earlier styles would define the rest of his career. During World War II, Picasso's art career would be placed on hold. He remained in Nazi occupied France even though the regime did not approve of his art. He took up writing as an alternative outlet during this period. The rest of his career featured explorations into new artistic mediums. Picasso became a famed sculptor and printmaker. He was the first artist to incorporate elements of collage and also invented the constructed sculpture. Upon his death he left behind him the most impressive and historically significant resume of any twentieth century. Today, he remains the bestselling and best known artist in the world. SUBMIT BEST OFFER, All OFFERS CONSIDERED: The artwork listed here is a spectacular and high quality etching titled, "Homme et Femme" by the iconic artist, Pablo Picasso. It hand signed and numbered (20 of 50), is referenced by Georges Bloch as #1385 and by Baer #1404 , and was published in 1966 by Galerie Louise Leiris (Paris),. Also this etching is from one of Picasso's best, and most desirable suites ever, as he used his daring vision and unique genius to illustrate exotic portraits in his brilliant cubism style. Finally, the artwork is of impressive craftsmanship and size, measuring approximately 15.25" x 19.75" (archival matted to 12" x 17") and 28" x 32" with the custom frame. Which makes the display even better in person where the exquisite imagery, that is suitable for any decor, comes to life in a brilliant display of modern art. Pablo Picasso's art has been exhibited in major museums around the world, and his works can be found in some of the most prestigious public and private collections worldwide. Now you can add this authentic piece to your as it will be custom packaged to ship domestically or internationally. Therefore, please contact us if you have any questions and SUBMIT YOUR OFFER NOW, this item is likely to sell quickly.

About the Seller
4.9 / 5
Located in Bloomington, MN
Platinum Seller
These expertly vetted sellers are 1stDibs' most experienced sellers and are rated highest by our customers.
Established in 2008
1stDibs seller since 2019
306 sales on 1stDibs
Typical response time: <1 hour
More From This Seller
View All From Seller