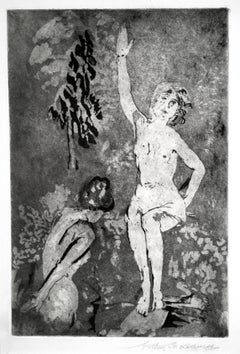 Afternoon
By Arthur B. Davies
Located in New York, NY
Arthur B. Davies (1862-1928), Afternoon, transfer lithograph, 1920, signed in pencil lower left. Reference: Czestochowski 188, only state, from the edition of 25 (another 300 unsigne...
Category 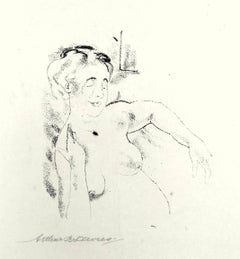 Arthur B. Davies
Resurrection (aka Flying Figures; Border of the Lake), 1916

Arthur B. Davies
Round of Summer (aka Four Figures), First State Proof, 1919

Torment
By Arthur B. Davies
Located in New York, NY
Arthur B. Davies (1862-1928), Torment, soft ground etching with aquatint and roulette, 1919-20, signed with the estate stamp lower right, and signed by the printer Frank A. Nankivell...
Category 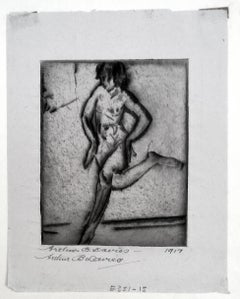 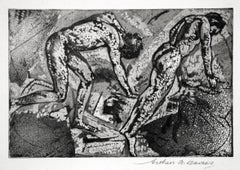 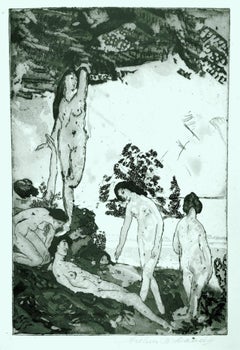 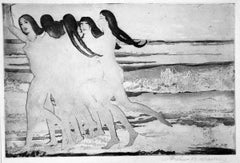 H 18 in. W 21 in. D 2 in.
"Mountain Landscape"
By Arthur B. Davies
Located in Lambertville, NJ
Jim’s of Lambertville is proud to offer this artwork: Framed watercolor of a mountain landscape. Arthur B. Davies (1862-1928) Born in Utica, New York, Arthur Davies gained a repu...
Category

Arthur B. Davies
Study of an Indian Model, 1920

Italian Landscape
By Arthur B. Davies
Located in New York, NY
Though his own paintings—idyllic pastorals inspired by Greek mythology and the Renaissance—suggest that he was immersed more in history than in his own time, Arthur Bowen Davies cham...
Category

Arthur B. Davies
Doorway to Illusion, 1929

H 12 in. W 9.5 in.
Gathering by the Sea
By Arthur B. Davies
Located in Wiscasset, ME
Born in Utica, New York in 1862, Arthur Davies was an avant-garde modernist, well known for his ethereal portrayals of female nudes. Davies studied at the Chicago Academy of Design, ...
Category

Arthur B. Davies
Gathering by the Sea

H 9.75 in. W 7.875 in.
Arthur B. Davies, Lunette (also titled Three Women, Circular)
By Arthur B. Davies
Located in New York, NY
The enigmatic Arthur B. Davies was an early proponent of American Modernism. In particular work on paper from the early part of the twentieth century is increasing hard to locate. ...
Category

Arthur B. Davies
Doorway to Illusion, 1919

Arthur B Davies For Sale on 1stDibs

An assortment of arthur b davies is available on 1stDibs. A selection of these works in the Impressionist, Modern and Post-Impressionist styles can be found today in our inventory. These items have been produced for many years, with earlier versions available from the 19th Century and newer variations made as recently as the 21st Century. Arthur b davies available on 1stDibs span a range of colors that includes gray, beige, brown, white and more. There have been many well-done artworks of this subject over the years, but those made by Arthur B. Davies and Arthur Bowen Davies are often thought to be among the most beautiful. The range of these distinct pieces — often created in paint, etching and oil paint — can elevate any room of your home.

How Much are Arthur B Davies?

Arthur b davies can differ in price owing to various characteristics — the average selling price for items in our inventory is $1,450, while the lowest priced sells for $97 and the highest can go for as much as $50,000.

Born in Utica, NY in 1962, Arthur Davies sold his first sculpture — a small, detailed sailboat carved with a pocketknife — at the age of 12 for $25. After the 1913 Armory Show, Davies began to regularly cast small bronze sculptures and reliefs from wood carvings, and later from clay. These pieces were carved from life on occasion but more often from sketches. As Bennard B. Perlman notes in The Lives, Loves, and Art of Arthur B. Davies (1999), "experimentation in a three-dimensional medium was akin to his use of abstraction in painting, except that color was eliminated, allowing him to concentrate on the angular break up of shapes without the added complexity of considering hue, value, and intensity." Davies exhibited internationally, saw his work enter major public and private collections, and at the time of his death, the Metropolitan Museum of Art organized a large memorial exhibition. Today Davies’ artworks can be found in numerous public collections, including the Metropolitan Museum of Art; Museum of Fine Arts, Boston; Phillips Collection, Washington, D.C.; Art Institute of Chicago; National Gallery of Art; Philadelphia Museum of Art; and Minneapolis Institute of Arts.

Art of the 20th Century

1stDibs offers a wide variety of authentic Mick Rock art for sale. If you are looking for art to add a pop of color to a neutral corner of your living room or bedroom, you can find work that includes elements of red, blue, orange and other colors. You can also search for art by Mick Rock in archival pigment print, archival paper, pigment print and more by medium. Much of the original work by this artist or collective was created during the 20th century and is mostly associated with the modern style. Not every interior allows for large Mick Rock art, so small editions measuring 6 inches across are available. Customers who are interested in this artist might also find and find the work of. On 1stDibs, the price for these items starts at $1,159 and tops out at $9,500, while the average work can sell for $3,000..