H 13.4 in. W 6.3 in. D 5.12 in.
KAWS - Take Figure - Blue Version _BFF Companion
By KAWS
Located in Dallas, TX
This is a brand new piece in perfect condition. Several months after releasing the KAWS Share Figure in February, the artist released his long anticipated KAWS Take Figure. The fig...
Category

H 13.12 in. W 5.99 in. D 5.01 in.
Take (Black)
By KAWS
Located in Bristol, GB
Painted cast vinyl Open edition Stamped on the underside of the feet New, as issued. Some minor imperfections may exist given the nature of the material Comes in the original box
Category 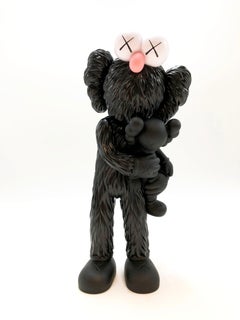 H 13.4 in. W 6 in.
KAWS TAKE: set of 2 works (KAWS Take companion)
By KAWS
Located in NEW YORK, NY
KAWS TAKE: Set of 2 Works - each new in original packaging. These standout KAWS figurative pieces are a variation of KAWS' large scale TAKE sculpture - a key highlight of the exhibi...
Category

H 12 in. W 6 in.
KAWS, TAKE (KAWSONE: OPEN EDITION), PINK, 2020
By KAWS
Located in New York, NY
The ‘KAWS TAKE’ is a vinyl millennial pink art toy made in collaboration with Medicom Toy by KAWS. Recently acquired directly from the KAWSONE portal, the instantly sold out vinyl ar...
Category

H 13.4 in. W 6 in.
KAWS TAKE: set of 2 works (KAWS Take companion)
By KAWS
Located in NEW YORK, NY
KAWS TAKE: Set of 2 Works - each new in original packaging. These standout KAWS figurative pieces are a variation of KAWS' large scale TAKE sculpture - a key highlight of the exhibi...
Category

H 13.4 in. W 6.3 in. D 5.12 in.
Take (Pink)
By KAWS
Located in Bristol, GB
Open edition Stamped on the underside of the feet New, as issued. Some minor imperfections may exist given the nature of the material Comes in the original box
Category

Kaws Take For Sale on 1stDibs

Find the exact kaws take you’re shopping for in the variety available on 1stDibs. Find Contemporary versions now, or shop for Contemporary creations for a more modern example of these cherished works. Adding a kaws take to a room that is mostly decorated in warm neutral tones can yield a welcome change — find a piece on 1stDibs that incorporates elements of pink, blue, purple, brown and more. These artworks were handmade with extraordinary care, with artists most often working in paint, synthetic resin paint and vinyl paint. A large kaws take can prove too dominant for some spaces — a smaller kaws take, measuring 12 high and 5.99 wide, may better suit your needs.

How Much is a Kaws Take?