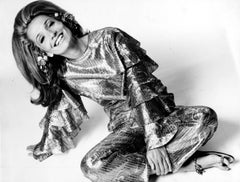 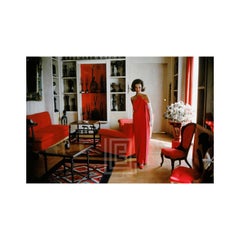 H 22 in. W 17 in.
Jacqueline Bouvier and her sister Lee Radziwill, New York
By Horst P. Horst
Located in New York, NY
All editions signed by the photographer.
Category

H 14 in. W 11 in.
Lee Radziwill
By Horst P. Horst
Located in Charlotte, NC
This photograph is included in "Around That Time, Horst at Home in Vogue", a monograph from Abrams, a tribute to the landmark Vogue’s Book of "Houses, Gardens, People (1968)", which ...
Category

Marilyn Silverstone
Mrs. Kennedy and her sister Princess Lee Radziwill returning from their visit to the Lake Palace Hotel in Udaipur, 1962

H 32 in. W 22 in.
Lee Radziwill in Dior Coral Dress, 1960
By Mark Shaw
Located in Los Angeles Area, CA
ark Shaw shot a major photo feature for McCall's magazine on style icon (and Jackie Kennedy's sister) Lee Radziwill in 1960. Radziwill can be seen here in the office of her London ...
Category

H 22 in. W 32 in.
Mark Shaw-Portrait of Lee Radziwill #1-London, 1962
Located in Richmond, VA
Editioned photograph of socialite Lee Razdiwill taken by Mark Shaw in 1962. Lee was the younger sister of Jacqueline Kennedy and was married to Polish Royalty. Her homes in England ...
Category

H 10.5 in. W 15 in.
Mark Shaw-Portrait of Lee Radziwill #3-London, 1962
Located in Richmond, VA
Editioned photograph of socialite Lee Razdiwill taken by Mark Shaw in 1962. Lee was the younger sister of Jacqueline Kennedy and was married to Polish Royalty. Her homes in England a...
Category

H 13 in. W 20 in.
Mark Shaw-Portrait of Lee Radziwill #3-London, 1962
Located in Richmond, VA
Editioned photograph of socialite Lee Razdiwill taken by Mark Shaw in 1964. Lee was the younger sister of Jacqueline Kennedy and was married to Polish Royalty. Her homes in England a...
Category

H 35.5 in. W 20 in. D 18 in.
Lee Radziwill and Jacqueline Bouvier - Vintage Photo in Capri Island 1970
By Ron Galella
Located in Roma, IT
This Jacqueline Kennedy with her sister Lee is a b/w photograph by Ronald Edward Galella taken in Capri in 1970. In this picture, the First Lady Jacqueline and her sister Lee Radziw...
Category

Lee Radziwill For Sale on 1stDibs

On 1stDibs, you can find the most appropriate lee radziwill for your needs in our varied inventory. You can easily find an example made in the Pop Art style, while we also have 2 Pop Art versions to choose from as well. You’re likely to find the perfect lee radziwill among the distinctive items we have available, which includes versions made as long ago as the 18th Century as well as those made as recently as the 20th Century. On 1stDibs, the right lee radziwill is waiting for you and the choices span a range of colors that includes black, brown, gray and beige. Creating a lee radziwill has been a part of the legacy of many artists, but those crafted by Mark Shaw, Ron Galella, Andy Warhol, Horst P. Horst and Fred McDarrah are consistently popular. Artworks like these — often created in digital print, giclée print and inkjet print — can elevate any room of your home.

How Much is a Lee Radziwill?