H 14.18 in. W 11.42 in. D 15.75 in.
Bob Red Coffee Table
By Garbarino Collections
Located in Milan, IT
A testament to modern, clean design, this coffee table exudes timeless elegance. This essential, unadorned rectangular piece is crafted of Makassar ebony, which is showcased in the m...
Category

H 18 in. W 44 in. D 26 in.
Aureola Red Tall Coffee Table
By Garbarino Collections
Located in Milan, IT
A testament to contemporary aesthetic, this stunning tall coffee table is marked by clean, geometric lines. It features a circular wooden top finished with a shiny coral red polyuret...
Category

H 28.75 in. W 17.72 in. D 17.72 in.
Aureola CF4 F Red Coffee Table
By Garbarino Collections
Located in Milan, IT
Defined by a contemporary aesthetic, this dynamic low coffee table features a circular wooden top with a bright red polyurethane lacquer. The sinuous forms of the top and circular ba...
Category

H 11.82 in. W 43.31 in. D 43.31 in.
Zigzag Red Levanto Coffee Table
By House of Retroguardia
Located in Milan, IT
This superb coffee table channels indisputable elegance with its sleek metal frame and alluring top in red Levanto marble with a wavy texture. Designed by Retroguardia to be paired w...
Category 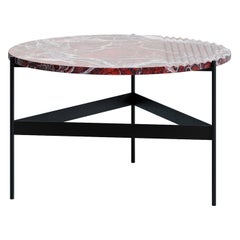 H 17 in. W 42.5 in. D 33 in.
Contemporary Resin Coffee Table, Red Polished Spine Table, by Erik Olovsson
By Studio Erik Olovsson
Located in Stockholm, SE
Spine is a series of tables consisting of two components - a thin aluminium sheet captured in a cast resin surface. The series is a result of many material explorations concerned wi...
Category

H 18 in. W 38 in. D 38 in.
Modern Round Coffee Table Red Levanto Marble Glass Top Satin Steel Base
By Cupioli made in Italy
Located in Rimini, IT
This stunning table is handcrafted using three kind of materials as satin-finished stainless steel for the three legs and higher top, Red Levanto Italian marble and glass for the lo...
Category

H 18 in. W 52 in. D 30 in.
Pierre Cardin Attributed Red Laminate and Glass Coffee Table
By Pierre Cardin
Located in Miami, FL
The design of the table is eponymous with the Pierre Cardin logo. It is made of red laminate over pressed wood with a glass surface that ejects from the base and sits on rolling ball...
Category

H 14.25 in. Dm 28.25 in.
Aureola Coffee Table with Red Luana Marble Top
By Garbarino Collections
Located in Milan, IT
A mesmerizing combination of elegant, warm hues, this superb coffee table exudes timeless sophistication. The round top is made of Red Luana marble, whose natural colors exquisitely ...
Category

H 18.51 in. W 23.63 in. D 23.63 in.
Fabulous Statement Coffee Table in Red/Orange Lacquer
Located in Dallas, TX
This is a custom coffee table with a swirl design. We have lacquered in a high-gloss red/orange.
Category

H 18.5 in. W 40.75 in. D 40.75 in.
Double Heart Coffee Table
By Giulia Ligresti
Located in Milan, IT
The rugged versatility of this iron coffee table is softened by the romantic inspiration of the design, making it a perfect addition to an eclectic home décor. This fun attention-gra...
Category

H 19.1 in. W 21.66 in. D 21.66 in.
No Entry Coffee Table
By Giulia Ligresti
Located in Milan, IT
Entirely crafted by hand, this iron coffee table is a decor piece that will infuse a unique character to an eclectic home or office decor. Featuring a red-finished pedestal leg and c...
Category

H 14.57 in. W 24.81 in. D 37.41 in.
Riga e Basta Coffee Table
By Giulia Ligresti
Located in Milan, IT
The perfect accent piece for adding artful appeal and character to any room, this original coffee table features a bright red iron pedestal base and round top reproducing a "Do Not E...
Category

H 15 in. W 39 in. D 39 in.
Geometric Coffee Table in Black and Red Lacquer with a Glass Top
Located in Los Angeles, CA
Stunning 1970s square table with a fantastic geometric design. This table is really eye-catching form any angle you see it, the black lacquered finish and the red center cutout compl...
Category

H 16 in. Dm 52 in.
Square Clear Floating Lucite and Red and White Marble Italian Coffee Table
By Karl Springer, Willy Rizzo
Located in Houston, TX
A red toned Italian marble with beautiful white veining functions as a base for a floating clear Lucite tabletop. The marble base is vintage and the Lucite top is a contemporary addi...
Category

H 17 in. W 43 in. D 43 in.
Contemporary Uniform Aluminium Coffee Table in Silk Grey and Pink Red Marble
By Other Kingdom
Located in London, GB
Other kingdom's uniform tables complement the natural warmth of a marble top with a precisely formed metal base that is fabricated in powder coated aluminium. The marble top is avai...
Category

H 8.86 in. W 59.06 in. D 23.63 in.
Midcentury Round Coffee Table with a Red Back-Painted Glass Top, Italy 1950s
Located in Bresso, Lombardy
It features a wooden frame with iron legs and brass feet caps, and a back-painted glass top. It is a vintage item, therefore it might show slight traces of use, but it can be conside...
Category

H 11.25 in. W 27.5 in. D 59 in.
De Sede Circular Coffee Table
By De Sede
Located in New York, NY
DS-611/93 large coffee table by De Sede. DS-611 coffee table series is a stylish counterpart to the sofa for use in home as well as public interiors. The round tabletop is integrated...
Category

+ 3 more
H 12 in. Dm 49 in.
T-01 Coffee Table / Magazine Rack by Superstudio
By Superstudio
Located in Brooklyn, NY
Created in the 1960s to affect a sense of orderliness, it goes together with the Sofo sofa, with the same length as the seat and half the width, this coffee table is made by bending ...
Category

H 12 in. W 16.15 in. D 32.25 in.
Wing End Table Red
Located in Milan, IT
Part of the Intersections collection, the red wing end table is a contemporary piece creates a harmonious aesthetic. The brass base and Marquinia marble perfectly complement the vert...
Category

H 18.9 in. W 21.26 in. D 14.18 in.
Beautiful Unique Colorful Coffee Table by Charly Bounan
By Charly Bounan
Located in Geneve, CH
Charly Bounan, is a Parisian designer renowned for its refined creative style and the important eclecticism of its influences. As an art dealer and designer he worked closely with...
Category

H 15.75 in. W 55.12 in. D 23.63 in.
Single Form Square Steel Coffee Table in 13 Colors
By Jo Wilton and Mirka Grohn
Located in Leicester, GB
Our latest design - the single form coffee table. The design of the tables is elemental allowing the focus on the form and function. Depending on the choice of the color, the minimal...
Category

How Much is a Red Modern Coffee Table?

Prices for a red modern coffee table can differ depending upon size, time period and other attributes — at 1stDibs, they begin at $287 and can go as high as $20,549, while the average can fetch as much as $2,710.