H 28 in. W 20 in. D .1 in.
1981 Collectible Art Deco Poster by Erte Framed
By Erté
Located in San Diego, CA
Beautiful and highly collectible framed poster by Erte circa 1981 for Circle Gallery in Chicago the wood frame with gold leaf edge its original with protective glass, some wear on th...
Category

H 28 in. W 22 in. D 2 in.
Art Deco Poster Advertising Ciney Belgium Ovens in Red and Black
Located in London, GB
Hand printed red and black poster advertising Cinay ovens with a strong image of a working man with Hammer and the Ciney logo below with signature of the makers, Belgium in the 1930s...
Category 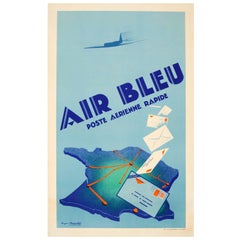 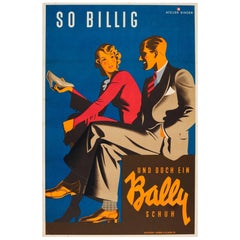 H 39 in. W 29 in. D .1 in.
'Bandol' Sports & Ski Art Deco 1930s Original Vintage Poster by Andre Bermond
By Andre Bermond
Located in Melbourne, Victoria
Beautiful Art Deco poster for 'Bandol', a modern resort area in Europe. It began as a health resort for the upper class at the end of the 18th century during the cooler, winter month...
Category

H 62 in. W 46 in. D .1 in.
Gladys Williamson, 'Lady With a Parrot' Gouache Art Deco Poster Design (c.1931)
Located in London, GB
To see our other Modern British Art, scroll down to "More from this Seller" and below it click on "See all from this Seller" - or send us a message if you cannot find the artist you ...
Category

H 45.25 in. W 33.25 in. D 1.13 in.
"Au Grand Pasteur" French Art Deco Furniture Original Vintage Poster
By C. Villot
Located in Boston, MA
A fine original vintage Art Deco poster for a furniture store in southeastern France near Grenoble. The poster features a dramatic birds-eye view of a man enjoying a newspaper in a l...
Category

Original Poster for a Review at the "Folie Bergere" in Paris, 1930

How Much are Vintage Art Deco Posters?

A 1920s Art Deco Necklace with a Stunning Drop Emerald

The cabochon gem centerpiece and diamond-set elliptical rings makes it a marvel of Gatsby-era glamour.