Albert Welti was a Swiss painter and etcher, best known for the fresco, Die Landsgemeinde in the meeting room of the Ständerat at the Federal Palace and for his dreams and nightmare paintings, began studying engraving with Johann Conrad Werdmüller. In 1880, Welti did a one-year photography apprenticeship with his uncle Oswald Welti in Lausanne. In 1882, he attended the Academy of Fine Arts of Munich under the influence of Arnold Böcklin, who he met in 1885. After graduating, Welti obtained financial support from Karl von Rose, a generous patron of the arts. After his father's death, he assuaged his grief by visiting Innertkirchen and Vättis, where he created numerous pastel nature studies. After that, Welti worked in Munich until 1908, where he became friends with the author, Hermann Hesse. His work was part of the painting event in the art competition at the 1924 Summer Olympics. In addition to his art, Welti also designed postage stamps for the Swiss Post.

Albert Welti
Walkürenritt (the Ride of the Valkyries) - Original Etching by Albert Welti, 1890

H 22.25 in. W 18.12 in. D 0.04 in.
Illustration from the series "Les Fleurs du mal" - Etching After O. Redon
By Odilon Redon
Located in Roma, IT
Edition of 150 copies. One of the 50 H.C.copies in Roman Numerals. This print is one of the illustrations realized by Odilon Redon for an important edition of the book "Les Fleurs du...
Category 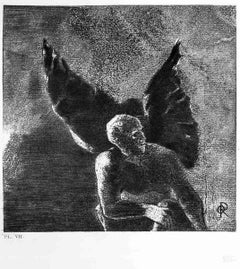 H 12.8 in. W 9.85 in. D 0.04 in.
Das geneckte Hündchen (The Puppy Dog) - Original Etching by K. Koepping - 1904/5
Located in Roma, IT
Das Geneckte Hündchen is a black and white etching on paper, realized by the German artist, Karl Koepping. From the portfolio “Deutscher Kunstverein zu Berlin “ published by Vereins...
Category

H 15.16 in. W 11.54 in. D 0.04 in.
Illustration from the series "Les Fleurs du mal" - Etching After O. Redon
By Odilon Redon
Located in Roma, IT
Monogram of the artist on plate. Edition of 150 copies. One of the 50 H.C.copies in Roman Numerals. This print is one of the illustrations realized by Odilon Redon for an important e...
Category

Find wide variety of authentic Albert Welti art available for sale on 1stDibs. Browse by medium to find art by Albert Welti in etching and more. Not every interior allows for large Albert Welti art, so small editions measuring 17.329999923706055 inches across are available. Customers who are interested in this artist might also find the works of Odilon Redon, Franz von Stuck and Ferdinand Hodler & R. Piper & Co.. On 1stDibs, the price for these items starts at $1,036 and tops out at $1,036, while the average work can sell for $1,036. Albert Welti art prices can differ depending upon medium, time period and other attributes.