Alberto Salietti was born in Ravenna on March 15, 1892. Despite having played almost the totality of his artistic career in Milan and Liguria, Alberto Salietti, a painter, engraver, mosaicist and fresco, has remained a reference point for Romagna painters, especially between the two wars. After moving with his family to Milan, Salietti attended the Brera Academy until 1914. In 1920, he exhibited at the Venice Biennale and in 1922 in Milan with Oppi, Dudreville, Tosi and Malerba. After the Venice Biennale of 1924, he joined the Novecento movement of which he became secretary in 1925. In 1926, he exhibited at the “First exhibition of the Italian twentieth century" and in 1927 he was among the founders of the Group of seven modern painters together with Funi, Sironi, Tosi, Carrà, Marussig and Bernasconi. In 1929 he exhibited in Barcelona, in 1937 in Paris, then at the II and III Rome Quadriennale and at the Venice Biennale of 1942 where he won the Grand Prize for painting. In 1933, he was appointed the corresponding member of the Wiener Secession and from 1933–36 he was a member of the Superior Council for Antiquities and Fine Arts in Rome. In 1941 he moved permanently to Chiavari. The most important posthumous exhibitions include the one held at the Palazzo della Permanente in Milan in 1964 and 1972 one in Chiavari. As a portraitist and landscape painter, Salietti, a patient distiller of post-impressionist, secessionist and twentieth-century influencer, has made an original contribution to Italian art, distinguishing itself by a joyful and optimistic adherence to reality, immune from intellectualism and ideologies. He died at Chiavari, in 1961. 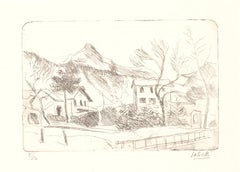 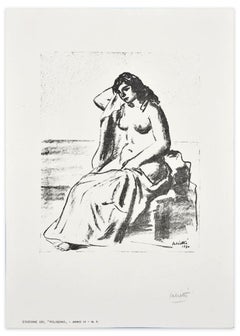 H 13.08 in. W 9.38 in. D 0.08 in.
Violinist - Original Print - 1960s
By Mino Maccari
Located in Roma, IT
Violinist is an original artwork realized by Mino Maccari in the 1965 ca. Black and white etching on paper. Hand-signed by the artist on the lower margin. Numbered on the lower l...
Category

H 19.3 in. W 12.21 in. D 0.08 in.
Portrait - Original Etching Print - 20th Century
Located in Roma, IT
"Portrait" is an original drawing in etching, realized by an Anonymous French Artist of the XX Century . The state of preservation of the artwork is very good. Sheet dimension: 19 ...
Category

H 7.49 in. W 7.09 in. D 0.04 in.
Deposition of Christ - Original Etching Print - 19th Century
Located in Roma, IT
"Deposition of Christ" 1820's is an original drawing in etching technique realized by an Anonymous Artist of the 19 Century . The state of preservation of the artwork is very good. ...
Category

H 4.53 in. W 6.3 in. D 0.04 in.
Julius Cesar - Original Etching on Cardboard - 18th Century
Located in Roma, IT
Julius Cesar is an original etching artwork on the cardboard, realized by an Anonymous artist in 1700 ca. In very good conditions. The artwork represents the portrait of Julius Ces...
Category

H 7.13 in. W 5.12 in. D 0.04 in.
Margot La Critique - Etching, Aquatint and Drypoint by F. Braquemond - 1854
By Félix Bracquemond
Located in Roma, IT
Margot la critique is an originaletching on Chine collé, realized by Frenc artist Félix Henri Bracquemond published in L’Artiste in 1854. In good conditions. This Etching is Re...
Category

H 8.27 in. W 6.11 in. D 0.12 in.
Still Life - Original Etching on Paper by Mario Logli - 20th Century
By Mario Logli
Located in Roma, IT
Still Life is an original etching on paper realized by Maro Logli. Hand-signed at the bottom of the image. numbered on the lower right, edition, IX/XXX. Very good condition. Shee...
Category

H 12.21 in. W 9.06 in. D 0.04 in.
Previously Available Items
Alberto Salietti Oil On Canvas 1940s 1950s, Female Portrait
By Alberto Salietti
Located in Milan, IT
Oil on canvas. Signed bottom right. Portrait of a young woman in a black evening gown, enlivened by a big flower shawl that she wears draped on a shoulder. Piece by Alberto Salietti,...
Category

1stDibs offers a wide variety of authentic Alberto Salietti art for sale. You can also browse through art by Alberto Salietti in etching, lithograph and more by medium. Much of the original work by this artist or collective was created during the 20th Century and is mostly associated with the Modern style. Not every interior allows for large Alberto Salietti art, so small editions measuring 9.380000114440918 inches across are available. Customers interested in this artist might also find the work of Elyse Ashe Lord, Clare Leighton and Ellison Hoover. Alberto Salietti art prices can differ depending upon medium, time period and other attributes. On 1stDibs, the price for these items starts at $306 and tops out at $979, while the average work can sell for $576.