Alessandro Nastasio was born in Milan in 1934. In 1952, he followed the free school of the nude led by Aldo Salvatori. In 1960, he attended the Atelier of Giorgio Upilio, where Giacometti, Lam, Fontana, De Chirico worked and where he had the opportunity to study the themes of the inspiring myths. He worked at the MAF foundry with the master Tullio Figini who shared the secrets of the lost wax Renaissance fusion and where he met the masters Crocetti, Manfrini, Manzu, Minguzzi, Fabbri. Nastasio then moved on to Quinto de Stampi at the De Andreis foundry where Marino Marini, Pomodoro, Rudy Wach, Strebelle, Negri and Rosental operated. A regular reader of the great Sapienza texts of antiquity, he trained in particular on the Bible, which he illustrated with woodcuts, aquatints, etchings and linocuts, especially the Song of Songs, the book of Ecclesiastes and several pages of the Gospels. He also drew his inspiration from the philosophical-religious tradition of the Eastern world through the reading of Rig-Veda, Upanishad and the Matnavi of Rumi. In 1966–67, he obtained the chair at the Academy of Fine Arts of Brera and for 30 years, he devoted himself to the teaching of Art Education in various schools. Nastasio created works both pictorial and plastic in collaboration with famous architects such as Figini and Pollini, De Carli, Gardella, Faranda, Selleri, Ponti. His talent soon came to the attention of various art dealers Max G. Bollag of Zurich and Paul Marmaridis of Athens and later Georges Zeenny of Beirut, who bought his works and included him among the masters of contemporary art. He has exhibited in numerous solo shows in Italy and abroad, including the last ones in 2013, Verdi Meetings and Suggestions (1813–1913), Spazio Oberdan, Milan and Trezzo sull’Adda, Anthology of bronzes and paintings presented by Laura Bosio, Municipality of Pessano con Bornago in 2014 Bronze Portal Porta Fidei, SS. Martyrs Nazaro and Celso, presentation by Renzo Sala. Nastasio lives and works in Milan. 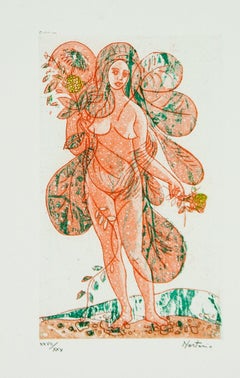 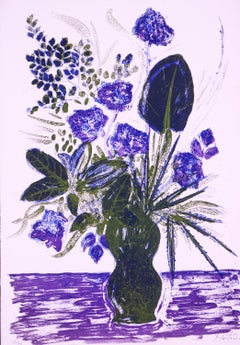 Bouquet in Red and Blue
By Alessandro Nastasio
Located in New York, NY
Original signed and numbered lithograph by Alessandro Nastasio. Born in Milan, Italy, 1934, Nastasio studied with Tullio Figini and Aldo Salvatori. In 1960 he joined the Atelier Gi...
Category

Le Village Inspire, scenes from the Montmartre District of Paris, Utrillo 1950
By (after) Maurice Utrillo
Located in Gunnison, CO
Category