Alfred Dubucand, Born in Paris on November 25th of 1828. Dubucand studied under Justin Marie Lequien (French, 1796–1881) and later under Antoine-Louis Barye. He worked almost exclusively as an animal sculptor or "Animalier", though he was very familiar with capturing the human element in his Equestrian and portrait groups; some of his most successful works were his studies of French-occupied North Africa and his Eastern nomadic subjects, these often hunt scenes with horse and rider, sometimes accompanied by domestic dogs. His bronzes are always exceptionally well-detailed with special attention shown to the patina, a skillset he learned from Barye; his early works are often characterized by more complex and varied chemical patination. In 1867, his wax model of Dead Pheasant was exhibited for his debut at the Paris Salon. Dubucand continued to exhibit his juried works at Salon every year through 1883, these often exhibited as wax models and sometimes plaster that subsequently were cast in bronze. His exhibitions must have been rather well received, as much of his work first presented in wax was in later years again exhibited at Salon cast in bronze. 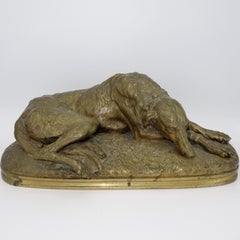 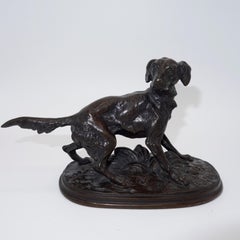 French Animalier bronze of an Italian greyhound with a fan
By Pierre Jules Mêne
Located in Bath, GB
Category