Son of Clelia Bompiani and Ercole Battaglia, Allesandro Battaglia was trained by his grandfather Roberto Bompiani, who studied drawing and completed his artistic training with the advice of his mother Clelia and uncle Augusto. Later, although linked to the school of Cesare Maccari and Ludovico Seitz, he followed with interest mainly the realism and the dramatic style of Domenico Morelli, who fascinated him with his skillful and intense colorism. At only thirteen, Battaglia took part in the exhibition of the Roman Society of Cultori and Amateurs of 1883, with a conventional Portrait of the Sister, taking part in almost all the Italian and foreign exhibitions, including that of Berlin in 1896 where his watercolor, Livia, was purchased from the Magdeburg museum, while the great painting Final Exams, of a pathetic sentimentality to Toma, was exhibited and sold in Munich. In 1904, Battaglia was among the founders, together with Enrico Coleman and Onorato Carlandi, of the Group of XXV of the Roman Countryside who intended to return to landscape painting, not in an academic sense, but as a recovery from the real landscape. He entered the group with the nickname of Marine Calf, for his somatic traits, devoting himself to animated scenes of the Roman Agro that he loved deeply and which he portrayed with sentiment and vigor coming out of the studio to gather the inspirations in the shadow of the ruins of the Roman aqueducts and to translate the vibrations it received from the open-air. He was an Academician of San Luca and a councilor of the Association of Roman Watercolorists and he won prizes in numerous exhibitions. 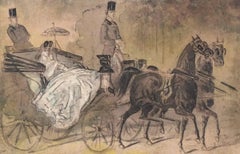 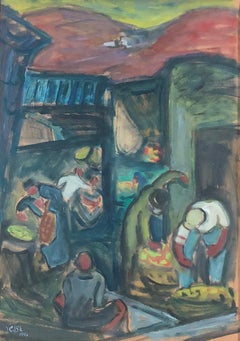 On the Lookout
By Cassilly Adams
Located in Missouri, MO
Category