Born in India, Anish Kapoor has lived in England since the 1970s. Beginning in 1973, he studied in London at the Hornsey College of Art before going on to the Chelsea School of Art. After spending some time in India in 1979, Kapoor gained recognition on the international scene during the early 1980s.

"The void is not silent. I have always thought of it more and more as a transitional space, an in-between space,” Kapoor has said.

Since the early 1980s, Kapoor has not only produced some of the most innovative work in contemporary sculpture but has also done much to re-establish certain original sculpture forms. Although he is influenced by his cultural origins, the artist continues to incorporate new ideas into his work.

Born out of spiritual reflection, Kapoor's pieces strive to give form to the vital and opposing forces, as in his series of “Shadow Prints” — full/empty, material/spiritual, light/darkness, visible/invisible, aware/unaware, male/female, land/sea. Through a visual vocabulary that incorporates color pigments in particular as well as glass fiber and stainless steel, the artist has developed an ambitious body of work in sculpture and installation that at times approaches design and architecture.

Often displayed in public spaces, Kapoor’s sculptures are striking for their apparent simplicity. Yet his work is hard to overlook and has a hold on its audiences.

Find authentic Anish Kapoor prints and other art on 1stDibs.

Untitled
By Anish Kapoor
Located in London, GB
Etching in red Edition od 150 signed in pencil. Co-published by the Artist and the Terrence Higgins Trust, London, on wove paper (unframed) image: 23 by 29.7cm.; 9 by 11⅝in. she...
Category 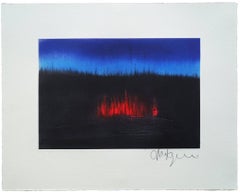 Moiré 2
By Anish Kapoor
Located in Tbilisi, GE
signed at the back Edition of 39
Category

Moire 3
By Anish Kapoor
Located in Tbilisi, GE
signed at the back. Edition of 39
Category

Moiré 1
By Anish Kapoor
Located in Tbilisi, GE
Signed at the back
Category

Halo
By Anish Kapoor
Located in Palm Desert, CA
"Halo" is a sculpture by British artist, Anish Kapoor. Because the intricacy of fabricating the fan pattern was extremely difficult, few pieces were made. Reflective surfaces have b...
Category

H 30 in. W 35 in.
Anish Kapoor, Three-Part Porcelain Scuplture, Titled "Chastre", 1993, Signed
By Anish Kapoor
Located in Wargrave, Berkshire
Anish Kapoor, UK. A three-part porcelain sculpture consisting of a bottle form and ovoid vase both of which rest into the textured base. The base is signed, titled "Chastre" and date...
Category

Find wide variety of authentic Anish Kapoor art available for sale on 1stDibs. You can find work that includes elements of blue, orange and other colors if you are browsing the collection of art to introduce a pop of color in a neutral corner of your living room or bedroom. You can also search art by medium to find Anish Kapoor in etching, gouache, paint and more. Much of this artist's original work was created during the 21st Century and Contemporary, and is mostly associated with the Contemporary style. Not every interior allows for large Anish Kapoor art, so small editions measuring 9 inches across are available. Customers interested in this artist might also find the work of Dan Namingha, Ricardo Mazal and Tracey Emin. On 1stDibs, the price for these items starts at $6,895 and tops out at $18,927 while the average work can sell for $9,500.

H 30 in. W 35 in.
Anish Kapoor, Three-Part Porcelain Scuplture, Titled "Chastre", 1993, Signed
By Anish Kapoor
Located in Wargrave, Berkshire
Anish Kapoor, UK. A three-part porcelain sculpture consisting of a bottle form and ovoid vase both of which rest into the textured base. The base is signed, titled "Chastre" and date...
Category

$26,500
18kt Gold Chandelier Diamond Earrings
Located in Valenza, IT
On sale on First Dibs only for 3 week. This beautiful ring is a stunning piece created in Valenza. 18kt white gold grs 17.20 a beautiful chandelier earrings in white diamonds c...
Category

$2,000
L'Express Beyrouth-Enfer
By Etel Adnan
Located in London, GB
Edition of 100. *This print is supplied within a clamshell box, with book of the same name, as issued.
Category