Antonio Acquaroni was a copper draftsman and engraver. Friendship with his fellow citizen and contemporary L. Calamatta, who moved to Rome as a very young man, a friendship that lasted until Calamatta's first visit to Paris in 1823, had no professional importance. He was a pupil of F. Giangiacomo. There, Acquaroni gave himself to the illustration of Rome, he was said to see the city "with the sixths in his eyes," and it was impeccable in terms of documentary fidelity. For this reason, when the chalcography chambers wanted to enrich his background with Roman views, he called him to be part of his ordinary collaborators. There, Acquaroni systematically shied away from the deep bites, and when he wanted to shade, as in the piranesiggiante series of Ancient Bridges on the Tiber and on the Aniene released in 1836, it did so extremely sparingly. In addition to the engravings already mentioned and other sporadic, a series of small-format Views of Rome and a monumental series of Fountains of Rome (started in 1837), three prints of which were described by F. Hermanin, together with a fourth due instead to Giovanni Acquaroni. Of particular interest is the sea ​​horse fountain in Villa Borghese and the Fontanone dell'Acqua Felice. Of them, it is still a great illustration of the Port of Civitavecchia. The two great books, later passed to the Moraldi collection, in which he ordered his best watercolor drawings with views of Rome, are also to be remembered. Its branches are mostly kept at the National Chalcography of Rome. Acquaroni died in Rome in 1874. 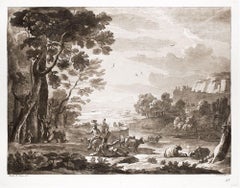 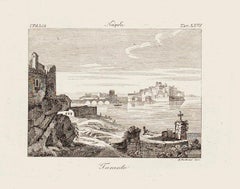 Landscape - Etching and Drypoint by Edmone A. Ades - Mid 20th Century
Located in Roma, IT
Category

Scilla - Hamlet under the Cliff - Etching and Watercolor by G. Omiccioli
By Giovanni Omiccioli
Located in Roma, IT
Category

Sunset in the Alleys - Original Etching and Watercolor by G. Omiccioli
By Giovanni Omiccioli
Located in Roma, IT
Category

View Of Kinnungam - Original Hand Watercolored Etching by A. Leide
By Pieter Van Der Aa
Located in Roma, IT
Category