Renzo Biasion was born in Treviso in 1914, he moved to Venice, where he graduated from the local art school and taught drawing in secondary schools. In 1940, when Italy entered World War II, he fought on the Greek-Albanian front as a second lieutenant in the infantry and began writing a war diary that would then be lost. After the Greek campaign, he was transferred, with the German troops, to Crete. With the announcement of the armistice of 8 September 1943 and the disbanding of the Italian army, he was taken prisoner by the Germans and sent to concentration camps first in the Netherlands, then in Poland and Germany. During his imprisonment, he made drawings of the lager and portraits from the life of Italian and German soldiers, he also began writing a prison diary. In 1944, he managed to escape and returned to Italy. After the war, Biasion resumed teaching and exhibited some works in a Venetian art gallery, arousing the appreciation of the poet and essayist Sergio Solmi. The tragic experiences of war and imprisonment are transfused in writings, drawings, paintings and engravings. He also began composing a series of stories, equally inspired by the memories of war, which would give life to Sagapò, a novel that Elio Vittorini had printed in Einaudi's I Gettoni collection in 1953. And it is in Sagapò (in Greek I love you), his most famous literary work, that the Mediterranean film inspired to, directed in 1991 by Gabriele Salvatores, winner of the Oscar for the best foreign-language film in 1992. There are numerous collaborations as an art and literary critic in periodicals such as Il Verri, Le Vie d'Italia, newspapers: Gazzetta del Popolo, Il Resto del Carlino, Corriere d'Informazione. In the weekly paper Oggi, he edited an art column for 35 years. Renzo Biasion and the etching: Renzo Biasion's etchings have been made since the 1960s and the dominant features of all his art are visible in them. With a sober language, he represents interiors and landscapes immersed in the silence that is stillness is not solitude. 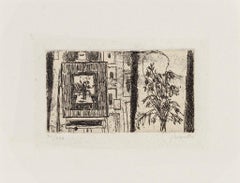 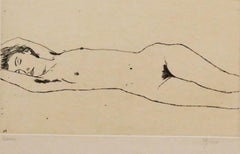 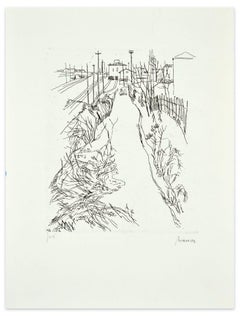 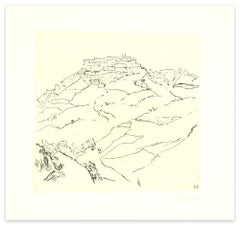 A Day on the Hill - Original Etching by Renzo Biasion - 1966
By Renzo Biasion
Located in Roma, IT
Image dimensions: 25.4 x 34.7 cm. Una giornata in collina is a beautiful black and white etching on paper, realized in 1966 by the Italian artist, Renzo Biasion. Titled on plate o...
Category

Wildwood
By Dante Ricci
Located in Roma, IT
Category