A pupil of François-Édouard Picot and Jean-Joseph Bellel, Théophile Chauvel entered the Imperial School of Fine Arts on March 4, 1854. In the same year, he won second prize in Rome for historical landscape. He first entered the Paris Salon in 1855, where he painted and exhibited until 1859. At that time, he devoted himself to dry point, a type of lithography and etching, from 1861 to 1867 where he represented, among other things, views of the forest of Fontainebleau, then reproductions of works by the masters of the Barbizon school.

From 1874–75, Chauvel worked for the annual album L'Eau forte and the magazine L'Art, of which he became director in the 1890s and in which were reproduced his prints after Théodore Rousseau, Jules Dupré, Narcissus Díaz de la Peña, and Charles-François Daubigny. But it is in his engravings of interpretation of Corot that he asserts all his mastery. Chauvel was a medalist at the Salon in 1870, 1873 and 1878. He won the medal of honor at the Salon des Artistes Français, the first awarded to the engraving section, in 1881. He was awarded the grand prix of the Salon in 1889 and 1900. He was appointed Knight of the Legion of Honor in 1879, then promoted to Officer of the same order in 1896.

H 13 in. W 15.5 in.
Untitled
By Tsuguharu Leonard Foujita
Located in Fairlawn, OH
Edition: 445, this being one of the 120 proofs of varying states included in the deluxe edition of the book, second state of three. From: La Troisième jeunesse de Madame Prune (The ...
Category 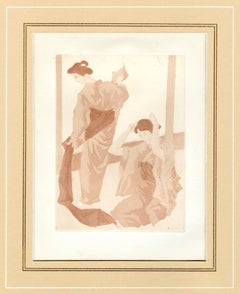 H 20 in. W 13.25 in.
Triste Os (Sad Bones)
By Georges Rouault
Located in Fairlawn, OH
Monogrammed and dated in the plate lower left Edition: 250 References And Exhibitions: Plate 8 from the series "Cirque de l'Etoile Filante" (Circus of the Shooting Stars) The sui...
Category

H 11.13 in. W 14.88 in.
Dames charmante et charmante a tous egard
By Marc Chagall
Located in Fairlawn, OH
(A charming lady chatting with a lady perfect in every possible way) Signed in the plate. No pencil signed impressions are existent. Edition: 368 (including 50 imps on japan) inclu...
Category