Antonio Fontanesi was an Italian painter, engraver, teacher, and soldier. He was born on February 23, 1818, in Reggio Emilia. He was one of the most important 19th-century Italian painters, though somewhat unknown. After fighting in the First Independence War, he moved to Geneva, where he met local painters that encouraged him to paint landscapes and to open to European artistic novelties. In Paris, Fontanesi met Corot and Barbizon painters, whilst in London, he was influenced by Turner’s and Constable’s works. He taught in Lucca, Turin and then in Tokyo. Fontanesi's artworks are very suggestive, rich in lyricism and melancholic, romantic and according to some scholars, Pre-Symbolist atmospheres. Fontanesi observed and studied natural reality to reach a deeper and more universal motive and for this reason, he is considered one of the most emblematic Italian Romantic painters of the European Romantic movement. Fontanesi was also a fine draftsman and expert etcher, his etchings and lithographs are characterized by the same research on atmospheric values as in painting, with synthetic and essential light effects. Fontanesi passed away on April 17, 1882, in Turin. 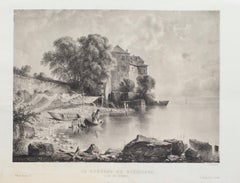 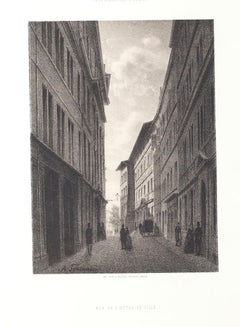 Grand Quai - Original Lithograph - 19th Century
By Antonio Fontanesi
Located in Roma, IT
This splendid lithograph Grand Quai is part of the series of prints dedicated to views of the city of Geneva, engraved by the Italian artist Antonio Fontanesi. The state of preserva...
Category

Geneva, Cour Du Collège - Lithograph by A. Fontanesi - 1854
By Antonio Fontanesi
Located in Roma, IT
This splendid lithograph Interieur de Geneve. Cour Du Collège is part of the series of 20 prints dedicated to views of the city of Geneva, engraved by the Italian artist Antonio Font...
Category

Impressionist Landscape with Figure and Boat
By Antonio Fontanesi
Located in Houston, TX
Beautiful impressionist style painting of a man in a boat among large trees with a sunrise in the background by artist Antonio Fontanesi. Dimensions Without Frame: H 28 in. x W 35.5...
Category