Antonio Jacobsen was a Danish-born American maritime artist known as the Audubon of Steam Vessels. Jacobsen's Painted Ships on Painted Oceans, includes some 100 color pictures of the artist's ship paintings. The public rooms of The Griswold Inn in Essex, Connecticut, the oldest continuously run tavern in the United States, features the largest privately held collection of Jacobsen's paintings. John McMullen, a naval architect and marine engineer, had a collection that included 75 paintings by Jacobsen, the first two of which were found in the 1940s in the offices of the family ship repair business. On February 19, 2006, Fetching The Mark, an unsigned painting of the racing yacht Dreadnought attributed to Jacobsen, was sold at auction for $281,000, more than triple the highest price previously paid for one of Jacobsen's works. The piece had been brought to an Antiques RoadShow event in Tampa, Florida, and had originally been thought to be a work of Jacobsen's contemporary James E. Buttersworth, until further research led to a conclusion that it was by Jacobsen.

New York Yacht Club Race, 1878
By Antonio Jacobsen
Located in New York, NY
An early and important marine painting by one of the most important 19th century American maritime artists. Other artists of the period include Cozzens, Buttersworth, Salmon, and Fit...
Category 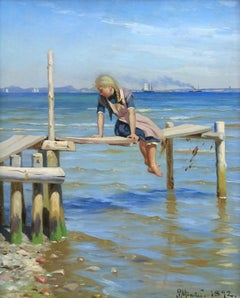 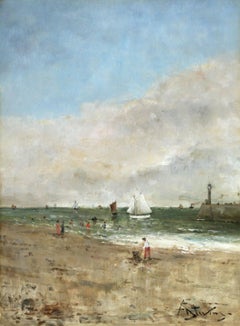 olof-hermelin
Sunset on the Boardwalk at Cape May, New Jersey 1876 - Landscape - Olof Hermelin, 1876

By The River
By Dorothea Sharp
Located in Marlow, Buckinghamshire
Category

Dorothea Sharp
By The River, circa 1935

H 28 in. W 41.5 in. D 3 in.
S.S. Chateau Margaux - 19th Century Oil, Maritime Landscape by Antonio Jacobsen
By Antonio Jacobsen
Located in Marlow, Buckinghamshire
Oil on canvas by Antonio Jacobsen depicting a French ship sailing on a choppy sea. Signed, dated 1888 and inscribed with the artist's address lower right. This painting is not curren...
Category

H 21 in. W 26 in. D 2 in.
The Packet James Foster
By Antonio Jacobsen
Located in New York, NY
Built in 1854 for C.H. Marshall, by then the owners and operators of New York's famous Black Ball packet line, by William H. Webb, New York's premier ship builder. This powerful pain...
Category