Antonio Masutti was an Italian painter, draftsman, engraver, lithographer, illustrator, and caricaturist. From a poor and numerous family, Masutti managed to redeem himself: his talent was discovered almost by chance and confirmed by several prizes that he won between 1830 and 1834. From 1839, he worked at the Kier printing plant. Masutti made the illustrations for the Strenna Triestina for the editions of 1839–40. He moved to Rome, first to continue his academic career, then changed his mind, entering the group of engravers and illustrators that revolved around the figure of the intellectual and patriot Michelangelo Pinto. For the latter, he made the drawings for the satirical newspaper Il Don Pirlone, of which 106 are now preserved at the British Museum in London. Masutti knows the Piedmontese group: the engraver Enrico Parmiani who puts him in contact with Agostino Lauro. Following Pinto, he moved to Turin in 1849. He continued to work for Pinto at Il Don Pirlone in Rome. Starting from 1851, he illustrated the Pantheon of the martyrs of Italian freedom. For the Turin bourgeoisie, he began to create miniature portraits for which he received good feedback. In 1856, Masutti illustrated the New Mysteries of Contemporary Rome, one of his most important illustrative works. He established a close relationship with Cavour, of whom he made many portraits. Between 1860–63, Masutti illustrated the History of Italy by Giuseppe La Farina and the five volumes of Pietro Corelli La Stella d'Italia or Nove Secoli di Casa Savoia. He came into contact with the major Risorgimento writers for whom he worked as an illustrator, in addition to Prati, also Francesco Domenico Guerrazzi and Antonio Ranieri. Masutti’s portrait of King Vittorio Emanuele II, engraved by Agostino Lauro, got him national resonance. Vittorio Emanuele II gave him the title of knight. 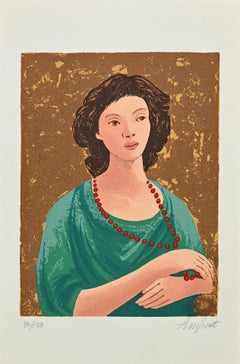 H 15.75 in. W 15.75 in. D 0.04 in.
Figures - Original Lithograph by Aligi Sassu - 1983
Located in Roma, IT
Figures is an original lithograph realized by the Italian artist Aligi Sassu in 1983. This Artwork is depicted through strong and confident strokes in a well-balanced composition. ...
Category

H 13.39 in. W 9.65 in. D 0.08 in.
Margherita - Original Lithograph - 1881
Located in Roma, IT
Margherita is an original hand-colored lithograph on paper realized in 1881 by an anonymous artist of the 19th Century. Titled at the bottom and dated on plate. The state of preser...
Category

H 13 in. W 9.45 in. D 0.04 in.
Landscape - Lithograph by Pierre Paulus - 1914
Located in Roma, IT
Landscape is a lithograph realized by Pierre Paulus. Good conditions, except for some foxings. Hand-signed. Numbered. Edition, 65/100. The artwork is depicted through soft stroke...
Category

H 16.54 in. W 24.02 in. D 0.04 in.
Parisian - Lithograph by Gustave Dorè - 1854
By Gustave Doré
Located in Roma, IT
Parisian is aLithograph realized by Gustave Dore in 1854. Good conditions except for some foxings. Hand-singed. The artwork is depicted in a well-balanced composition.
Category

1stDibs offers a wide variety of authentic Antonio Masutti art available for sale. You can also browse by medium to find art by Antonio Masutti in lithograph and more. Not every interior allows for large Antonio Masutti art, so small editions measuring 18.389999389648438 inches across are available. Customers interested in this artist might also find the works of Michel Fingesten, Bartolomeo Pinelli and Antonio Fontanesi. On 1stDibs, the price for these items starts at $564 and tops at $564, while the average work can sell for $564.