Arnold Beauvais was born in Lewisham on 13 April 1886, son of a French father, the artist Charles Henri Beauvais, and an English mother, Anne, née Corfield. He trained in his father's commercial art studio during the day, working on lithographic printing and poster design, and took night classes at the Bolt Court Art School in Fleet Street. In 1903, his father returned to his home town of Marseille and set up a commercial art studio. Beauvais studied in Paris for 16 months before joining his father in Marseille. Charles died in 1911 and he took over the studio for two years, then returned to London in 1913, where he opened a studio and produced film posters, magazine illustrations, advertisements, cartoons and jigsaw puzzles. During the 20s he also sang opera, until he had to make a choice which career to pursue full time, and chose art. In 1929, he became a member of The London Sketch Club and was elected as a president in 1936, later becoming a life president. During the 30s he taught at Bolt Court Art School. From 1953–57, Beauvais painted covers for Super Detective Library, and from 1959 to the early 60s he worked on The Children Who Lived in a Shoe' for Jack and Jill, initially coloring Walter Booth's drawings, later producing the complete art himself. From 1956, he scaled down his commercial artwork to concentrate on oil painting. He died in Surrey on 2 April 1984. 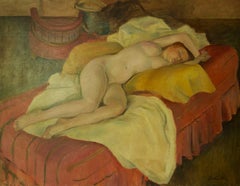 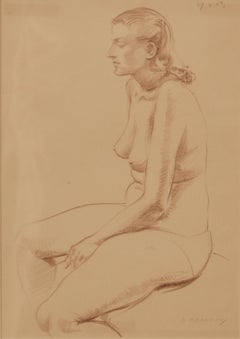 Muriel Archer
Coffee in Tuscany - Early 20th Century Impressionist Piece of a Cafe by Archer, Circa 1935