Augustin de Saint-Aubin was born on January 3rd 1736 into a family of artists: his father Gabriel-Germain (1696-1756) was the King's embroiderer and his six surviving siblings (Charles-Germain (born in 1721), Gabriel-Jacques (1724), Catherine-Louise (1727), Louis-Michel (1731), Athanase (1734) and Agathe (1739)) were also artists. The eldest of the boys, Charles-Germain, became a draughtsman and embroiderer like his father, Gabriel-Jacques? is considered one of the most brilliant draughtsmen of the 18th century, Louis-Michel became a painter at the Sèvres porcelain manufactory and Athanase an actor, while his two sisters were also talented draughtswomen.

During his lifetime Augustin de Saint-Aubin's fame as a draughtsman and engraver far out-shadowed that of his twelve-year-old elder brother Gabriel, but the Goncourt brothers initiated research into the French 18th century art sphere which gave back its pre-eminence to Gabriel’s works.

Initially trained by his brother Gabriel, the young Augustin continued his apprenticeship with the engraver Etienne Fessard (1714 - 1777) and very quickly set his sights on becoming an engraver.

Accepted to the Académie Royale in 1771, he was never admitted because he did not submit his reception piece. This did not prevent him from having a successful and very prolific career as an engraver, since his output is estimated at more than 1,300 engravings.

Portraits - whether drawn or engraved - constitute the best part of his work and also the most sought-after, particularly by the Goncourt brothers, who owned several portraits among the dozen or so drawings of Augustin de Saint-Aubin they had collected/in their collection. 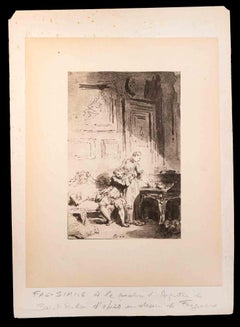 Related Items
Portrait of a Melancholic Woman, a Drawing signed by Léon Bonnat
Located in PARIS, FR
This drawing by Léon Bonnat, the greatest portrait painter of the Third Republic, shows a woman of indeterminate age, caught in a melancholic pose. 1. Léon Bonnat Born in Bayonne, ...
Category

Léon Bonnat
Portrait of a Melancholic Woman, a Drawing signed by Léon Bonnat, Circa 1880

H 6.5 in. W 5.32 in.
Portrait of a Man Holding a Letter, a drawing by Jean-Baptiste Oudry 1686 - 1755
By Jean-Baptiste Oudry
Located in PARIS, FR
This very pretty drawing from a private Parisian collection is typical of Oudry's first period during which he produced a very large number of portraits, at a time when he was still ...
Category

H 8.15 in. W 6.3 in.
A portrait of the Grand Dauphin as Narcissus attributed to Henri Gascar
By Henri Gascar
Located in PARIS, FR
This cabinet miniature is truly an artistic tour de force: in an area of just a few inches, the artist manages to portray Narcissus, who is reflected in the water in the foreground, ...
Category

A portrait of the Grand Dauphin as Narcissus attributed to Henri Gascar , 1679 - 1680

H 5.94 in. W 7.5 in.
Study for « The Chinese Masquerade » by Jean-Baptiste Pierre (1714 - 1789)
By Jean-Baptiste Pierre
Located in PARIS, FR
Arriving in Rome in June 1735 as a resident at the Royal Academy, Pierre was unable to attend the Winter Carnival festivities of 1735, which he nevertheless immortalised in an engrav...
Category

H 13.13 in. W 8.25 in.
A red chalk study sheet by Baldassare Franceschini, known as Volterrano
Located in PARIS, FR
This fresh sanguine sheet presents various studies placed next to each other in no apparent order. Two of the feet studies are preparatory to the first major commission received by t...
Category

H 8.46 in. W 11.81 in.
Soldier Begging for Mercy. Preparatrory Drawing by Jean-Marc Nattier 1717
By Jean-Marc Nattier
Located in PARIS, FR
This rare drawing by Nattier is part of a set of preparatory studies executed in 1717 for one of the painter's first commissions, the painting commissioned by Tsar Peter I of Russia ...
Category

H 6.5 in. W 9.44 in.
Two Angles blowing a red chalk drawing by Charles de La Fosse (ceiling study)
Located in PARIS, FR
In this lively sketch, Charles de La Fosse, who was trained in fresco painting during his stay in Italy, presents us with two angels blowing, probably intended for a ceiling project....
Category

H 4.14 in. W 5.71 in.
Apollo and the Muses, a Renaissance drawing attributed to Girolamo da Carpi
Located in PARIS, FR
This subtle drawing from the Roman Renaissance presents Apollo accompanied by three Muses. It is based on a sarcophagus depicting the nine Muses framed by Minerva and Apollo, which i...
Category

Apollo and the Muses, a Renaissance drawing attributed to Girolamo da Carpi, 1532-1534

1stDibs offers a wide variety of authentic Augustin de Saint-Aubin art available for sale. You can also browse by medium to find art by Augustin de Saint-Aubin in crayon, etching, lithograph and more. Much of this artist's original work was created during the 18th century and is mostly associated with the style of the Old Masters. Not every interior allows for large Augustin de Saint-Aubin art, so small editions measuring 4.690000057220459 inches across are available. Customers who are interested in this artist might also find the works of Hans Sebald Beham, Charles Amand Durand and Utagawa Kunisada III. On 1stDibs, the price for these items starts at $161 and tops out at $4,029, while the average work can sell for $302.

$5,500
Mon Colonel
By Auguste Chabaud
Located in London, GB
'Mon Colonel', pencil and crayon on paper, by noted French artist, Auguste Chabaud (circa 1914-1918). A delightfully simple drawing of a French Army colonel in profile along with clo...
Category

$452 Sale Price
20% Off
sketch of man with pipe and woman with purse
By Jackson Lee Nesbitt
Located in New Orleans, LA
A pencil drawing of a man with a pipe and a woman holding a purse. Nesbitt made numerous pencil sketches as he created his late rural lithographs. While these images are not finished...
Category

Jackson Lee Nesbitt
sketch of man with pipe and woman with purse, 1992

$1,575
Middle Eastern Man with Turban and Blue Cloak in Profile against Yellow
By Joseph Stella
Located in Miami, FL
Portrait in primary blues and yellow of perhaps a Persian man. He is in profile set against a decorative yellow background with floral elements. The work was done two years before ...
Category

$1,750 Sale Price
30% Off
Man and Woman Henry Moore nude figure drawing for W.H. Auden poetry book
By Henry Moore
Located in New York, NY
Printed in inky black, Man and Woman features a rubenesque woman standing in profile to the right of the picture, her hands placed lightly on her stomach. She glances past the viewer...
Category

$2,450
American Expressionist in Paris 1920s Dandy with a Moustache modernist drawing
Located in Norwich, GB
An interesting, strong and masculine work by Clifford Holmead Phillips, the American Expressionist who seems to be better known in Europe than in his native US. His work is all the ...
Category

Price Upon Request
Vintage SIGNED Kitaj Poster, La Fabbrica, Milan (A Life 1975) woman in red dress
By Ronald Brooks Kitaj
Located in New York, NY
Printed in 1975, this poster features the encounter between an alluring woman dressed in red, and a man with his back to the viewer. The light of a streetlamp is beautifully imitated...
Category