Bernard Lorjou was born on September 9, 1908, in Blois, France, a somber village of picturesque houses on the Loire River, 32 miles from Tours. He was the youngest of 3 children and a born painter, indulging in all the childish pranks to obtain crayons and suitable materials to satisfy his strong desire to draw and paint. In 1924, he headed to Paris, where he lived in extreme poverty in a small room on the Rue Raspail. Eventually, his funds ran out, so he started sleeping in the Orsay train station. Within a year, he found work with the silk house Ducharne. He used his income at Ducharne to finance his formal studies at the evening school in Paris. He was taught a kind of 19th-century realism, dark and painstaking. His canvases show brilliant brushwork, filled with an emotional intensity that was to typify countless canvases. At Ducharne, he designed patterns for prints that became sought by fashion houses ranging from Jacques Fath, Balmain, Lanvin and Christian Dior and worn by many notable women of the period, including Marlene Dietrich, Dolores del Rio, Jane Aubert and the Duchess of Windsor. At Ducharne, Lorjou met his wife Yvonne Mottet, also an artist. Mottet taught Lorjou conventional drawing and her influence on his work and life was profound. Her kind, gentle but direct force humanized and appeased his volcanic personality. In 1934, Lorjou and Mottet set up an art studio in Montmartre, Paris. This same studio was featured in the 1996 movie, Everyone Says I Love You. In 1939, Lorjou returned to Blois as German troops began invading France. During his short time as mayor, he recalled housing, treating, burying and feeding many of the town’s citizens. In 1942, he displayed works for the first time at the Salon des Indépendants. Three years later in 1945, Lorjou held his first solo exhibition in Paris at the Galerie du Bac. Less than a year later, the Galerie du Bac held an exhibition dedicated to the emerging style of Expressionist artists from different countries, featuring artists such as Soutine, Rouault, Goerg, Ensor, Beckmann and Lorjou. In 1948, Lorjou was named co-recipient of the coveted Prix de la Critique award with Bernard Buffet. That same year, Lorjou formed the artistic group L’Homme Témoin with the art critic Jean Bouret to defend figurative painting. The group originally comprised 5 members and shortly thereafter expanded to include other artists, including Bernard Buffet, Jean Couty, Minaux and Simone Dat. In 1950, Lorjou painted and exhibited a series of large-format paintings inspired by current events, namely, L'Age Atomique. Today it is owned by the French Government and held at the Centre Pompidou in Paris. Over the next 10 years, Lorjou painted a series of widely acclaimed works now held by major museums worldwide. In 1963, Lorjou rented a barge named La Touraine to navigate up and down the Seine River in Paris for three days. There were several politically-charged monumental paintings on display, including La Mort de John XXIII, Grimau’s Blood and July 14th. Local authorities eventually stopped the barge. In 1965, Lorjou created woodblocks from his illustrations Le Bestiaire ou Cortège d'Orphée by Guillaume Apollinaire, which was published by Editions d’Auteuil and printed by Robert Blanchet in an edition of 230 copies. In 1968, his wife and companion of 40 years, Yvonne Mottet, passed away from leukemia. Throughout the 70s and 80s, Lorjou created iconic works and exhibited them throughout the globe. These included acclaimed exhibitions, such as “The Sharon Tate Assassination," “Bullfights” and “Lorjou in Private French Collections.” In 1985, The Palais de l'Europe organized a retrospective on Lorjou. The same year, Lorjou organized his last exhibit in Paris with a series of tarps around the theme of AIDS. On January 26, 1986, the last day of his AIDS exhibit, Lorjou died of an asthma attack. Posthumous exhibits were held in Venezuela and Japan.

La Carpe, Fish on Table Still Life
By Bernard Lorjou
Located in New York, NY
In the tradition of Van Gogh, Picasso, Soutine and Buffet, Lorjou has a strong identity as an artist. This expressive and painterly still life of a fish would be a masterful additio...
Category 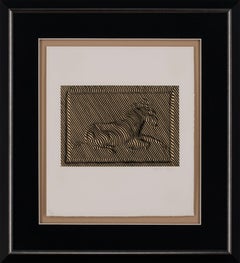 H 14 in. W 10 in. D .0875 in.
nature morte
By Bernard Lorjou
Located in Nice, FR
Wonderful painting by the french painter Lorjou: an abstract still life with flowers. Bernard Lorjou (September 9, 1908 – January 26, 1986) was a French painter of Expressionism and ...
Category