Bijan Choudhury was born in Faridpur, Bangladesh. He moved to Calcutta, where he studied at the Government College of Art and Craft, but because of his Marxist beliefs, he was expelled before he could graduate. Choudhury returned to Bengal and graduated from the Dhaka Art College (now the University of Dhaka). Choudhury was one of the artists that formed the Society of Contemporary Artists in 1960. In 1964 together with Nikhil Biswas, Prakash Karmakar, Rabin Mondal, Jogen Chowdhury and Dharaj Chowdhury, he founded the Calcutta Painters to break from the traditions of the Bengal School of Art. In the late 70s, he became head of the Indian College of Art and Draftsmanship. Choudhury has had several exhibitions. He received “Abanindra Puroshkar,” Government of West Bengal, Calcutta. He received the “William Carey Award” in 1955, Academy of Fine Arts Award, Calcutta in 1963, “Rabindra Bharati Award,” Calcutta and Documentary colored film entitled Bijan, made by Film Australia, Film Division of Government of Australia in 1978. After his death, an exhibition of his paintings was arranged by the Bengal Gallery of Fine Arts at the Bengal Gallery in 2012. 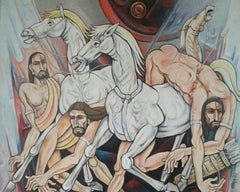 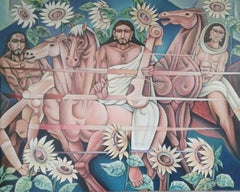 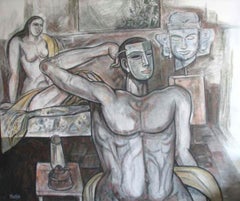 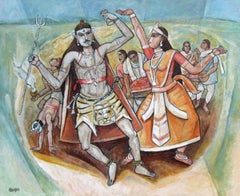 The Owl, Acrylic, Charcoal and Oil on Board by Modern Artist "In Stock"
By Shuvaprasanna Bhattacharya
Located in Kolkata, West Bengal
Category

Shuvaprasanna Bhattacharya
The Owl, Acrylic, Charcoal and Oil on Board by Modern Artist "In Stock"

feroz-khan
Untitled, Acrylic on Canvas by Contemporary Artist "In Stock"

feroz-khan
Untitled, Acrylic on Canvas by Contemporary Artist "In Stock"

dinkar-jadhav
Celebration, Acrylic on Canvas, by Contemporary Artist "In Stock"