Charles Emile Jacque was born in 1813 in Paris. He was part of the first generation of painters to leave Paris for Barbizon and the forest of Fontainebleau. Jacque was also a founding and influential member of the “Men of 1830” (also called L'école Française De Paysage), an artistic movement who, spurred on by the Revolution of 1830, sought out new directions in landscape painting. His strong, realistic, yet sensitive depictions of shepherds and their flocks form one of the most cohesive and important bodies of work produced by the movement. During the 1840s, he and his friend, Jean-François Millet moved to the village of Barbizon where they felt they could more realistically portray nature. Jacque bought a house there and was influenced by Narcisse Diaz’s technique and Millet’s themes, he found his inspiration in hen-houses, pigsties and flocks of sheep at pasture. He left Barbizon in 1854 and continued to paint in the outskirts of Paris until he died on May 7, 1894. Works by his hand are held by numerous museums such as the Baltimore Museum of Art, Isabella Stewart Gardner Museum in Boston, Cincinnati Art Museum, National Galleries of Scotland in Edinburgh, Gallery of Modern Art in Glasgow, Minneapolis Institute of Arts, Metropolitan Museum of Art in New York, Ashmolean Museum of Art and Archaeology, and Philadelphia Museum of Art and, of course, at the Musée du Louvre and Musée d’Orsay in Paris. 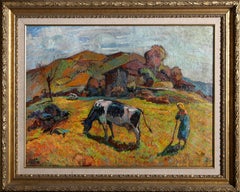 Reginald Wilson
Cat and Birds, circa 1950

H 2.21 in. W 2.68 in.
Soleil du Matin dans la Bergerie
By Charles-Emile Jacque
Located in Wiscasset, ME
Born in 1813 in Paris, Charles Emile Jacque began his training in etching as an apprentice to a map engraver. By 1833 he was painting and debuted at the Paris Salon where he contrib...
Category