Christine Chatwell began her study of painting in the late 1970s at the Fort Mason Art Center in San Francisco. She studied the art of portraiture and continues to enjoy painting portraits of people and animals. One of her primary influences was the German Expressionist style of painting, especially that of August Macke and Wassily Kandinsky. She is excited and fascinated by their use of abstraction, intense color and simplified forms. These qualities are predominant in her paintings. Chatwell's style is essentially that of an abstract colorist. Fauve painters such as Andre Derain, Henri Manguin and Albert Marquet also influenced the artist. She is attracted to their boldness and non-conformity, which is reflected in their use of strong light, high key, saturated color, and thick impasto. Chatwell frequently paints nocturnal scenes in which the center of interest is a small area of light, expressing her experience of a higher power, always available to guide one out of danger and despair. She was influenced by Whistler's style of nocturnal painting.

In the 1990s, Chatwell studied with master painter Michael Linstrom, who encouraged her to trust and follow her intuitive style of painting from the inside out, thus affirming her deep love of self-expression. Mr. Linstrom and Chatwell now often exhibit their paintings together. The artist spends a few weeks in Paris every year. She paints Parisian street scenes and interiors to express her love of the ambiance and architecture of the city. She particularly enjoys painting scenes in which people are depicted doing ordinary, everyday activities. Chatwell loves the process of painting so much that she spends every spare minute at the easel. She becomes absorbed to such a degree that she loses track of time and often paints for hours without once leaving the studio. While performing the necessary chores and tasks of daily living, she is calculating the amount of time that will elapse before she can to return to her beloved passion.

Portrait of the Artist
By Christine Chatwell
Located in Soquel, CA
Category 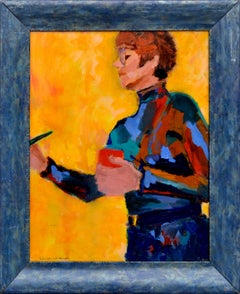 Christine Chatwell
Portrait of the Artist, 1990

Christine Chatwell
Portrait of the Artist, 1990 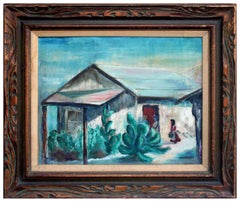