Finis Collins was one of the founding members of the Watercolor Gang, a Director of the San Antonio School of Art and president of the Artist and Designers Society. For many years Collins was an instructor at Trinity University, the Jewish Community Center of San Antonio and the San Antonio Art Institute. After his Honorable Discharge from the Air Force, Collins Joined the Pitluk Group in 1953 and worked for them until he retired in 1988 as Sr. Art Director. Collins designed the Major Brochure for Hemisfair-1968. This elaborate brochure was printed in large quantities and was distributed throughout the world. His most noted piece of art that has been seen by millions is the symbol that he created for the San Antonio Spurs. Collins developed many corporate symbols including those for Zachry, La Quinta, Market Square and many more advertising designs. Collins loves helping developing artists. For over 25 years, Collins spent his evenings as an Instructor of Art. Collins was the Owner and Director of the San Antonio School of Art. (1964–68) At one time, Collins directed a staff of 13 teachers covering every facet of Commercial and Fine Art.

Collins was an Instructor of Advertising Art and Design at Trinity University. Collins also instructed at the San Antonio Craft Center and the San Antonio Art Institute. For over a dozen years Collins held Watercolor Classes in Fine Art at the Jewish Community Center. Collins now paints full time. Although Collins is well known for his transparent watercolors, he is also proficient in brush and pallet knife in oils on canvas. Collins has held the Office of President of the Artist and Designers Society (1964) and the President of the Texas Watercolor Society (2003). Collins has earned, through his many awards in fine art, the honor of wearing the prestigious TWS Purple Sagebrush Pin. Collins has been honored by many Art Galleries with numerous Shows. Collectors throughout the world have purchased his original paintings and Limited Edition Prints. Collins is one of the Founding Members of the Watercolor Gang. (Established over 43 years ago) The gang has painted America from coast to coast, Europe five times and Mexico many times. These five artists are considered one of the oldest and finest Plein Air painting groups in America. Collins and his artist wife, Edie love to travel and paint together. They have toured and painted in over one dozen countries in Europe and traveled in their RV they have painted, (except for six states) all of the Continental United States. 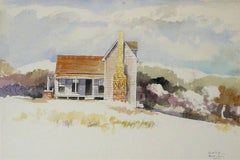 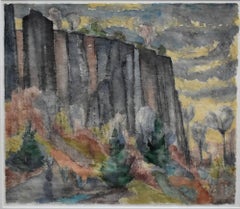 fred-darge
"Down By The Rio Grande" Texas Cowboy Western Scene