George Elbert Burr was an American printmaker and painter best known for his etchings and drypoints of the desert and mountain regions of the American West. He enjoyed success early, providing illustrations for Harper's, Scribner's Magazine, Frank Leslie's Weekly, and The Cosmopolitan. In 1892, he began a four-year project illustrating a catalog of Heber R. Bishop's collection of jade antiquities for the Metropolitan Museum of Art. This project, producing etchings of over a thousand artifacts, paid well enough for Burr to embark on an extended tour of Europe upon its completion with his wife. Over the next five years, as they traveled in Italy, Germany, and the British Isles, Burr amassed sketches and watercolors that would provide the source material for his copper plate etchings of European scenes. In 1924, the Burrs settled in Phoenix, Arizona, where he would remain for the rest of his life. The change of scenery allowed him to round out his oeuvre of Western landscapes with expansive views of the Sonoran and Mojave deserts. He and his wife, who died in 1941, are buried in Cameron. Today, George Elbert Burr is widely considered to be one of the finest of the early 20th-century American etchers. His prints are in several prominent collections including the Smithsonian American Art Museum, the British Museum, the French National Print Collection, Luxembourg Gallery, Victoria and Albert Museum, the New York Public Library, Brooklyn Museum, Museum of Northern Arizona and the Congressional Library in Washington, D.C.

George Elbert Burr
Soapweed, Arizona (no. 2); edition of 40 (original etching from the Desert Set), circa 1924 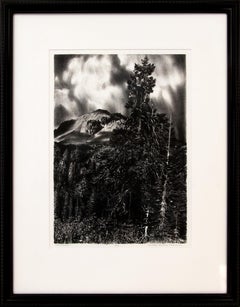 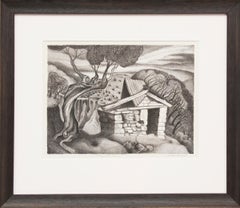