Architect and printmaker, Louis Conrad Rosenberg was born in Portland, Oregon. The recipient of a scholarship awarded by the Architectural Club of Portland, Rosenberg attended the Massachusetts Institute of Technology. Graduating in 1914, Rosenberg was granted a traveling fellowship in architecture and after the war he traveled throughout England, Europe, the Near East and Northern Africa, creating thousands of sketches. Rosenberg began his first experiments in etching while studying at the American Academy in Rome, in 1921, and has given an exhibition there. His prints came to the attention of Muirhead Bone, who looked him up during a visit to New York and suggested that he pursue etching more seriously. Soon after that meeting, Rosenberg entered the school of engraving at the Royal College of Art in London, making 20 distinguished plates in a year and launching his career as a printmaker. On his return to the United States, he took up a teaching position in architectural design at the University of Oregon. Etching for the American Etchers Series, he was commissioned to render the existing sites, new structures and demolitions of the Cleveland Railroad Terminal. In 1930, Rosenberg undertook a similar commission for the Cincinnati Union Terminal that produced some of his finest work. In 1946, he joined the New York architectural firm of Sawyer and York and remained there until retiring. Widely respected for his impeccable drypoint technique, flawless composition and sensitive architectural renderings, Rosenberg was the recipient of many medals and awards. He was an emeritus member of the American Institute of Design and senior fellow in the Royal Society of Painters, Etchers and Engravers. Rosenberg was also a member of the Brooklyn Society of Etchers, Chicago Society of Etchers, Philadelphia Society of Etchers and Engravers Associates and the Chelsea Arts Club, London. Rosenberg received a silver medal from the Printmakers Society of California, 1924. 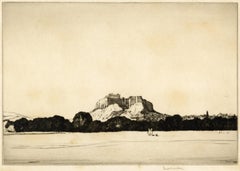 H 20 in. W 24 in. D .5 in.
John Winkler, View from Colby Meadows
Located in New York, NY
Winker is pulling out all the stops to make as stunning a Western Landscape as possible. The sky in this impression is open. There are also impressions with clouds in the sky. Sign...
Category

Albert Dorne
Original "Me Travel? not this summer Vacation At Home vintage poster 1945, 1945

H 9.875 in. W 7.875 in.
Armin Landeck, Window on 14th Street
By Armin Landeck
Located in New York, NY
The reference number on this work is Kraeft 103. It's from an edition of 100 and is signed, dated, and numbered, in pencil. Always an intaglio printmaker, Landeck switched from a mo...
Category

1stDibs offers a wide variety of authentic Louis Conrad Rosenberg art for sale. You can also browse through art by Louis Conrad Rosenberg in drypoint, engraving and more by medium. Much of the original work by this artist or collective was created during the 20th Century and is mostly associated with the Modern style. Not every interior allows for large Louis Conrad Rosenberg art, so small editions measuring 7.630000114440918 inches across are available. Customers interested in this artist might also find the works of Kenneth Hayes Miller, George Elbert Burr and George Biddle. On 1stDibs, the price for these items starts at $475 and tops out at $2,200, while the average work can sell for $700.