From sneaking into art classes to setting up a studio in an abandoned pier, Guy Dill’s journey toward becoming a celebrated contemporary American sculptor is anything but conventional.

Dill’s first love was the sea. Intending to travel the world by boat, the Malibu, California native began a career working for the U.S. Coast Guard during the Vietnam war. In his time off, he visited his brother, Laddie John Dill, who was attending the renowned Chouinard Art Institute in Los Angeles and unofficially joined his life drawing classes after an instructor pressed him to bring a sketchpad. Dill enjoyed the classes and eventually accumulated enough work to submit to Chouinard for application.

After graduating from Chouinard with a bachelor's degree in painting in 1967, Dill put down the brush but continued to draw. Attracted to the Venice Beach lifestyle, Dill set up a studio with some fellow artists in an abandoned space on the Pacific Ocean Park (POP) pier. Located a few miles south of the now-famous Santa Monica pier, the POP pier slowly deteriorated under Dill’s feet while he began his sculpting career.

During the late 1960s, Irving Blum’s influential Ferus Gallery was the epicenter of L.A.’s art scene. Blum discovered Dill’s sculptures and put him in a group show with other exciting new talent from the area. Artists such as Ed Ruscha and Roy Lichtenstein had begun to make their names at the gallery, and the exposure proved important for Dill. Today he works in cardboard, glass, bronze, wood and more, and his large-scale abstract sculptures are known all over the world.

In 1972, Dill was awarded the Theodoron Award from the Guggenheim Museum in New York and First Prize at the Chicago Institute of Art’s “American Show” in 1974. Additional accolades include the California Heritage Museum Artist’s Award, the Stars of Design Lifetime Achievement for Art Award from the Pacific Design Center in Los Angeles and more.

Dill’s work is held in the collections of the Museum of Modern Art, the Whitney Museum of American Art, the Smithsonian Institution, the Guggenheim and the Stedelijk Museum. 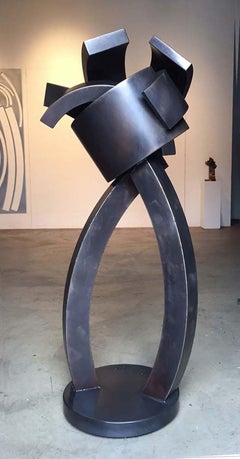 Boon
By Guy Dill
Located in Santa Fe, NM
Boon is a 2008 bronze sculpture by Guy Dill. The refinement and poise of Guy Dill's bronze work is effortlessly balanced with the industrial and modern feel of the metal sculpture. B...
Category

H 24 in. W 8 in. D 6 in.
Knot #92B 3/7
By Damon Hyldreth
Located in Napa, CA
The sculptures of Damon Hyldreth appear both static and fluid, rigid and flexible, strong and smooth, effectively blurring the line between nature and structure. By crafting organic ...
Category 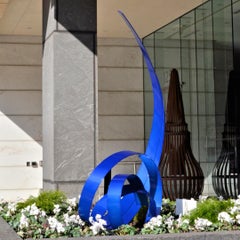 H 81 in. W 48 in. D 24 in.
Polychrome Bronze Organic Sculpture Polich Tallix Art Foundry Sleeping Beauty
By Robert Kushner
Located in Surfside, FL
Robert Kushner, born in 1949, in California, lives in New York, and is a painter and sculptor. He gained attention in the early seventies as a performance artist, using food, fabric ...
Category

Free Shipping
H 25.6 in. W 23.63 in. D 13.78 in.
Prima Donna, 21st Century Contemporary Bronze Horse Sculpture Frans van Straaten
By Frans van Straaten
Located in Nuenen, Noord Brabant
Frans van Straaten (1963) should be called an artist of balance always searching for harmony between force and movement in combination with space. Because of the wide range in his ar...
Category

H 74.81 in. W 35.44 in. D 35.44 in.
Dancer- 21st Century Contemporary Brass Sculpture
Located in Nuenen, Noord Brabant
Jan Wils is an artist born in the city of Eindhoven, in The Netherlands. He now still lives and works in Eindhoven. Jan Wils about his sculptures: “The objects I make are interact...
Category

H 11.5 in. W 11.5 in. D 1 in.
Caballo Arroyo (Bronze horse sculpture by Frank Arnold)
By Frank Arnold
Located in Fresno, CA
Frank Arnold is thought by many to be one of the foremost abstract figurative painters and sculptors of our time. He is a living master whose work is considered to be both personal a...
Category

H 22 in. W 8 in. D 32 in.
Albert
By Craig Campbell
Located in Loveland, CO
Albert by Craig Campbell Expressionistic Figurative Sculpture 12x4x3" Bronze edition of 25 ABOUT THE ARTIST: Craig Campbell began sculpting more than 25 years ago and received his B...
Category

H 12 in. W 4 in. D 4 in.
Neuvoa
By Frank Arnold
Located in Fresno, CA
Frank Arnold is thought by many to be one of the foremost abstract figurative painters and sculptors of our time. He is a living master whose work is considered to be both personal a...
Category

H 52 in. W 75 in. D 33 in.
Strongs
By Guy Dill
Located in Park City, UT
Powder coated aluminum. Guy Dill is a renowned American abstract sculptor; his bronze and aluminum sculptures, while not figurative, often suggest the lines, curves, and lithe swoops...
Category

H 63 in. W 40 in. D 21 in.
Belay
By Guy Dill
Located in Park City, UT
Guy Dill is a renowned American abstract sculptor; his bronze and aluminum sculptures, while not figurative, often suggest the lines, curves, and lithe swoops of bodies and movement ...
Category

H 72 in. W 36 in. D 32 in.
Zanza
By Guy Dill
Located in Park City, UT
Guy Dill is a renowned American sculptor. Both his bronze and marble sculptures while not figurative, often suggest the lines, curves and lithe swoops of bodies and movement itself. ...
Category

1stDibs offers a wide variety of authentic Guy Dill sculptures for sale. You can also search for art by Guy Dill in metal, steel, bronze and more by medium. Much of this artist's original work was created during the 21st Century and Contemporary, and is mostly associated with the Abstract style. Not every interior allows for large Guy Dill sculptures, so small editions measuring 14 inches across are available. Customers interested in this artist might also find the works of Zammy Migdal, Brady McLearen and Louise Nevelson. On 1stDibs, the price for these items starts at $30,000 and tops out at $79,000, while the average work can sell for $35,000.