Henry John Boddington was an English landscape painter during the Victorian era and a member of the Williams family of painters. Boddington was born on 14 October 1811 in London. He was the second son of the painter Edward Williams (1781–1855) and Ann Hildebrandt (1780–1851), who was related to such famous artists as James Ward, R.A. and George Morland. His father was a well-known landscape artist, who taught him how to paint, otherwise, he received no formal instruction.

(Biography provided by The Benjaman Gallery)
Applied Filters2 results
Creator:Henry John Boddington
to
Item Ships From
2
Height
to
Width
to
2
2
9,813
2,534
1,934
1,597
2
2
1
1
The Thames near Hampton - 19th Century English River Landscape Oil Painting
By Henry John Boddington
Located in Gerrards Cross, GB
A fine and highly detailed 19th century oil on canvas depicting a woman near a cottage and various figures in punts on ‘The Thames near Hampton’ by the important Victorian landscape ...
Category 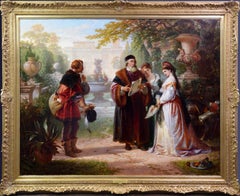 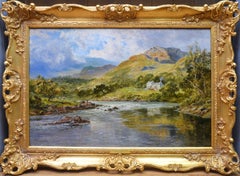