Hermès has come a long way since it was founded in 1837 by Thierry Hermès as a saddle manufacturer. By 1880, Hermès’s son Émile-Charles introduced equestrian accessories, including fine riding gear, into the French brand’s mix. More than a century later, the luxury house’s empire now includes pillows, cotton and cashmere throw blankets and more.

Most may know Hermès for its universally renowned handbags and purses, such as its iconic Birkin, but the brand’s celebrated status extends into a variety of areas, including fashion, fragrance, jewelry, luxury home goods and, still to this day, custom saddles. And its textile legacy plays no small role in Hermès’s long-standing reputation for producing elegant and durable design.

Thierry Hermès was born a French citizen in Krefeld, Germany, which earned the nickname the “city of velvet and silk” for its history as a textile-trading town. How appropriate, then, that his brand would go on to be well-known for its silk scarves. But while silk does make an appearance in Hermès’s home-furnishings collection, its pillows and throws — the latter often framed in fringe or whipstitch edges — are made from a wide variety of materials, including merino wool, cashmere and even Mongolian yak. 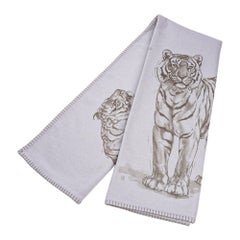 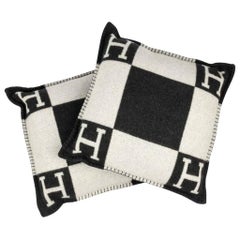 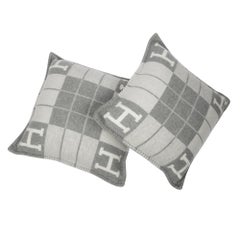 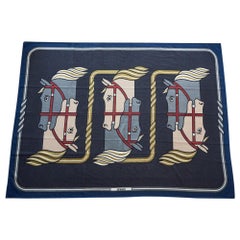 W 55 in. L 66 in.
Hermès Avalon III Throw Blanket in Ecru and Black Merino Wool and Cashmere
By Hermès
Located in Paris, FR
Hermes Avalon III plaid or throw blanket in écru and black merino wool and cashmere 90% wool and 10% cashmere. Made in France. New condition. Dimensions: 135 x 170 cm Will be del...
Category

Hermes Blanket
By Hermès
Located in New Hope, PA
A wool & cashmere blanket in the traditional Hermes H pattern is done in camel and taupe. The color scheme revereses on the oppposite side. The balnket is in excellent condition.<br ...
Category