Born in Petersburg, Virginia in 1867, Jerome Myers became an important painter of urban realism, starting with a series of images of ghetto life in 1887, the year he began studying at the Cooper Union. One of his earliest works is Backyard from that year, in a private collection, which already shows a raw, unidealized view of New York City. Thus, he actually anticipated the productions of the Ashcan School. Myers continued his studies at the Art Students League where his teacher was George de Forest Brush, the academic painter of idealized Native Americans. Brush's classicism did not rub off on Myers, who had no patience for careful drawing. He was even disturbed by the presence of a studio model, so he completed a series of self-portrait drawings to satisfy the faculty's requirements. For Myers, the academic experience was too imitative. However, he stayed around for eight years. Like artists of the Ashcan School, Myers went directly to the streets of New York for inspiration. He carried a 9x11 inch sketch pad wherever he went, like a "day and night prowler in and out of the crowds," explained Guy Pène du Bois. By 1895, Myers found a position in the New-York Tribune's art department. Probably because of academic indoctrination, Myers thought it was necessary to travel to Paris. There, he shared a room with Solon Borglum and noted the pathetic ruins of American students who had lingered too long. Myers realized the trip was not really that helpful and returned to America. "I asked myself what Paris could give, and the answer was 'Nothing’" Later in a newspaper article, Myers was extolled as "the only artist of consequence in the United States, possibly, who had no European training." He met the influential art dealer William Macbeth, who agreed to exhibit his art and the painter noted ". . . almost overnight, I had become a professional artist," thanks to this encounter. This led to various exhibitions, including the St. Louis World's Fair in 1904, where his painting Night Concert won a bronze medal. In 1908, Macbeth gave Myers his first one-man show in January, a month before the famous exhibition of Robert Henri's group The Eight. In many respects, the style of Myers paralleled the gritty urban realism of Henri, George Luks, John Sloan, Everett Shinn, Theresa Bernstein and William Glackens. Although Myers was a friend of Henri, he was not part of the group because Henri regarded Myers's art as too sentimental. Sloan thought it was more a question of Myers being roughly the same age as Henri and thus could not have been a disciple. Myers did, however, participate in the "Exhibition of Independent Artists" in 1910, which Henri and his colleagues organized. Then Myers hosted a group in his studio that was to become the American Association of Painters and Sculptors (AAPS), the group responsible for the Armory Show in 1913. Myers, who exhibited two paintings there along with fifteen drawings, was dismayed that the European art in the show attracted the most attention. In addition, the work turned out to be radical modernist-oriented, excluding the contemporary realists entirely. Myers returned to the streets of New York, especially the places where immigrants gathered on the Lower East Side. He noted, when the immigrants "merge here with New York, something happens that gives vibrancy I didn't get in any other place." He also depicted the moment of leisure, for example, at the East River Pier and night concerts in the parks. Myers relished in the outdoor activities of New Yorkers, and at the end of his life, he regretted a new distrusting atmosphere in which people tended to stay more at home: "Something is gone. Something is missing." I say to myself, "It is the warmth of human contact. New Yorkers no longer live in the open." Myers continued to exhibit and win prizes, five at the National Academy of Design. His works are to be found in major American museums. 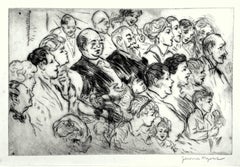 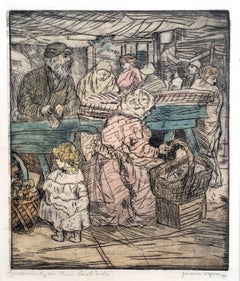 Jerome Myers
Morning on the East Side 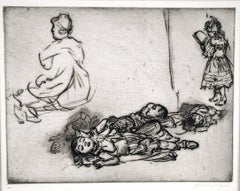 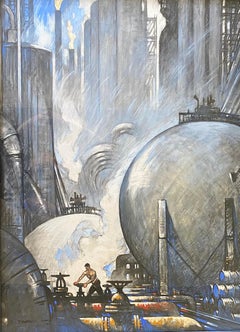 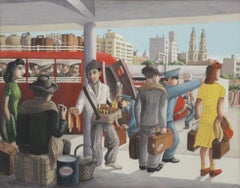 Out of the Sun (Under the Racetrack Grandstand), Saratoga Springs, Anne Diggory
By Anne Diggory
Located in New York, NY
Category

Anne Diggory
Out of the Sun (Under the Racetrack Grandstand), Saratoga Springs, Anne Diggory, 1978

Previously Available Items
Sand Circle
By Jerome Myers
Located in New York, NY
Besides being one of the organizers of the famous Armory Show of 1913, Jerome Myers was a wonderful interpreter of New York City life -- it's children included. The charmingly named ...
Category