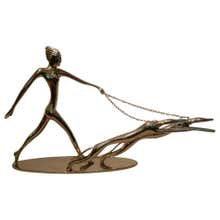 1920's Bronze Bust of a Woman by Karl Hagenauer

Patinated Bronze Sculpture of a Deer by Hagenauer
By Karl Hagenauer
Located in Pittsburgh, PA
This whimsical sculpture of a stag is from the famed Werkstatte Hagenauer Wien.
Category

Patinated Bronze Sculpture of a Deer by Hagenauer

Karl Hagenauer Mid-Century Brass Umbrella Stand, Austria, 1950s
By Karl Hagenauer, Werkstätte Hagenauer Wien
Located in Vienna, AT
A beautiful modernist umbrella stand from the 1950s made of brass and a base made of cast iron. Designed and executed Atelier Hagenauer, Vienna, Austria. In very good condition with ...
Category

Austrian, 20th Century, Hagenauer Brass and Metal, Locomotive, in Black
By Karl Hagenauer, Werkstätte Hagenauer Wien
Located in Vienna, AT
A rare model of a locomotive, handmade of metal and brass by Werkstatt Hagenauer Vienna in the 1920s. Marked on its bottom WHW, Hagenauer Wien, made in Austria, handmade. Very nice p...
Category

Seldom Seen Art Deco Occasional Table by Hagenauer for Rena Rosenthal
By Rena Rosenthal, Karl Hagenauer
Located in Buffalo, NY
This lovely table was cast with incredible detail and is stamped RWR for Rena Rosenthal Werkstatt. She often commissioned Hagenauer to make pieces for her, which is well documented.,...
Category

Karl Hagenauer Watering Can Copper & Brass, Vienna 1950s
By Werkstätte Hagenauer Wien, Karl Hagenauer
Located in Basel, BS
Karl Hagenauer watering can for his own workshop in Vienna, in the 1950s. Hand-made of copper and brass, patinated over the years. Oxidation spot on one side. Measures: Width: ...
Category

Karl Hagenauer Brass and Black Metal Bowls or Sculptures Vintage Set of Four
By Karl Hagenauer
Located in North Miami, FL
This lovely set by Karl Hagenauer four low bowls, dishes or sculptures definitely have a fish motiff. They have black metal over brass surrounded by polished brass. They are small bu...
Category

Side Table by Julius Jirasek for Hagenauer Wien

Karl Hagenauer furniture is available for sale on 1stDibs. These distinctive objects are frequently made of metal and designed with extraordinary care. In our Karl Hagenauer collection, there are many options to choose from, although brown editions of this piece are particularly popular. In-stock we have 46 vintage editions of these items, while there is also 0 modern edition to choose from. Many original furniture by Karl Hagenauer was created in Europe during the 20th century in the Mid-Century Modern style. If you’re looking for additional options, many customers also consider furniture by Bruno Zach, Franz Hagenauer and Stefan Dakon. The prices for Karl Hagenauer furniture can vary depending on size, time period and other attributes. 1stDibs's price starts at $450 and tops out at $22,000, while pieces like these can sell for $1,842.