Mario Russo, a Neapolitan artist, moved to Rome, Trastevere, in 1950. In these years, he began to exhibit in Italy and abroad. In 1953, he stayed in Paris and in 1960 in London with his own exhibition. Another exhibition in Monaco of Bavaria in 1965, three years later, in 1968, held two exhibitions in New York and accepted the invitation to exhibit his works at the Royalton College in 1970 Vermont. In 1970, he was enchanted from Sardinia and then decided to live there four months every year. His master is conquered by the sense of beauty, which is synonymous with the female body’s pervaded sensuality. In 1977, during a stay in Canada, he obtained new ideas on the man-machine relationship, which was always inherent in his paintings. In 1979, he was invited by the Italian Institute of Culture of Toronto to exhibit his works at Sudbury University. In 1981 in Florence, he was impressed by the Riace Warriors that inspired him to create a new series. In 1985, he devoted himself to his studies and construction of major works inspired by the world of cinema and the Fellinian characters: the director and with him, the atmosphere of his masterpieces enters in his paintings and is flattered by that event. In 1986, he performed a series of designs on the World of Greek and Roman sculpture of the museum in Naples. The following year is present in Washington with an exhibition dedicated to Federico Fellini. In 1989 in Porto Cervo, Russo exhibited a series of paintings dedicated to the beloved Sardinia. In 1991, he performed a series of paintings on the Gulf war and the plight of the Kurds and in the same year the study of a composition consisting of a group of figures in a garden was conducted. This was a positive sign of the evolution of his creative language that wanted to be the realization of a vision of the world of flowers compared with elements of classical art.

(Biography provided by Wallector)
Applied Filters3 results
Artist:Mario Russo
to
Item Location
3
2
1
3
Overall Height
to
Overall Width
to
3
3
3
3
11,634
3,147
2,532
1,919
3
The Painter and the Model - Original Lithograph by Mario Russo - 1988
By Mario Russo
Located in Roma, IT
Image dimensions: 40x60 cm. The painter and the model is an original colored lithograph on paper realized by the Italian artist Mario Russo (1925-2000) A beautiful original print r...
Category

Mario Russo
The Painter and the Model - Original Lithograph by Mario Russo - 1988, 1988 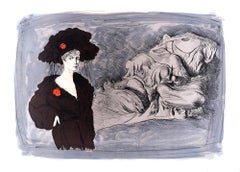 The Actress - Original Lithograph by Mario Russo - 1988
By Mario Russo
Located in Roma, IT
Category 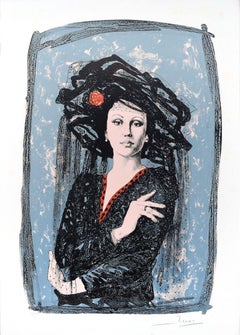 Letter I - Original Lithograph by Raphael Alberti - 1972
By Rafael Alberti
Located in Roma, IT
Category

Mario Russo
Portrait of an Italian Woman by Mario Russo, 1963

H 26 in. W 28 in. D 3 in.
"Testa con girandola"
By Mario Russo
Located in Lake Worth, FL
Oil on wood panel, signed and dated 1957 Mario Russo (1925-2000) Italian painter and graphic designer known for his figurative modern subjects. During his lifetime, his work was e...
Category