Mimmo Rotella was an Italian artist and poet who is best known for collages made from torn advertising posters in a medium that he called "double décollages."

Rotella was born on October 7, 1918, in Catanzaro, Italy, and studied at the Accademia di Belle Arti in Naples before moving to Rome in 1945. There, he became associated with the Lettrism movement and — along with Raymond Hains, Jacque Villeglé and François Dufrêne — became known as one of "Les Affichistes," an artist group credited as the forefathers of street art.

Rotella's first solo exhibition was held in 1951 in at the Galleria Chiurazzi in Rome, and later that same year, he was awarded a Fulbright Scholarship with which he traveled to Kansas City University. In 1961, he was invited by Pierre Restany to join the New Realism movement, whose members included Yves Klein, Arman and Jean Tinguely. In 1964, he represented Italy at the Venice Biennale. He died on January 8, 2006, in Milan, Italy, at the age of 87. 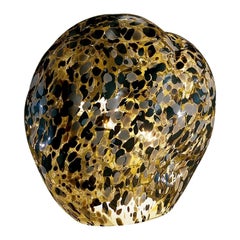 21st Century Replicanti Table Lamp in Sapphire by Mimmo Rotella
By Mimmo Rotella, Venini
Located in murano, IT
These works by Mimmo Rotella have squared heads and wear masks or goggles to clearly see the world around them. They observe it, with a seraphic, slightly sorrowful look on their fac...
Category 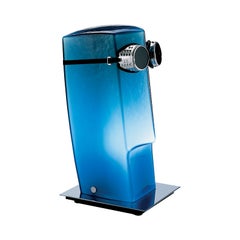 21st Century Replicanti Table Lamp in Red by Mimmo Rotella
By Mimmo Rotella, Venini
Located in murano, IT
These works by Mimmo Rotella have squared heads and wear masks or goggles to clearly see the world around them. They observe it, with a seraphic, slightly sorrowful look on their fac...
Category 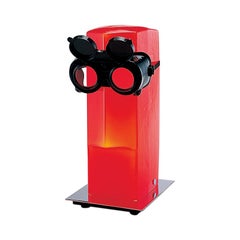 H 31.89 in. W 89.77 in. D 14.18 in.
Previously Available Items
2004 Rare Mimmo Rotella and Marco Ferreri Decollage Artcurial Zerodisegno #2/4
By Mimmo Rotella
Located in Palm Springs, CA
This rare and unique cube is from an edition of only four pieces. We have seen cabinets and small tables but never this from. It is also finished on the base. Ir is a technique of de...
Category

Furniture Mimmo Rotella are available for sale on 1stDibs. These distinctive objects are frequently made of metal and designed with extraordinary care. In our Mimmo Rotella collection, there are many options to choose from, although black editions of this piece are particularly popular. In-stock we have 1 vintage editions of these items, while there is also 0 modern edition to choose from. Many of Mimmo Rotella's original furniture was created in modern style in Italy during the 21st century and contemporary. If you are looking for additional options, many customers also consider furniture by Gruppo Alchimia, James Irvine and Pinuccio Borgonovo. Prices for Mimmo Rotella furniture can vary depending on size, time period and other attributes. The price for these items starts at $578 and tops out at $25,327, while pieces like these can sell for $5,986 on average.