Remo Michael Farruggio created his artwork surrounded by the generation of the Abstract Expressionists, yet the artist chose to pursue an aesthetic direction all his own. Born in Palermo, Sicily, Farruggio attended the Galileo Galilei private school until age 12, at which time, he and his family emigrated to the United States, settling in New York City, attending public school and enrolling in evening classes at the National Academy of Design. In 1922, the artist attended classes at the Educational Alliance, where he met other prominent artists of the day, including Robert Motherwell, Chaim Gross and the Soyer brothers. Farruggio then attended the Beaux-Arts School and the Industrial Arts School, where he was taught by the marine painter, Abraham Bogdanov. In 1924, the artist became an American citizen and set out to explore the United States, painting, exploring and learning. At the turn of the century, the Great Depression set in. The US Government initiated the Works Progress Administration (WPA) and the WPA Artists Project. Farruggio took part in the project and ultimately, was one of two artists chosen for a one-man show, which took place in 1939, at the Julien Levy Gallery in New York City. In the years to follow, Farruggio traveled extensively throughout Mexico, the United States and Italy, where he was highly respected and exhibited his work frequently. Beginning in 1964, Farruggio spent his summers in Provincetown, Massachusetts, an artist community where he developed many important relationships in the art world. From the late 1930–81, he painted several teaching posts and was honored with no less than 20 one-man shows and 25 group shows, winning several important awards along the way. Farruggio's style ranged from representational to semi-abstract to surreal to non-objective. Some of his subject matter included dark, nocturnal, abstracted landscapes or sunlit, atmospheric scenes. Viewing his works, one gets the sense that the artist painted with modesty, grace, elegance and control. Farruggio was a member of the Artists Equity Association of New York, National Academy of Design and Provincetown Art Association. His works are included in the permanent collections of more than a dozen museums, including the Metropolitan Museum of Art in New York City and National Museum of American Art at the Smithsonian Institution, as well as numerous private collections in the US and abroad. 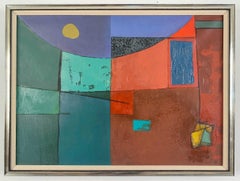 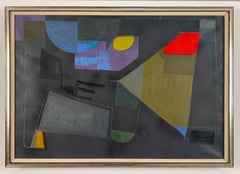 After a Summer in the South of France
By Michiel Gloeckner
Located in Sheffield, MA
Category

Michiel Gloeckner
After a Summer in the South of France

Martinique No. 2
By Michiel Gloeckner
Located in Sheffield, MA
Category