Thomas Moran was born in 1837 in Bolton, England. He was an American painter and printmaker of the Hudson River School in New York, whose work often featured the Rocky Mountains. Moran and his family took residence in New York, where he obtained work as an artist. A talented illustrator and exquisite colorist, he was hired as an illustrator at Scribner's Monthly. During the late 1860s, he was appointed the chief illustrator of the magazine, a position that helped him launch his career as one of the premier painters of the American landscape. Moran along with Albert Bierstadt, Thomas Hill, and William Keith are sometimes referred to as belonging to the Rocky Mountain School of landscape painters because of all of the Western landscapes made by this group. He began his artistic career as a teenage apprentice to the Philadelphia wood-engraving firm Scattergood & Telfer. He found the engraving process "tedious" and spent his free time working on his own watercolors. By the mid-1850s, he was drawing the firm's illustrations for publication rather than carving them and he began studying with local painter James Hamilton, who introduced him to the work of British artist J. M. W. Turner. Moran traveled to England in 1862 to see Turner's work and he often acknowledged that the artist's influence on his use of color and choice of landscapes. During the 1870s and 1880s, Moran's designs for wood-engraved illustrations appeared in major magazines and gift oriented publications. He was married to Scottish born Mary Nimmo Moran (1842–99), an etcher and landscape painter. The couple had two daughters and a son. His brothers Edward (1829–1901), John (1831–1902) and Peter (1841–1914), as well as his nephew Jean Leon Gerome Ferris (1863–1930), were also active as artists. He died in Santa Barbara, California on August 26, 1926. Moran's vision of the Western landscape was critical to the creation of Yellowstone National Park. In 1871, Dr. Ferdinand Hayden, director of the United States Geological Survey, invited Moran, at the request of American financier Jay Cooke, to join Hayden and his expedition team into the unknown Yellowstone region. Hayden was just to embark on his arduous journey when he received a letter from Cooke presenting Moran as.. "an artist of Philadelphia of rare genius. . ." Funded by Cooke (the director of the Northern Pacific Railroad) and Scribner's Monthly, a new illustrated magazine, Moran agreed to join the survey team of the Hayden Geological Survey of 1871 in their exploration of the Yellowstone region. During 40 days in the wilderness area, Moran visually documented over 30 different sites and produced a diary of the expedition's progress and daily activities. His sketches along with photographs produced by survey member William Henry Jackson captured the nation's attention and helped inspire Congress to establish the Yellowstone region as the first national park in 1872. The paintings of Moran along with the photographs of Jackson revealed the scale and splendor of the beautiful Yellowstone region more than written or oral descriptions, persuading President Grant and the US Congress that Yellowstone was to be preserved. Naturally proud of the role he played, Moran adopted a new signature: T-Y-M, Thomas "Yellowstone" Moran thereafter. After his involvement with Hayden expedition, Moran began publishing his work in various periodicals and produced several large paintings, including The Grand Canyon of the Yellowstone (1872) and Chasm of Colorado (1873–74), which were purchased by the US Congress to hang in the U.S. Capitol (now on view at the Smithsonian American Art Museum). Over the next 40 years, he traveled extensively. He was elected to the membership of the National Academy of Design in 1884 and produced numerous works of art in his senior years. Legacy The Thomas Moran House in East Hampton, New York is a National Historic Landmark. Mount Moran in the Grand Teton National Park is named for Moran.

Grand Canyon of Arizona from Hermit Rim Road 1912 (Color Chromolithograph)
By Thomas Moran
Located in Rancho Santa Fe, CA
A Chromolithograph published by the Atchison, Topeka and Santa Fe Railroad in 1912 after the original oil painting commissioned by the AT&SF railroad. According to Nancy K. Anderson,...
Category

Thomas Moran Chromolithograph Print 1893 of the Grand Canyon
By Thomas Moran
Located in Rome, IT
Created by Gustav Buek from an original oil painting made in 1892 by Thomas Moran. The painting is today owned by the Philadelphia Museum of Art in Philadelphia, Pennsylvania. Both w...
Category

"The Harbor of Vera Cruz Mexico (Klackner 53)" an etching signed by Thomas Moran
By Thomas Moran
Located in Milwaukee, WI
This black and white etching by American painter and print maker of the Hudson River School in New York: Thomas Moran, is a rare Klackner #53 of the catalogue raisonné, depicting "Th...
Category 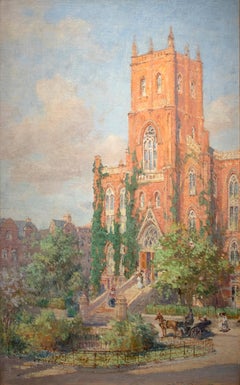 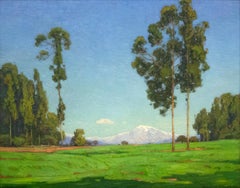