Thorsten Brinkmann was born in Herne, Germany in 1971. He studied Visual Communication at Kunsthochschule Kassel and Fine Arts at Hochschule für Bildende Künste, Hamburg. Brinkmann is known internationally for his unconventional photographic portraits and still lives, featured recently in T: The New York Times Style Magazine article, “Witty Photos That Play With Centuries-Old Artistic Tradition” (September 2015). Brinkmann has had solo exhibitions in Belgium, Germany and Mexico. His work is represented in museums throughout Europe and was included in Beyond Borders, The Fifth Beaufort Triennial, Belgium (2015) and Dress Codes: The Third ICP Triennial of Photography and Video, International Center for Photography, New York (2009). Following his 2012 residency at The Andy Warhol Museum, Pittsburgh, Pennsylvania, Brinkmann undertook La Hütte Royal, a yearlong installation project of transforming a dilapidated house in the Troy Hill area of Pittsburgh into a permanent artwork. A self-proclaimed serialsammlerti (“serial collector”), Thorsten Brinkmann keeps whatever catches his eye as he sifts through the broken and discarded items sitting in purgatory on thrift store shelves. Brinkmann incorporates his finds into photographs, which he then combines with the found objects to create his room-sized installations. In his Portraits of a Serialsammler series, Brinkmann photographs himself wearing his creative ensembles of fabric-scrap vests, pleated skirts for capes and trashcan helmets. In keeping with his affinity for concealment and surprise, he never shows his face. The images marry the traditional and absurd as his poses draw from centuries of Western painting conventions of old master portraiture. For example, a reclining figure may bring to mind Titian’s Venus of Urbino (1538), but Brinkmann never aims to replicate the exact painting. In another series, studio blue (“studio blossoms”), he arranges the secondhand objects into elegant still lifes that mine painting traditions like Dutch Vanitas. Weathered paint cans, chipped vases, a bicycle chain and miscellaneous bric-a-brac are given fresh life through playful recombination and reframing. In 2011, Thorsten Brinkmann received the Finkenwerder Art Prize, “awarded to artists who have made an extraordinary contribution to contemporary art in Germany.” He lives and works in Hamburg. 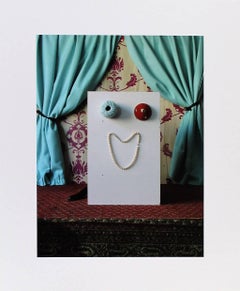 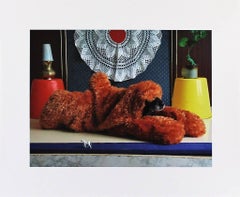 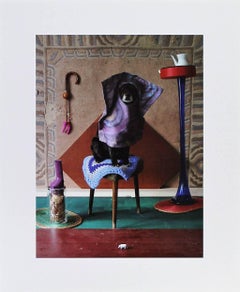 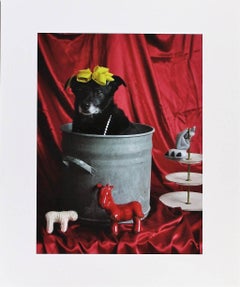 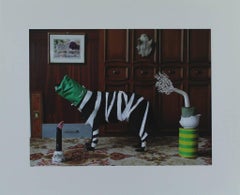 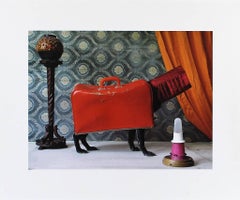