Walter Moras was a German landscape painter, who specialized to some extent in winter scenes. Moras was significantly influenced by the marine and landscape painter Hermann Eschke (1823–1900). In Berlin, where Moras was born, he gained his artistic training in Eschke's studio. In 1876, the young Moras staged his first exhibition at the Prussian Academy of Arts in Berlin. Thereafter, Moras's works were continually shown, in small numbers, at major Berlin art exhibits. Moras also participated in exhibits in Bremen, Oldenburg and Munich. At Eschke's recommendation, the young Moras painted scenes in Mecklenburg and on the large, craggy German island of Rügen. He also painted in Norway, The Netherlands and Italy. However, many of his works were created in rural Brandenburg and later in the Spreewald, both in the region of Berlin. He scarcely painted at all in Berlin itself, even though he was described as a "Berlin painter" all his life. Moras's style was realistic, influenced by a touch of melancholia, and generally simple and refined. Some of his evocative landscapes show Impressionist influences. In later years he was known for large-format autumnal scenes illuminated by warm fall colors. His numerous winter landscapes, which were composed with great attention to detail, similarly showed warmer hues amid the snowy context. Moras was not a member of the Berlin Artists Association, nor did he become involved with any of the north German artists' colonies, though he sometimes painted in their neighborhoods. In 1882, he married Ida Baluschek, the daughter of a Berlin railroad designer. Their son, Bruno, was born in 1883; Bruno Moras would also become a painter, but he was ever overshadowed by the reputation of his father.

The Journey Home
By Walter Moras
Located in Nutfield, Surrey
Walter Moras 1856-1925 Walter Moras was a Berlin born artist who was highly influenced by the atmospheric landscape paintings of Hermann Eschke who he eventually became a pupil...
Category 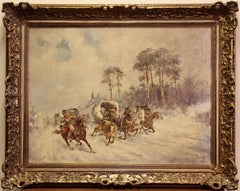 Walter Moras
The Farm in Spring, 1900

H 22 in. W 28 in. D 2 in.
On the Fjord
By Walter Moras
Located in Wiscasett, ME
Oil on Canvas, Signed lower left. Walter Moras 1856-1925 Walter Moras was a Berlin born artist who was highly influenced by the atmospheric landscape paintings of Hermann Eschke w...
Category

H 30 in. W 49 in. D 1 in.
Italian Sunset
By Walter Moras
Located in Houston, TX
German landscape painter Moras was significantly influenced by the marine and landscape painter Hermann Eschke (1823-1900). In Berlin, where Moras was born, he gained his artistic tr...
Category