William Dring, but was known colloquially as John. He was the brother of the artist James Dring, he married the painter Grace Elizabeth Rothwell and their daughter Melissa was also an artist. Dring studied under Henry Tonks at the Slade School of Fine Art, 1922–25 and emerged as a fine draughtsman, a sympathetic portrait painter (fond of using his family as subjects) and a deft watercolorist. Dring won several prizes and scholarships at the Slade. He then taught until 1940 at Southampton School of Art and became an official war artist. The Imperial War Museum owns 64 of his portraits in pastel (mainly of naval personnel who received battle awards) and five of his elaborately constructed oil paintings. He was elected an associate of the Royal Academy in 1944 when he showed a strong portrait of his daughter Melissa and after the war he became a noted exhibitor at the Royal Academy, being elected RA in 1955. Dring produced a string of boardroom and official portraits, including the presentation of the Freedom of the City of London to the then HRH Princess Elizabeth in 1947. In 1981, Dring was commissioned to record the five most influential benchers of Lincoln’s Inn, Mrs. Thatcher, Lord Denning, Mr. Megarry, Lord Hailsham and Lord Widgery. Dring exhibited at the Royal Academy London between 1945–70, exhibiting over 150 paintings. 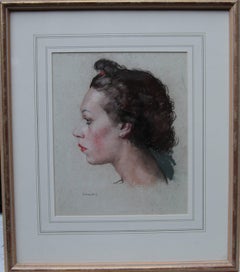 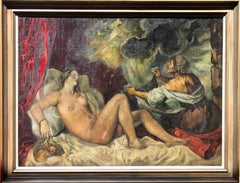 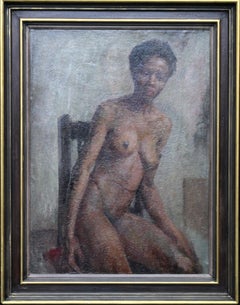 H 23.63 in. W 19.49 in.
Industrial Town
By William Dring
Located in London, GB
Dennis William Dring Industrial Town Oil on Canvas, signed lower right Image Size: 19.75 x 23.75 inches Original Frame We know this to be an early work by Dring as he has sign...
Category