William Lemos was born in New York on August 8, 1861. As a boy, Lemos earned money by wandering the streets and painting on request. Arriving in San Francisco in 1887, he established a studio at 106 Geary. With his wife Mabel, he worked in Los Angeles for a few years in the 1890s. After settling in Santa Cruz in 1896, he painted murals for many local businessmen. When the original Beach Casino was built there at the Boardwalk in 1904, Lemos was the first concessionaire and worked there for nearly 40 years. On his platform in the Casino, Lemos did paintings of redwoods, still lifes, forest fires, beach scenes, and marines. Many of his oils were done on redwood slabs, which were popular with the tourists; in the early days, these paintings sold for one dollar. 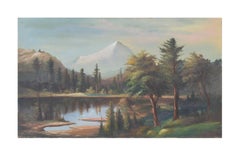 1900's Horses at the Trough
By William Lemos
Located in Soquel, CA
Category 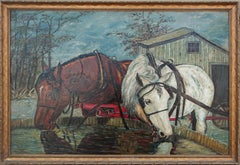 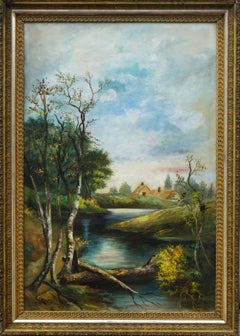 1900's Horses at the Trough
By William Lemos
Located in Soquel, CA
Category

Previously Available Items
Forest Glow by William Lemos
By William Lemos
Located in Soquel, CA
Oil painting of a forest fire in the Santa Cruz, California mountains by William M. Lemos (American, 1861 - 1942). When the original Beach Casino was built there at the Boardwalk in...
Category