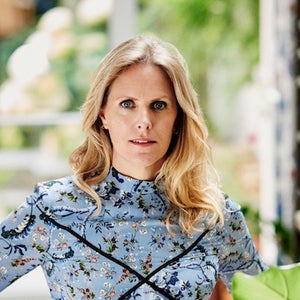 Drawing on 20 years’ experience in the interior design industry, Interior Designer Suzy Hoodless set up her eponymous studio in London in 2000. From a beach house in Barbados to a contemporary lodge in the Highlands and a townhouse in Kensington, Suzy has created stunning interiors for clients all over the world. 2018 saw the completion of the Studio’s work for Television Centre, formerly the main home of BBC Television.

Described by the Telegraph as “one of the true movers and shakers of the interiors world” and “Britain’s brightest tastemaker” by Harper’s Bazaar, Suzy’s latest project is the AllBright, the all-women’s Club which opened in 2019 in Mayfair. Formerly an auction house, the four storey building was spectacularly redesigned to accommodate a restaurant, bar, salon and treatment rooms which epitomise Suzy’s bold aesthetic whilst referencing classic design elements to create a timeless space.

Suzy is also currently working on a number of residential and commercial projects including a set in Albany, Piccadilly; a Georgian house in Highbury; a Townhouse in Holland Park, as well as an Arts & Crafts house situated in Hampstead, a converted artist’s studios in Chelsea and a country estate in Kent.

Now a fixture in House & Garden magazine’s top 100 interior designers, Suzy’s interiors have caught the attention of private and commercial clients. Suzy’s reputation as a designer has seen her feature regularly in publications including FT How To Spend It, The New York Times, Elle Decoration, The Sunday Times, The World of Interiors, House & Garden, Country Life and the London Evening Standard.